The Sweets bounce back in Game 3 and take the game 8-3. 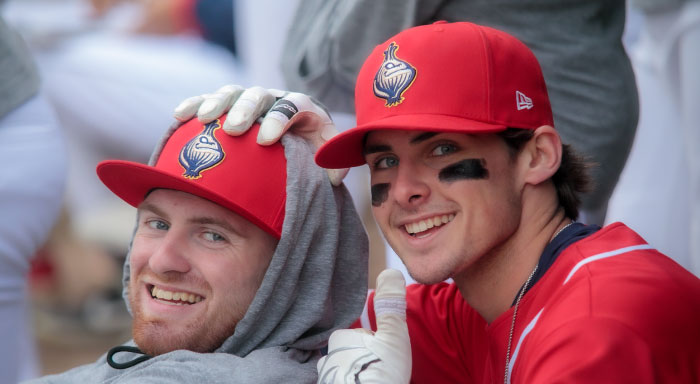 The Walla Walla Sweets maintained their edge atop the West Coast League’s South Division standings Thursday night with an 8-3 victory over the Bend Elks at Vince Genna Stadium.

Walla Walla improved its record to 13-5 after snapping a three-game losing streak. It leads three-time defending league champion Corvallis by one game. The surging Knights, who have won six straight games, slipped past Ridgefield on Thursday night, 2-0.

The Elks scored first in Thursday’s game that was delayed by 42 minutes at the start due to inclement weather.  Vinny Zavolta led off with a single and stole second. Designated hitter Dayton Provost brought in Zavolta with a two-out single.

The Sweets took their second lead of the series in the top of the third inning. Parker Price walked with one out and scored when Patrick Caulfield hammered the first pitch he saw from Bend starting pitcher Kyle Wade 401 feet over the left-field wall.

Andrew Mosiello threw the first three innings for the Sweets and struck out five. Relief pitcher Wyatt Boone followed with a scoreless fourth.

The Elks evened the score against Boone in the bottom of the fifth. Efry Cervantes drew a one-out walk and scored on a double by Chase Fernlund. Provost walked and Zach Needham loaded the bases with a single. Boone houdinied his way out of harm’s way by striking out Justin Parsons and Deron Johnson to end the inning.

The momentum carried over into the top of the sixth. Chazz Martinez greeted Elks’ reliever Andrew Clark with 411-foot blast over the right-center field wall. Cesar Lopez reached safely on an error by Bend first baseman Gabe Gonzalez, was singled to second by Jordan Stubbings, and scored on a left-center double by Caleb Farmer. One out later, Michael Petrie ended Clark’s mound stint with his first hit as a Sweet – an RBI single that scored Stubbings. Price welcomed reliever Joe Williams with a single to right that pushed Farmer across home plate, and Caulfield capped the five-run frame with a sacrifice fly to right.

Gonzalez homered off Dimick Wood to lead off the bottom of the sixth, but it would prove to be the Elks final run of the evening.

Wood, after getting out of the sixth, worked a perfect seventh. He struck out both Fernlund (swinging) and Provost (looking), and then got Needham on a fly to right.

Ben Fariss led off the Sweets eighth with a walk. One out later, he was forced out at second base when Price hit into a 4-6 fielder’s choice. Caulfield ended a productive offensive night with a double to right that scored Price.

Brayde Hirai allowed a single to Parsons to begin the eighth. But he fanned Johnson and got a 6-4-3 (Farmer-to-Price-to-Martinez) double play ball from Gonzalez to finish inning eight.

Hirai retired Jake Jarvis on a can of corn to left to start the bottom of the ninth. Zavolta singled, but Hirai K’d Cervantes for out No. 2. Fernlund singled, but Hirai got a ground ball to short from Provost that Farmer fielded on the run and threw a dart to Martinez at first for the game’s final out.

In all, Sweets pitchers struck out 12 on the night. 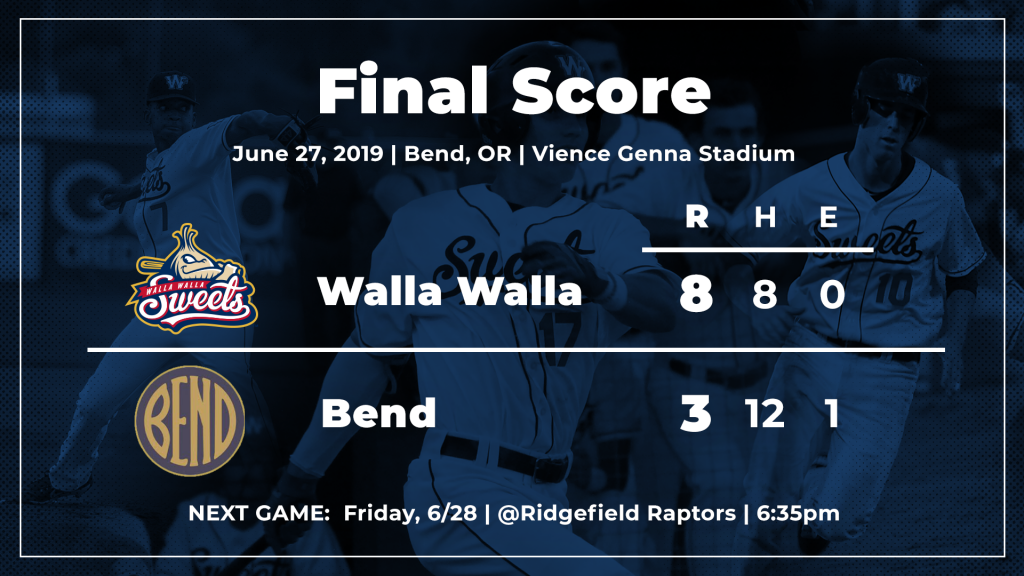