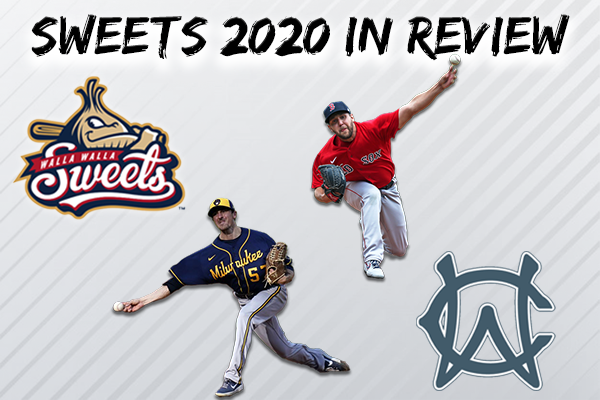 Despite the cancellation of the 2020 West Coast League season, the Sweets and the WCL made plenty of headlines in the off-season.

Fortunately for baseball fans, the recently-concluded 2020 MLB season took place. This gave a few former Sweets players the opportunity to make their mark on the 2020 season, including Red Sox starting pitcher Matt Hall. Hall, who was acquired by the Red Sox this past off-season from the Detroit Tigers, made his first start at Fenway Park and allowed three runs in 2 2/3 innings. He also struck out 2019 National League Rookie of the Year Pete Alonso in the first inning.

Hall, a Missouri State alum, played for Walla Walla in 2013. During that season, the southpaw posted an impressive 2.25 ERA while going 5-2 with 45 strikeouts. He played a big factor in leading the Sweets to the West Coast League North Division title.

Hall was selected as a fifth-round pick in the 2015 MLB Draft by the Tigers. He made his MLB Debut in 2018 with Detroit and spent two seasons in the Motor City before playing for Boston this past campaign.

Hall was not the only former Sweet to make a debut in the big leagues in 2020. Eric Yardley, a reliever for the Milwaukee Brewers, made his postseason debut in the wildcard round against the eventual World Series champion Los Angeles Dodgers. The 30-year-old right-hander held his own against the best squad in baseball, facing seven batters and striking out two while pitching 2 1/3 innings of scoreless baseball.

Yardley, a Seattle native, has enjoyed a successful start in his first two seasons in the big leagues. After posting 2.31 ERA in his rookie season with San Diego in 2019, Yardley took on a more prominent role in the Milwaukee bullpen and rose to the occasion. In 24 games this past season, he posted a 1.54 ERA with 19 strikeouts in 23 1/3 innings.

The 2020 MLB draft was also shortened due to the pandemic, dropping to 5 rounds from the usual 40 rounds this past summer.  The Sweets were still very well represented, as one alumnus and two 2020 signees saw their name called on draft day.  Outfielder Garrett Mitchell was selected by the Milwaukee Brewers 20th overall in the 1st round of the draft out of UCLA.  Mitchell was a member of the 2017 Sweets team where during his first at bat of the summer he sent the first pitch he saw over the scoreboard in right field at Borleske Stadium for a monstrous home run.

The Sweets made moves within the organization as well. The club announced Tommy Ott as the new Director of Sales and Operations for the team. An alma mater of Central Washington with a major in Sport Management, Ott began his career in sports last summer as an intern for Walla Walla’s sister team, the Yakima Valley Pippins. He then joined the Tampa Bay Rays as a stadium operations intern in November 2019 before finding a home in Walla Walla.

“I was very excited to join the team back in February of this year and was obviously very disappointed with having to cancel our 2020 season,” Ott said. “The lack of having a season gave Cody (Miller) and I time to work on things that we would normally not have time to work on, such as redesigning our online merchandise store and changing our POS system for our downtown store.”

Ott, like so many others in the Walla Walla community, is excited for baseball to return to Borleske Stadium.

“The main thing I am looking forward to for this upcoming season is being able to meet Sweets fans in person and interact with them on game days,” Ott said. “It was very strange to not have baseball this past Summer, but I’m looking forward to being a part of hosting events and games that bring our community together in 2021.”

The Edmonton Riverhawks were introduced as the 15th team in the WCL on September 15. The newest WCL team will play at RE/MAX Field, former home of the Pacific Coast League’s Edmonton Trappers.

“We are very excited to bring one of the best summer collegiate leagues in all of North America to Edmonton,” says Randy Gregg, Baseball Edmonton’s Managing Director. “In the 2019 Major League Baseball Draft, 90 West Coast League players were picked, including the No. 1 and No. 3 selections. Local sports fans will see future major league stars while they are playing in Edmonton during their college careers,” per the Riverhawks website.

Joining Edmonton as a Canadian expansion team will be the Kamloops NorthPaws, who were announced as the 14th West Coast League team on September 9. The team was introduced at a socially-distanced fanfare at their home field, Norbrock Stadium. The team hired 37-year-old Cole Armstrong as their first manager October 8. Armstrong has worked in Minor League Baseball with the Chicago White Sox organization since 2014.

“Kamloops and its residents have given so much to the sports community over the years.  It’s a privilege to be involved with an ownership group and front office that has its sights set on giving something back to The Tournament Capital of Canada.  I am excited to bring future Major League stars to Norbrock Stadium and with it, the chance for young fans to interact with them in a setting that only the West Coast League is able to provide,” Armstrong said, via the NorthPaws website.

Rounding out the new trio of WCL teams is the Nanaimo NightOwls. Based out of Nanaimo, British Columbia, the team was announced in July and has a history dating back over a century.

According to their website, the NightOwls nickname is a tribute to the city of Nanaimo for the field-light project that was recently completed. This project will allow night games at Serauxmen Stadium.

“We are thrilled to come on as the Founding Partner for the NightOwls to bring high-quality, collegiate-level baseball to Nanaimo,” said Kendall Gross, President at Island Savings. “Island Savings has a rich history with our local West Coast League baseball club in Victoria and we’ve seen, first-hand, the economic impact this team has in the community – a tradition we look forward to continuing in Nanaimo.” (via NightOwls website)