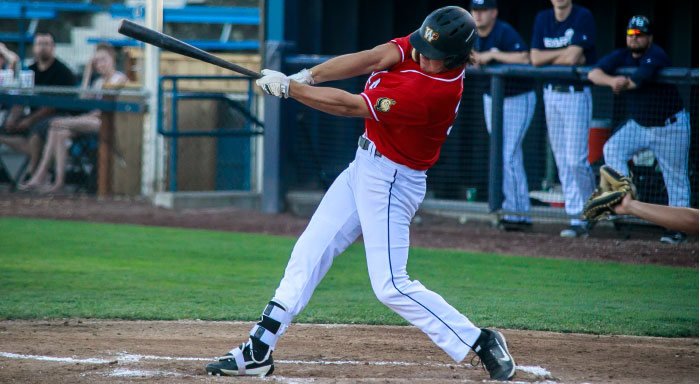 The Walla Walla Sweets built an 8-1 Tuesday night and held on for an 8-4 victory over the Highline Bears in non-West Coast League baseball action at Borleske Stadium.

Walla Walla, which began its season-opening homestand with three-game sweeps of two WCL South Division rivals – three-time defending champion Corvallis and Bend – posted the franchise’s 35th non-league win on Tuesday. The Sweets are now 35-4 in games outside the WCL and are 27-2 since 2012.

The Bears played little ball to plate a run in the first inning against Walla Walla starter Bryson Spagnuolo. Zach Spradlin led off with a single, moved to second on a grounder to first by Cole Chambers, advanced to third on a Kealen Martin infield out from shortstop to first, and scored on a single off the bat of Matt Franceschina.

Walla Walla got that run back and more in the home first. Cesar Lopez and Justin Folz drew back-to-back walks with one out and scored on a three-run home run to right field by David Le Bioda.

Spagnuolo struck out the side in the second inning. He fanned both Micah McNicoll and Trey Hunt swinging, and sandwiched a called third strike to James Kobylt between the first and third K’s of the frame.

The Sweets added to their lead in the second. Carson Green doubled to lead off and scampered home on a Ben Johnson single.

Walla Walla tallied another run in the third. Brandon Wagstaff stroked a lead-off single, raced to third on a throwing error by Highline starter Cole Trotignon and, after Brock Ephan was hit by a pitch, scored when Green hit into an around-the-horn double play.

Lopez started a two-run Sweets fourth with a one-out double. He scored on a Folz single. Folz stole second, but was picked off of second for out No. 2. Le Boida was hit by a pitch and Parker Price doubled him home to give the Sweets a 7-1 lead.

The Sweets final run came in the seventh. Price was hit by a pitch, stole second, and scored on a Wagstaff single.

Spagnuolo, Brennan Patterson, Andrew Mosiello, and Mason Kokodynski combined to limit the Bears to just one hit after their one-run, two-hit first and struck out nine in innings two through seven.

Martin smacked a three-run double in the eighth inning off reliever Dimick Wood to edge the Bears closer, but Wood recovered from his misfortune and retired the final two batters of the inning.

Highline got two batters on in the ninth inning, but Wood struck out Spradlin to end the game.

“I love how Andrew threw and Koko had a good inning,” Walla Walla coach Larry Price said. “We put pressure on the other team to pitch to us. If we keep hitting, we’ll be tough to beat down the road.”

The final game of the series is Wednesday night at 6:35. Fans who purchase merchandise during their time at the ball park will receive 40 percent off at the Sweets Shoppe.