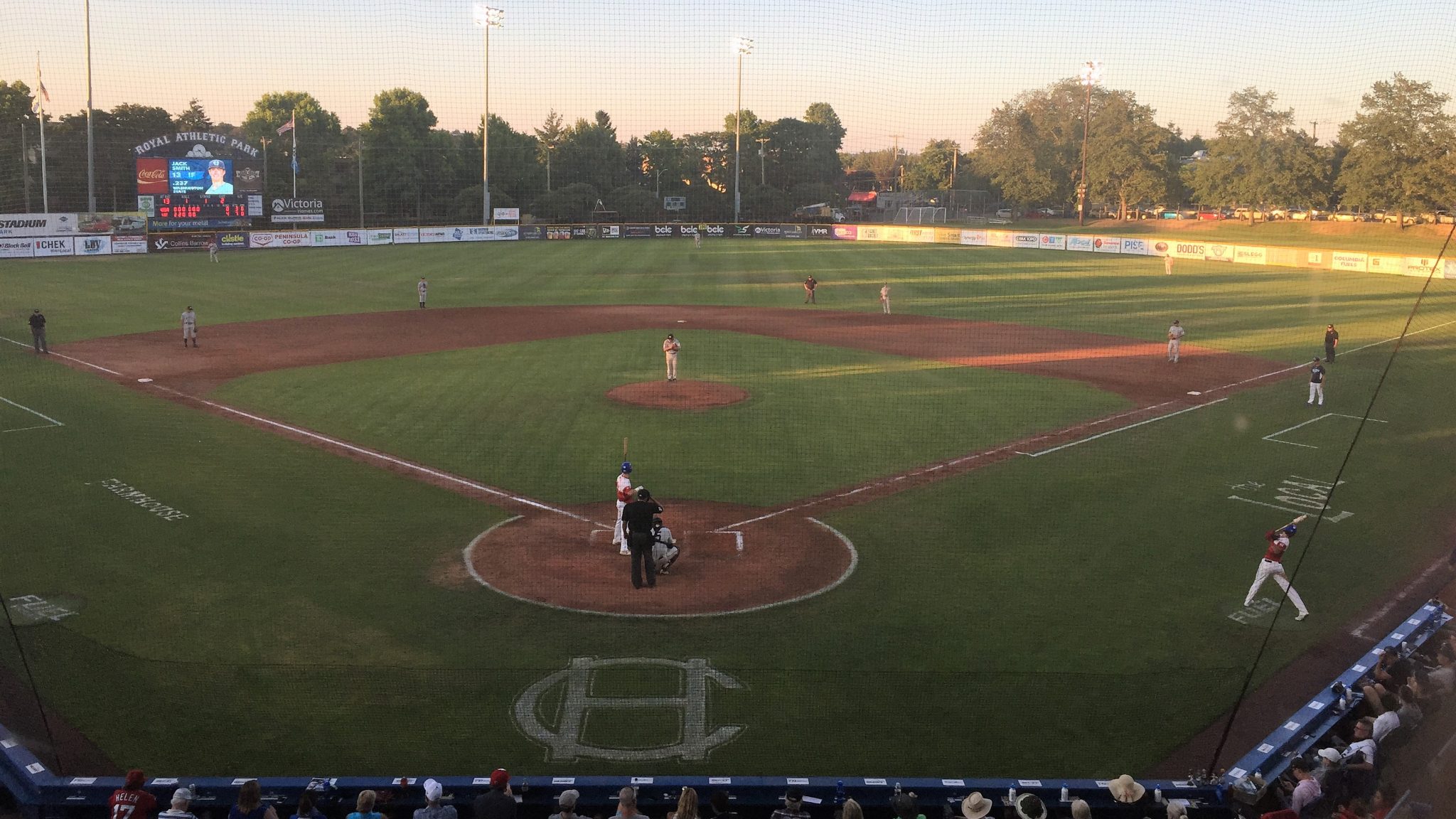 Victoria, B.C. – The lopsided-game streak continued Tuesday night but this time against a different opponent and in a different location. The Victoria HarbourCats hammered the Sweets at Royal Athletic Park on Tuesday night by a final score of 10-3.

The scoring got started early for the Cats as they jumped on the board in the bottom of the first off Sweets starter Sean Sullivan. A single, a double and a walk loaded the bases right away with nobody out in the inning.

A sacrifice fly to the next batter drove home the runner from third to make it 1-0. With runners on the corners and one away, a slow roller to second base left only the play at first which pushed home another run to give Victoria a 2-0 lead.

Things went from bad to worse for Walla Walla in the bottom of the third inning. Hunter Vansau led off the inning by hammering a homerun off the scoreboard in left field to give the Cats a 3-0 lead.

Back-to-back singles after that put runners on first and third with still nobody out. Then a ball hit down the line into right field was fielded on hop by Cesar Lopez with the runner from third scoring easily.

Lopez’s throw back in to second base was overthrown which scored a second run on the play to extend the Victoria lead out to 5-0. A flyout and a groundout kept the runner on second base with two outs.

Jaxxon Fagg then came up and hit a ball that might still be traveling. The shot soared over the left field scoreboard for a two-run homerun to extend the lead out to 7-0.

That ended the day for Sullivan on the mound. Samuel Reed then took over and got the final out of the inning to end the five-run frame.

The HarbourCats tacked on once again in the bottom of the fourth after a single to lead off the inning. After a flyout and a stolen base, Michael Malinchak singled into left field to drive home the runner from second which moved the score out to 8-0 in favor of Victoria.

The Sweets scored their first two runs of the game on one swing of the bat in the top of the sixth inning. Nick Nyquist led off the inning by drawing a four-pitch walk.

Jordan Hovey then came up and smoked a shot deep into right field. It cleared the wall for a two-run homerun which trimmed the lead down to six at 8-2.

Dimick Wood took over on the mound for the Sweets in the bottom of the seventh inning for his first pitching appearance of the summer. After a pop-out and a groundout to start the frame, Dustin Demetter drilled a wall-scraper homerun over the right field fence for a solo shot to extend the lead back out for Victoria at 9-2.

In the bottom of the eighth, Wood walked the leadoff batter of the inning. AJ Lewis was called on to pinch run for the Cats, and he promptly stole second base.

The throw down to the bag on the play was right in-line with the runner’s path. As a result, Lewis wound up kicking the ball away as he slid in.

The ball then squirted away from both Sweets infielders and got into shallow left field. That allowed Lewis to come all the way around and score on the play which extended the lead out even further at 10-2.

Walla Walla did not go down without a fight at the end. In the top of the ninth with Tyler Yoshihara on the mound and one away, Jack Filby smacked a single into right field.

Danny Sinatro then grounded into a fielder’s choice right back to the mound where the out was made at second base. A Lopez single then put runners on first and second with two outs in the frame.

On a 3-2 count, Matt Whitney peppered a ball back up the middle for an RBI single to give the Sweets their final tally. Nyquist then flew out to center for the final out as the HarbourCats sealed the victory in game one by a final score of 10-3.

The Sweets take to Royal Athletic Park once again on Wednesday evening to try to even the series against Victoria. First pitch of game two is slated for 6:35 PM.