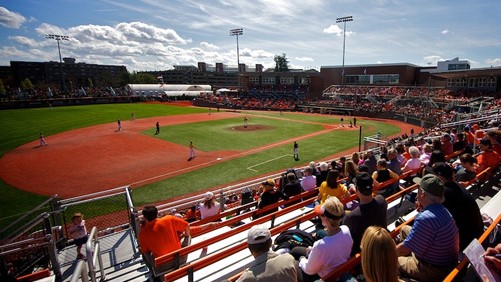 Corvallis, Ore. – Currently amid their ninth season playing in the West Coast League, the Sweets put up the highest scoring total in the club’s history on Saturday night. A seesaw game early turned into a blowout late as Walla Walla won big over the Corvallis Knights by a final score of 18-5.

The scoring got started early for the Sweets as Ryan Johnston led off the top of the first with a double deep to left-centerfield off Corvallis starter Daniel Slominski. Following a walk and a strikeout, Zach Penrod then smoked a ball back up the middle that should have been ruled a single, but instead was scored an error, as it got past the second baseman and into centerfield to score Johnston and make it 1-0.

With runners on the corners, Jack Filby strode to the box and lifted a flyball into shallow centerfield that dropped in and scored Danny Sinatro for a quick 2-0 lead. Cesar Lopez capped off the first inning scoring as he ripped a single into right field to plate Penrod and make it 3-0.

Sweets starter Sean Sullivan had an uncharacteristically shaky outing as the Knights swung right back in the bottom of the first. The first three batters of the game for Corvallis reached base safely on a single and a pair of walks which loaded the bases with nobody out.

Then a slow roller to Filby at short resulted in only an out at second as the fielder’s choice scored the runner from third to make it 3-1. The next batter Cameron Haskell singled to the outfield to push across another run and trimmed the lead down to one at 3-2.

The Sweets continued to roll in the top of the second as an error, a single and a passed ball put runners on second and third with one out. Nick Nyquist then hit a ball deep to centerfield that bounced in and out of the glove of Elliot Willy. The miscue scored Johnston from third to make it 4-2.

With runners once again on second and third and one out, Penrod hit a grounder to the right side of the infield that scored Sinatro on a putout at first which pushed the lead back out to three at 5-2. Filby followed with a single back up the middle to score Nyquist and make it 6-2.

There would finally be a full inning of scoreless baseball, as the bottom of the second and the top of the third went by quietly.

The Knights rallied to put an end to the silence in the bottom of the third with a runner on first and two outs. Austin Feist ripped a double deep to left-centerfield that hit off the wall and allowed the runner from first to come all the way around to score to make it 6-3. Another double and a single pushed across two more runs in the frame and cut the lead back down to one at 6-5.

Walla Walla punched right back though to give themselves a comfortable margin once again. The first two batters of the top of the fourth reached on a hit-by-pitch and a walk. A wild pitch got past the Knights’ catcher Briley Knight which moved both runners into scoring position at second and third with one out.

Filby then hit a high chopper to the first baseman and the throw came to the plate. Sinatro slid in just ahead of the tag as the fielder’s choice went down without an out recorded and a run scored with the lead extended out to 7-5.

The next batter, Lopez, hit a grounder to the second baseman that looked to be a double play ball. However, the shortstop could not corral in the throw cleanly, which let everybody reach safely and scored another run to make it 8-5.

A walk and a strikeout loaded the bases with two outs in the frame. Tyler Pritchard ripped a single back up the middle to score a pair of runs as the lead swelled out to five at 10-5.

The avalanche of scoring finally came to a halt for both teams after the fourth inning.

Brayde Hirai took over for the Sweets on the mound and was nothing short of exceptional in getting control of the game. He finished the game and went six and a third innings with seven hits, one walk, three strikeouts and no runs allowed.

With the game firmly in hand late, the Sweets decided to turn it into a runaway as they poured it on in the top of the ninth off Knights pitchers Jacob Fricke and Jordan McDaniel. Seven hits, four walks and a hit-by-pitch wound up scoring eight runs in the frame for the Sweets.  This gave the Walla Walla 18 runs on the night, the highest scoring total in a single game in the team’s WCL history. The final tally was 18-5.

Walla Walla is back at it in Corvallis for a doubleheader on Sunday with the first game scheduled for 12:30 and the second game beginning a half hour after the conclusion of the first.