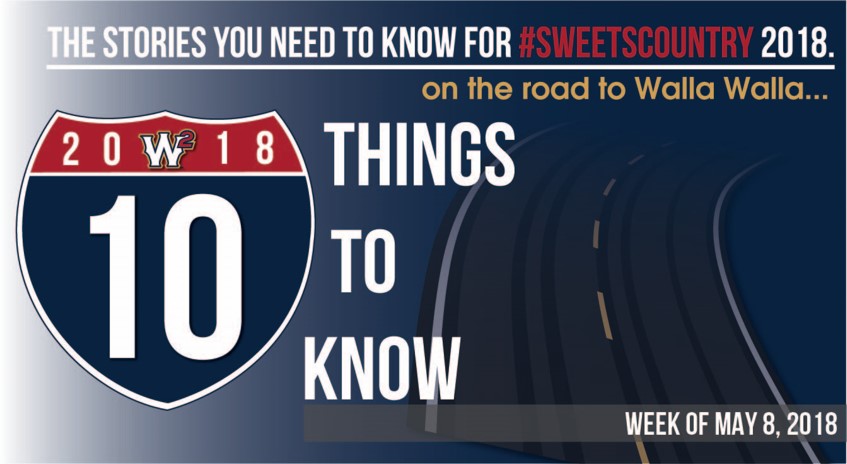 With Opening Day a month away and the college baseball regular season winding down, stay up to date with how our players are performing with another edition of “10 Things to Know”!

1. One of the best performances of the year for any Sweets player, past or present, was put together by Zach Penrod (Utility) for Northwest Nazarene University last week. The Nighthawks hosted Western Oregon and split the four-game series, but Penrod went OFF. He went 12-17 with eight runs scored, four RBI, three doubles, a homerun, two walks, had a five-hit game on Friday and was just named to the GNAC Baseball All-Conference second team.

2. Central Washington University went on the road for a four-game series against Montana State University Billings in a late week matchup that saw the two teams split the series two-to-two. Mitch Lesmeister (IF) was exceptional throughout for CWU as he went 8-for-15 with four runs, six RBI, a double, a homerun and two walks. Jalen Garcia (OF) was held in check for MSUB, relatively speaking, as he went 3-for-15 with a run scored, two RBI, a double, a triple and was just named to the GNAC Baseball All-Conference first team. Carson Woolery (RHP) appeared in one game for the Yellowjackets and surrendered just one hit over one inning and added a strikeout.

3. Nate Ostmo (IF) has put together a strong finish to his junior season as he helped Dartmouth sweep a three-game Ivy League series against Princeton. Ostmo went 5-for-12 with four runs scored, two RBI, a triple, a homerun and two walks. (HIGHLIGHT)

4. USC hosted the University of California in a Pac-12 matchup over the weekend that saw the Trojans take two of the three games. Tyler Pritchard (IF) was a big part of USC’s victories as he went 4-for-10 in the series with four runs, three RBI, a double and a homerun. (HIGHLIGHT)

5. UC Irvine was able to take two of three games at home against the University of Oregon this past weekend. Dylan Riddle (LHP) appeared in all three games for Irvine and surrendered just one run in 2.0 innings of work and added a strikeout.

6. An upcoming matchup where Sweets fans will be able to catch some future players in action will be when Dartmouth hosts Harvard in a three-game Sunday-Monday series. Nate Ostmo (IF) will take to the field for the Big Green and Jake Suddleson (OF) will oppose him for the Crimson. Information on how to follow the games can be found here: LINK

7. Sweets head coach Frank Mutz has to be pleased with how Chaminade College Prep High School has been performing as of late. With a 10-4 victory against Notre Dame, Sherman Oaks yesterday, his team has now won four straight with four games remaining on the schedule before they gear up for the playoffs.

8. Washington State hosted #3 Oregon State in a series over the weekend that saw the Cougars drop two games and had the final game end in a 10-inning tie. Former Sweet J.J. Hancock (OF) appeared in all three games for WSU and went 4-for-8 with three runs, an RBI, a homerun and two walks.

10. California Baptist University defended their home turf as they were able to sweep Academy of Art University in a four-game mid-week series. Former Sweet John Glenn (IF) appeared in two games and went 2-for-8 with one run, three RBI, a homerun and is now hitting .322 on the season.