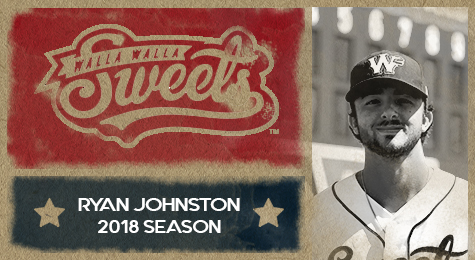 Walla Walla, WA – A league leader in getting on base and one of the best two-way players in the West Coast League, along with a powerful left-handed pitcher with plenty to prove, will be returning to the home-side dugout for the 2018 season. OF/RHP Ryan Johnston, a redshirt sophomore for the UC-Irvine Anteaters, and LHP Dylan Riddle, another redshirt sophomore for the ‘Eaters, will both be returning to Walla Walla for the 2018 WCL campaign.

“RJ continues to be a quiet leader in the clubhouse, on the road, and in our community,” said Sweets president Zachary Fraser. “In addition to be a great baseball player, he provides a great example to our young fans.

“I’m excited that he is becoming one of the few players in Sweets history to be invited back for a third full season.”

In addition to the intangibles that he brings to the table, Johnston was one of the most effective two-way players on the circuit. He finished third in the league with a .467 on-base percentage, often in the leadoff spot for the Sweets. His ability to get on base, by hook or by crook, is something that Frank Mutz and his staff are looking forward to putting to good use once again. When he wasn’t patiently pacing the offense, he was a deceptively effective relief pitcher. In 17.1 innings pitched, primarily in short relief, he struck out 15 while walking only 2. His versatility and his experience have the Sweets anxious to have him back in the lineup.

“I am very excited to have another opportunity to be back in Walla Walla,” said Johnston. “I love the atmosphere Walla Walla brings and the amazing family I’ve created with my time (in the community).

“I look forward to getting out there with a new group of guys and hopefully bring the team a championship.”

This will be Riddle’s third season in the WCL, second in Walla Walla after spending the 2016 campaign with the Wenatchee AppleSox. He featured electric stuff last season despite results that were decidedly mixed. Early in the season, he was dominant, and was among the league leaders in key statistical categories. He faced a slump in the middle part of the year, as he was part of a pitching staff that battled a record number of injuries. Sweets coaches are confident in Riddle’s ability to both start and offer relief in the bullpen, given what pitching coach Raul Camacho saw over the course of the season.

“Just the competitiveness,” said Camacho when asked what stood out for him about Riddle over the course of the season. “He’s a student of the game and wants to do the work to get better. There wasn’t a time when he was ‘unavailable’ to pitch…

“He carried our staff early in the summer, even coming back from an injury. I think he just hit a wall as the innings built up, and with another year removed from the injury, I think we will see more of the Dylan we saw early – and that is pretty special.”

Camacho went on to note that the toughness of both players in indicative of the Anteater program, believing that both are important pieces in the singular effort to bring a WCL to Walla Walla. For his part, Riddle is looking forward to returning to a great community that embraced him and made him feel at home.

“It’s a blessing to be playing in such a great community with an amazing fan base,” said Riddle. “I look forward to getting back out at Borleske and helping bring Walla Walla a West Coast League title.”