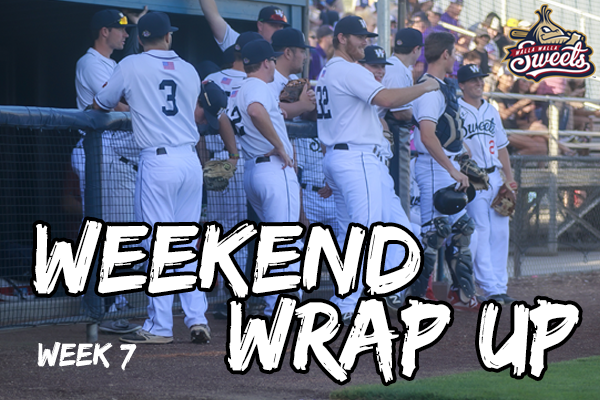 As we now enter April on the spring calendar, conference play is in full swing across the country for college baseball.  Sweets past and present were once again filling the box score, highlighted by some dominating pitching performances.

All that and more as we dive into this week’s edition of the Wrap Up.

Wood You Believe It

Dimick Wood was the only pitcher needed for the College of Idaho on Saturday.

The junior right hander and Sweets 2018-19 alum started for the Yotes in game one of their Saturday double header against Corban University and went the distance, allowing 3 runs on just 3 hits while striking out 10.  The College of Idaho would win 4-3, with Wood picking up his second win on the year.

The complete game effort by Wood helped him get back on track after a rough outing his last time on the mound, as the right hander improved his season strikeout total to 46 on the season against 16 walks.

The College of Idaho continues play next weekend against Eastern Oregon, as Wood has proven to be a big part of the Yotes pitching rotation this season.

The Western Oregon senior and 2018 Sweets alum was outstanding in his start this past Friday.  Peterson picked up the win, as he would go 8 innings for the Wolves allowing just 1 hit and striking out 9 in their 4-0 win against St. Martin’s in game one of Friday’s double header.

Peterson flat out dominated the Saint Martin’s lineup.  The right hander retired 23 of the 26 batters he faced in his outing, as he continued his great start to the season on the mound.  Peterson is now 3-0 on the season in 4 starts and sports a 1.57 ERA in his 23 innings of work.

Western Oregon travels to Northwest Nazarene next weekend to face the red hot Nighthawks, where Peterson looks to continue his great pitching form.

Momma, There Goes That Man

Stop us if you heard this one before:  Isaac Esqueda pitched another fantastic game USC.

The junior left hander and 2017 Sweets alum has become a mainstay in our featured players this year, and it’s easy to see why.  Week after week, Esqueda takes the mound for the Trojans and turns in a great performance.

This past weekend was no different.  On the road facing in-state rival University of California, Esqueda impressed again, going 8 innings allowing just 1 run of five hits and striking out 6.  The only blemish was a season high 5 walks, but the veteran lefty was able to work around it throughout the game as the Trojans would go on to win the game 6-1.

END 7 | Another strong inning for Esqueda as he strands a runner with the K!

Esqueda picked up his third win on the season, and now has a 3-1 record on the year with 41 strikeouts and an impressive 2.27 ERA in 43 ⅔ innings of work in 7 starts.

USC is back at home next weekend against Dixie State, with Esqueda expected to be the Friday starter for the Trojans.

Sophomore Jacob Blas (Sweets 2017 alum) was a combined 5 for 13 with an RBI at the plate this weekend for the Arizona Wildcats, as they won two of three games against in-state rival Arizona State.

Cal Baptist senior first baseman John Glenn (‘17) was a combined 5 for 15 with 3 RBI’s on the weekend, as the Lancers won three of four games on the road against UT Rio Grande Valley.

Cal Baptist senior right hander Matt Amrhein (‘17) picked up the win in game one of Friday’s double header 3-2 win against UT Rio Grande Valley.  He went 3 ⅔ innings, allowing no runs on 3 hits and struck out 5.  The win was Amrhein’s second of the season.

He strikes out 3⃣ straight batters to leave the go-ahead run on third base.#LanceUp⚔️ pic.twitter.com/OPSQ712Luu

Cal State Fullerton junior left hander Timothy Josten (‘17) pitched 1 ⅓ innings of scoreless ball Saturday.  Working his way back from an injury this season, Josten allowed only 2 hits and struck out a batter in the Titans 8-2 loss to San Diego.

California right hander Sean Sullivan (‘18) started Saturday’s game against the visiting USC Trojans.  The junior went 4 ⅔ innings, allowing just 1 hit and striking out 7 while not allowing a run in the Bears 5-1 win.

The Dahle brothers both pitched for the College of Southern Idaho this weekend.

Sophomore right hander and Sweets signee Jake Dahle started in game two of Friday’s double header against Utah State Eastern.  Jake went 6 innings allowing just 1 run on 4 hits while striking 6, as he picked up the win in the 3-1 victory.

Sweets signee Jordan Stubbings went a combined 4 for 7 for Colorado Mesa this past Tuesday.  The junior infielder added 2 RBI’s, a home run and a triple to help the Mavericks win both games of the double header against Adam’s State.

Senior Brock Ephan (‘19) went a combined 6 for 16 on the weekend for Lewis-Clark State College.  The power hitting infielder added 7 RBI’s and 3 doubles as the Warriors took all four games against Oregon Tech.

Sweets signee Mason Kokodynski pitched a scoreless inning for LMU on Saturday, striking out 1 batter in their 9-4 loss to the University of San Francisco.

Montana State Billings infielder Carson Green (‘19) went a combined 7 for 20 on the weekend.  The sophomore added 6 RBI’s, a double, and two home runs for the Yellowjackets in their series against Central Washington.

University of California Santa Barbara junior Conner Roberts (‘17) pitched 4 ⅔ innings of relief in game two of Saturday’s double header against the University of Hawaii.  The right hander allowed 2 runs on 2 hits and struck out 5 in the Gauchos 6-5 loss.

University of Oregon right hander Andrew Mosiello (‘19) closed out the game for the Ducks on Saturday.  The freshman went 2 innings allowing 3 hits and striking out 5 as Oregon defeated New Mexico State 6-1.

Redshirt junior catcher Michael Petrie (‘19) went 3 for 11 on the weekend for the University of Washington.  He added an RBI and a double as the Huskies went 2-1 in their series against UCLA.

Senior infielder Tyler Pritchard (‘18) went 3 for 10 with an RBI at the plate over the weekend for USC as they lost the series against California 2-1.

T2 | Pritchard adds to the lead!

Sweets signee Caden Kaelber came on in relief on Saturday for Washington State.  The lanky right hander went 1 inning, allowing 1 earned run on 1 hit while striking out a batter in the Cougars 10-9 win in extra innings against Stanford.

Whitman right hander and Sweets signee Ben Ortiz appeared in a relief appearance in game two of Friday’s double header against Linfield College.  The junior went 2 innings, giving up just 1 hit while striking out 2 in the Blues 4-2 loss.

Sweets signee Travis Craven pitched in two appearances for Whitman College this weekend.  The left hander went a combined 2 ⅔ innings of relief work, allowing just 1 hit and striking out 2.  Craven picked up the save in game one of Friday’s double header against Linfield.