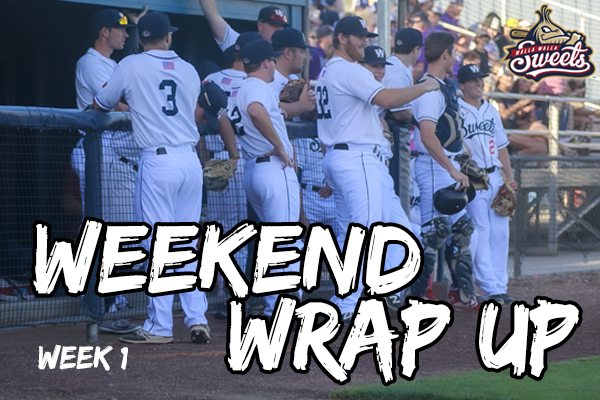 College Baseball officially returned this past Friday after nearly 12 months away from the diamond.

After the 2020 season was cut short by the COVID-19 Pandemic, student athletes and universities across the country rejoiced as they returned to the field for the 2021 campaign.  Included were the many Sweets alumni and current players signed for the upcoming summer season.

We take a look back at the best of the action and highlight some of the notable appearances and plays made.  Here’s the best of Week One:

We’ll start on the West Coast, where eight Sweets players saw their name in the lineup card for opening weekend in the PAC 12.

Infielder Jacob Blas (Sweets 2017) started at shortstop and batted second for the University of Arizona in their season opener Friday.  Blas went 1 for 3 with a walk in the Wildcats 3-0 home win on opening night against Ball State University.

Blas would also start the final two games, reaching base safely 6 times in 17 plate appearances during the weekend.  The Wildcats would lose the remaining two games in the series and are now 1-2 to start the season.

The UCLA Bruins also kicked off their season at home, playing a three game set against the University of San Francisco Dons.  The Bruins have several former Sweets players on their roster including senior outfielder Patrick Caulfield (2018-19) and redshirt freshman outfielder Emanuel Dean (‘19).

But it was infielder Jack Filby (‘18) who Bruins manager John Savage put in his starting nine for the season opener.  Filby, the designated hitter and batting 8th, was 0-2 with two walks in the Bruins 6-2 loss to the Dons on opening night.  Filby, starting and playing in all three games, finished the weekend 3 for 9 including a Saturday performance that saw him go 2-4 with an RBI and two runs scored in the Bruins 8-2 win.

Caulfield played in the final two games for UCLA, including starting Sunday’s game in left field and batting 8th.  He was hitless on the day, as the Bruins dropped the rubber match 8-3 to the Dons and fell to 1-2 on the year.

Staying in the PAC 12, just across town the USC Trojans were taking on the Loyola Marymount Lions.  The series featured a split of home games, with the first two played at the Trojans home Dedeaux Field and the final game Sunday at LMU’s Page Stadium.

Esqueda and Pritchard got things going in the opener on Friday, with Esqueda taking the mound for the Trojans to start the season.  After a shaky first inning where he surrendered two runs, the lefty settled in. Esqueda would strike out the side in the next inning and didn’t look back, as he would not allow another run the rest of the night.  He would go 5 innings, allowing just the 2 runs on 6 hits while striking out 7.

MID 2 | That was more like it. Esqueda strikes out the side to bring the Trojan bats back up.

The win would escape the lefty tonight, as USC left it late and rallied to tie it in the 7th before (literally) walking off the Lions on a bases loaded walk in the 9th to take the 3-2 win in the season opener.

Pritchard started at 2B but was hitless in his two at bats before being replaced by Cirillo at 2B in the 6th inning.  Cirillo would strike out in his one plate appearance on the night.

Cirillo, son of Sweets manager Jeff Cirillo, would see his name in the starting lineup Saturday and Sunday, hitting 8th and playing at 2B both days.  He was 2 for 3 on the day with a run scored in the Trojans 5-0 win.

The Trojans would drop the Sunday matchup, as the Lions won in extras 9-8 (F/11).  Cirillo chipped in going 2 for 5 on the day with a double and 1 run scored.  The Trojans are now 2-1 on the young season.

Elsewhere in the Pac 12, the Oregon State Beavers opened their season in Arizona playing in the Sanderson Ford College Baseball Classic.  Junior pitcher Reid Sebby (Sweets 2019) pitched 1 ⅔ scoreless innings for the Beavers Saturday in their 14-1 route of the New Mexico Lobos, as OSU went a perfect 3-0 on the weekend to start their season.

The University of Washington started on the road, playing UC Irvine to open their season.  Redshirt junior catcher Michael Petrie (Sweets 2019) started and was behind the plate for both games over the weekend.  He was a combined 1 for 6 with an RBI and run scored while also throwing out one base stealer during the Huskies first two games.  UW lost both games 4-5, and are 0-2 to start the season.

The weekend series between the Northwest Nazarene Nighthawks and the College of Idaho Yotes saw five former and current Sweets players on the Nighthawks roster to start the season.

Schwehr got things going in the first game of the double header Saturday.  The lefty threw 2 scoreless innings in a relief appearance, striking out 2 in the Nighthawks 5-1 victory.

Game 2 saw Johnson enter the starting lineup and was behind the plate, going 1-4 on the day with a run scored.  Hueckman came on in relief and pitched 2 innings, striking out 2.  Irwin came on late in the game and pitched a scoreless ⅔ of an inning.  NNU would go on to win the game 8-6 and are 2-0 to start the season.

Ahead of the Game

While most of Division 1 baseball started Friday, some teams have already gotten off to a head start with their season.  One of those being Lewis-Clark State College, home to 2021 Sweets signee Jack Sheward and 2019 alum Brock Ephan.

The Warriors began play on February 4 and are 7-1 on the season.  Sheward, a catcher, is taking a redshirt this season but Ephan is a main stay in the LCSC lineup.  Starting in all 8 games, Ephan is batting .242 with 1 home run, 2 doubles, and 4 RBI.  The Warriors will play their first game at home this Saturday in a double header against Oregon Tech.

Senior pitcher Matt Amrhein (Sweets 2017) picked up the save for California Baptist University Saturday, going 3 ⅔ scoreless innings.  The right hander struck out 5 while only surrendering 2 hits in the Lancers 6-2 win Sunday.

Also a senior for the Lancers, first baseman John Glenn (’17) started all 3 games this weekend against Pepperdine.  Glenn was just 3 for 14 on the weekend, but picked up 3 RBI’s for CBU as they started the season 2-1.

Cal State Fullerton senior pitcher Timothy Josten (’17) went 3 1/3 innings in a 15-1 decking of the visiting Utah Utes on Sunday.  The southpaw allowed just 1 run on 3 hits while striking out 4.  The run was unearned.

Other Sweets players set to have their colleges begin play this weekend: