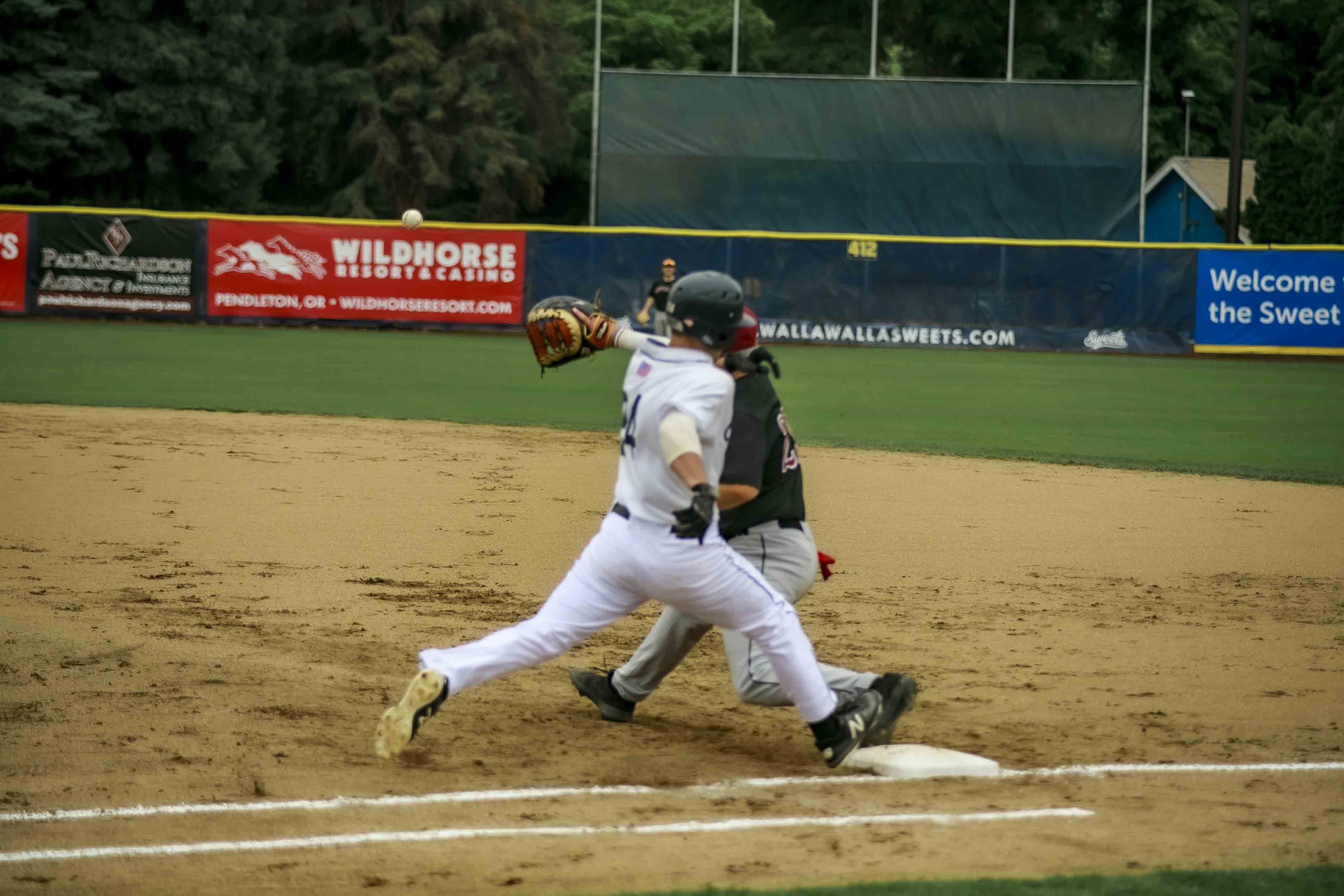 Game two of the series is Wednesday night at 6:40 at Oregon State University’s Goss Stadium at Coleman Field. If a third game is necessary, it would be played in Corvallis on Thursday night at 6:40.

The Sweets, making the franchise’s third postseason appearance (2012 and 2013), achieved win No. 30 on the road Saturday night with an 11-5 trouncing of Yakima Valley. Centerfielder Patrick Caulfield and pitcher Travis Craven set all-time league records during the game. Craven tossed the first inning-and-a-third in his 13th start of 2019 and Caulfield stole his 41st base of the season in the sixth inning.

Walla Walla began its season with the best start in franchise history. The Sweets opened 2019 by sweeping a three-game series with the Knights at Borleske Stadium by scores of 8-2, 6-3, and 5-3. They followed that up by brooming Bend, 3-0, 9-6, and 16-11. Caulfield was named the West Coast League’s first Player of the Week after going 14-for-25 (.560 avg.) with seven stolen bases in the half-dozen contests.

Following a pair of non-league wins at home over the Highline Bears to complete a spotless season-opening homestand, the Sweets traveled to Wenatchee for a three-game series with the playoff-bound AppleSox over Father’s Day weekend. The series opener was highlighted by a two-out, two-run home run by Carson Green in the ninth inning that was the difference in a 3-1 Walla Walla win. The Sweets won game two of the set to improve to 8-0 in the WCL, but dropped the finale.

Walla Walla returned home for a six-game homestand and registered series wins over Portland and Port Angeles. Big blows during this Borleske stay were a three-run homer by Caulfield in the series opener with Portland and a ninth-inning, walk-off bomb by Chazz Martinez in the middle game of the Port Angeles series, won by the home team by a 9-8 count.

The Sweets went 3-3 on their first six-game road trip that closed out the month of June. Walla Walla dropped the first two games in Bend, 4-2 and 2-1, but rebounded for an 8-3 triumph in the series finale. It carried that momentum to Ridgefield and won the first two games of that set, 5-2 and 13-9, before dropping the last game of the series 6-3.

July started with a three-game home series with the Cowlitz Black Bears. The Sweets clobbered Cowlitz, 13-4, in the opener, dropped a heartbreaking 7-6 decision in the middle game of the series, then celebrated the Fourth of July with a 6-4 conquest.

Walla Walla traveled north the first weekend of the month and dropped two out of three games to Kelowna to end the first half of league play with an 18-9 record. The Sweets did win the north-of-the-border finale, 6-3, then split two games in Bellingham, losing the opener 4-1 and taking the next outing, 11-7. The Sweets scored all of their runs in the victory over the Bells with two out.

Disappointment was the order of the week after non-league games with the Military All-Stars and Cascade Collegiate League. Walla Walla lost two of three games against Victoria, including a 19-inning marathon, and suffered a road sweep in Corvallis before heading into the All-Star Break.

Caulfield, infielder Justin Folz, and pitchers Craven and Reid Sebby represented the Sweets in the WCL’s version of the mid-summer classic.

Walla Walla resumed league play with a series win over Wenatchee at Borleske Stadium. The big highlight was provided by utility specialist Ryan Johnston, who no-hit the AppleSox for six-and-a-third innings in game two of the series. He ended up with six-and-two-thirds innings worked, allowed just one run and one hit, and struck out eight.

The Sweets won three and lost three on their final six-game adventure away from Borleske Stadium that took them to Cowlitz and Portland, closed out the month of July, and spilled into August. Walla Walla got the big bats out against the Black Bears and scored 12 runs in each of the final two games of the series at Story Field on the Lower Columbia College campus in Longview.

Walla Walla ended the home portion of its 2019 schedule with a 4-2 homestand. Highlights included a come-from-behind victory over Ridgefield and a post-season clinching win over Kelowna. Bryce Vitt hit a three-run double and Emanuel Dean singled him in as the Sweets rallied from a three-run, ninth-inning deficit to top the Raptors, 8-7. Brayde Hirai, Ty Hueckman, Jake Dahle, and Sebby combined on a three-hitter in a 4-0 victory over the Falcons that helped Walla Walla punch its postseason ticket.

Caulfield ended the regular season as the league’s seventh-leading hitter (.328) and Cesar Lopez was the third most prolific producer of runs batted in (39). Craven was 1-2 with a 1.99 earned run average. He threw 40.2 innings, allowed 30 hits, 11 runs, nine earned, walked 15 and struck out 41. Teammates Hueckman and Landon Boeneke were part of a log jam for second in the WCL with five wins.

Corvallis, which finished both the first and second half of the WCL season atop the South Division, did so with identical 21-6 records. The Knights enter the postseason with the league’s top three hitters – Jake Holcroft (.368), Briley Knight (.357), and Brooks Lee (.342). Knight tied for second in the WCL with eight home runs and was second in the regular season with 42 RBI. Holcroft ranked fifth with 33 runs batted in.

Southpaw Tevita Gerber has enjoyed a stellar summer for the Knights. He leads the WCL in wins with seven and has a 7-1 record with a 2.20 earned run average. Right-handed pitchers David Watson and Jackson Arnsdorf, like Hueckman and Boeneke, were among a handful of hurlers that won five games this season. Watston was 5-1 with a 4.02 ERA and Arnsdorf finished with an identical record and a 1.70 ERA.