Sweets take game 1 from the AppleSox in a big win 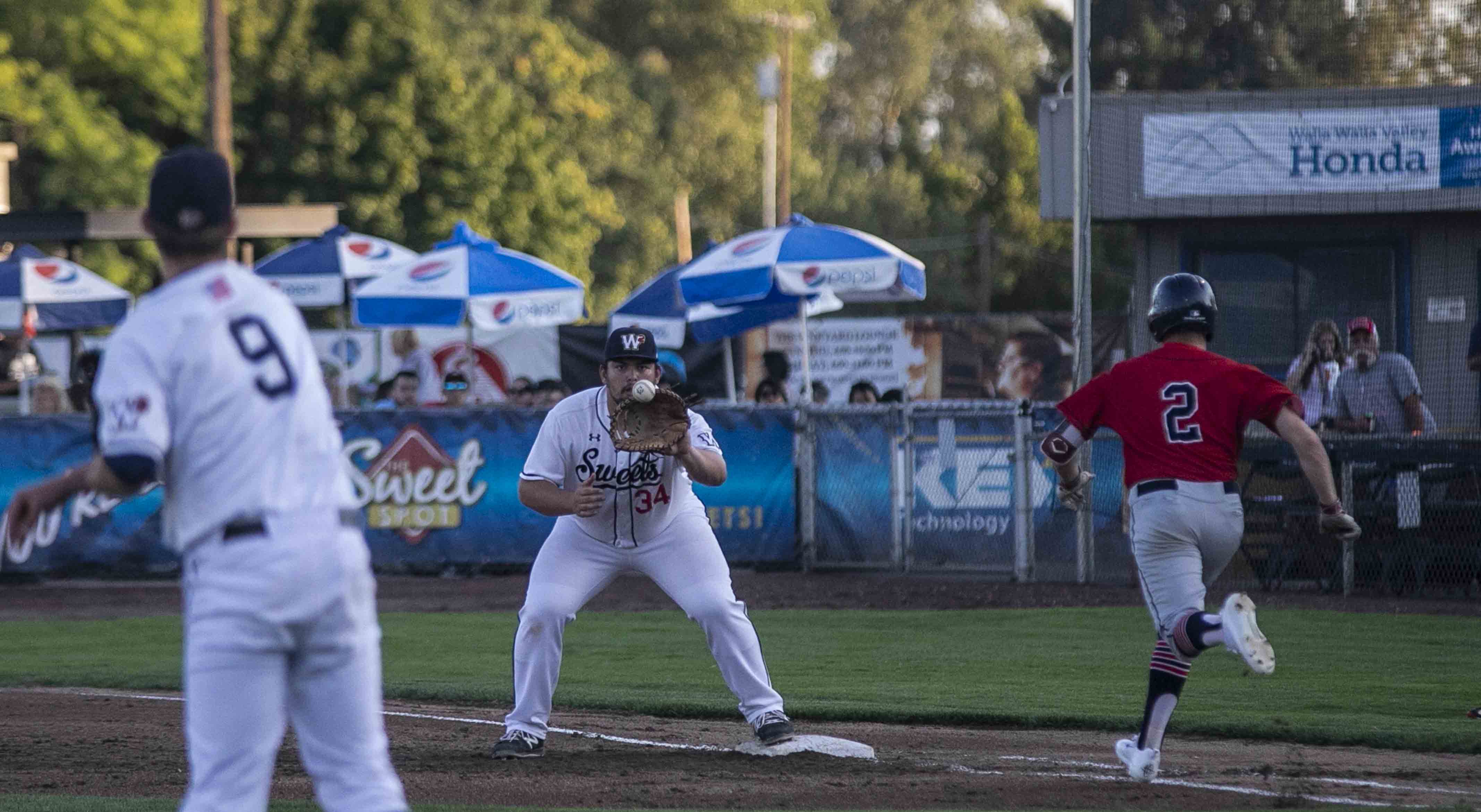 The Walla Walla Sweets scored four times in the seventh inning and once in the eighth Wednesday night, then stifled a ninth-inning rally by Wenatchee, and posted a 7-4 victory in the opening game of a three-game West Coast League baseball series at Borleske Stadium.

Walla Walla, which snapped a five-game losing streak, improved its WCL second-half record to 3-6 and its overall league mark to 21-15.

The Sweets, who were averaging just two runs a game during their five-game slide, scored a pair of two-out runs in the second inning. Parker Price reached base on the first of five Wenatchee errors in the game, and scored the game’s initial run when Carson Green divided the right-center field gap with a triple Green crossed the plate on a single up the middle by Connor Cirillo.

Wenatchee scored four times in the fourth inning and AppleSox starting pitching Ryan Long helped keep the visitors in the driver’s seat with a solid six-inning effort. Long retired 11 of the final 15 hitters he faced after yielding the Cirillo base knock in the second.

The AppleSox had a chance to break the game open in the seventh inning when they loaded the bases with two out. But Walla Walla reliever Nick Irwin snuffed out the threat by striking out Kody Darcy looking on a 2-2 pitch.

Walla Walla rallied against the Wenatchee bullpen in the home half of the seventh. Cameron Sommer hit Michael Petrie to begin the frame, Green got aboard on an error and Cirillo bounced out to the mound to advance the runners to second and third. Patrick Caulfield scored Petrie and moved Green up 90 feet with his third single of the contest. After pitcher Landon Schirer entered and Caulfield was thrown out trying to steal second base, Justin Folz walked, and Cesar Lopez singled in Green. Brock Ephan then worked the count full against Schirer before smashing a tie-breaking, two-RBI double to right that put the Sweets up 6-4.

“He tried to come after me with a fastball,” Ephan said. “I got a 3-2 fastball inside and was able to drive it.”

Irwin started the top of the eighth by fanning Brett Gillis and, after giving up a single to Connor Kiffer, struck out Kodie Kolden and retired Ryan Altenberger on a fly to center.

Price led off the Sweets eighth with a walk and scored on Wenatchee’s final snafu of the night.

The AppleSox Johnny Sage led off the ninth against Irwin with a soft single over the second-base bag and just out of the reach of Cirillo. Dalton Harum hit a deep fly to left that Green caught for the first out of the inning, and Blake Klassen produced a broken-bat hit through the left side of the infield. But Irwin displayed glacial calm the rest of the way and used that cool persona to strike out Hunter Montgomery swinging and Darcy looking to complete two-and-a third innings of tally-free relief.

“It was about locating the fastball and throwing the slider when they didn’t expect it,” said the 6-foot-1, 150-pound Irwin – lovingly known to his teammates as “Bones.” “I was able to hold down their offense so ours could take flight.” 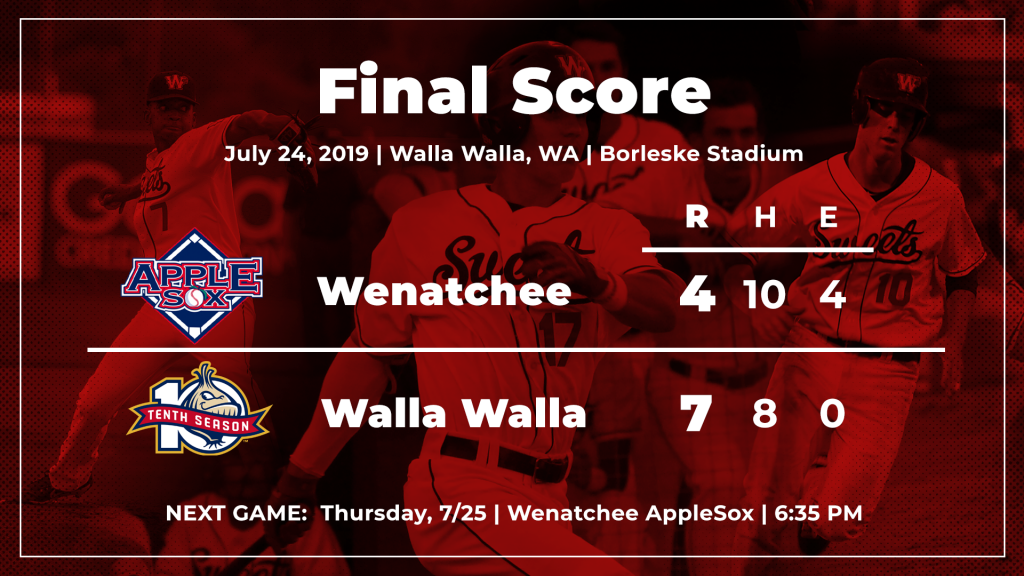 The middle game of the three-game series, to be highlighted by Bud Light Batting Practice and $1 Del Taco Tacos, is Thursday night at 6:35.