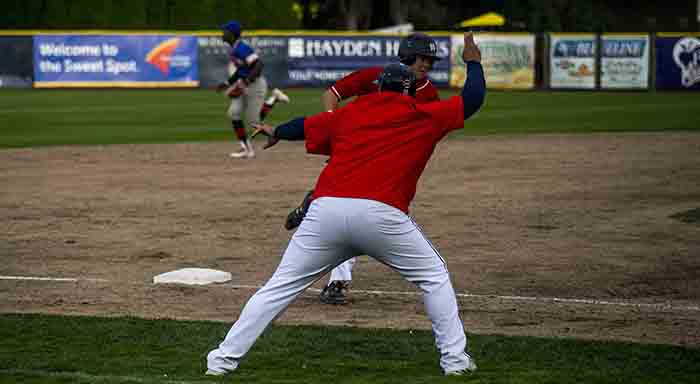 The West Coast League South Division-leading Walla Walla Sweets, after continuing to build on the best start in franchise history by finishing 4-2 on their most recent homestand against Portland and Port Angeles, begin a six-game road trip Tuesday when they open a three-game series at division rival Bend.

The second stop on the trip will come against another South foe – second-place Ridgefield – over the weekend.

Walla Walla dropped a 10-5 decision on Sunday to Port Angeles its last time out. That said, the Sweets won the previous two matchups against the Lefties by counts of 4-3 on Friday and 9-8 on Saturday. Cesar Lopez and Connor Cirillo had two hits apiece in the Friday win. Cirillo, Jordan Stubbings, and Emanuel Dean collected one run batted in apiece. Pitchers Chazz Martinez, Landon Boeneke, Ty Hueckman, Nick Irwin, and Reid Sebby managed to overcome a combined nine walks by striking out an equal number and allowing just four hits. Boeneke (2.1 innings pitched), Hueckman (2), and Sebby (1) did not allow a run. Justin Folz had three hits, Ben Fariss and Lopez added two each, and David Le Bioda contributed a two-run single in Saturday’s triumph. Martinez decided the issue with a 342-foot home run over the left field wall on the first pitch in the home half of the ninth inning.

The Sweets clinched their series with Portland on Thursday with a 9-6 final tally.  Patrick Caulfield had three hits and scored twice. Fariss and Cirillo had two hits apiece. Cirillo hit a game-tying, three-run home run in the second inning and Brock Ephan blasted a 421-foot bomb to left with one out in the sixth. Prior to dropping the middle game of the series to the Pickles, 8-7, on Wednesday, Walla Walla proved to be more sweet, dill, and kosher in the opening game of the set on Tuesday – a 3-2 victory. Caulfield accounted for all of the Sweets runs in the contest by way of a three-run homer in the fifth inning.

Bend enters the week fourth in the WCL South with a 6-9 record – six games behind the Sweets – and is coming off a 12-4 home loss to North Division-leading Bellingham on Sunday. Zach Needham is the team’s leading hitter with a .293 average. Chase Fernlund is close behind at .289. Justin Parsons is next at .273 and is third in the league in RBI (14).

The Sweets and Elks met at Borleske Stadium two weekends ago and Walla Walla produced a three-game sweep with 3-0, 9-6, and 16-11 victories. Caulfield connected for six hits in the series on his way to being named this season’s first WCL Player of the Week. Bryson Spagnuolo, Irwin, Charles Harrison, and Sebby teamed up to yield just four hits in the opener. Lopez, Folz, and Parker Price had three hits apiece in a wild series finale on June 9.

Ridgefield’s Raptors, 10-5, made their presence felt early in this 2019 campaign by fashioning a six-game winning streak and, like the Sweets, have two of the top seven hitters in the league entering play this week.  Michael Hicks (.386) is fifth and Jack Bauer (.378) is seventh. Grayson Sterling (.333) also finds himself above the .300 mark. Pitcher Carter Benbrook leads the WCL with a 0.75 ERA. Benbrook has allowed just eight hits, one earned run, two walks, and has K’d seven in 12 innings of work.

Tuesday, Wednesday, and Thursday games in Bend are scheduled for 6:35. Probable Sweets starters are Martinez, Craven, and Andrew Mosiello. The first two games in Ridgefield – on Friday and Saturday – are set for 6:35 and Sunday’s tilt is scheduled to begin at 3:05.