Caulfield sparks offense on a chilly night at Borleske 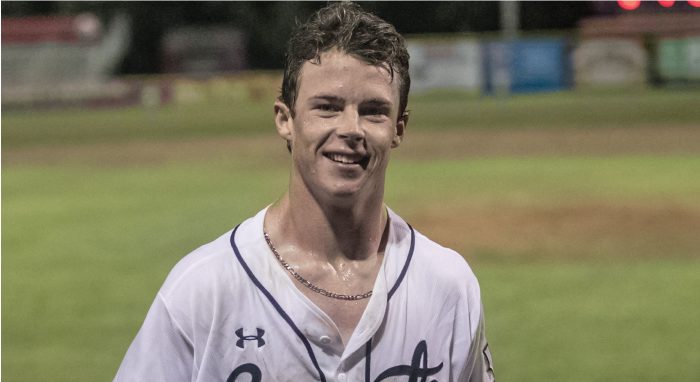 The Walla Walla Sweets improved their unblemished West Coast League-best record to 4-0 Friday night with a 3-0 victory over the Bend Elks at Borleske Stadium.

A quartet of Walla Walla pitchers – Bryson Spagnuolo, Nick Irwin, Charles Harrison, and Reid Sebby – combined on a four-hitter that was highlighted by 13 strikeouts.

Spagnuolo walked Nico Burgarello to lead off the game. Efry Cervantes followed with a 5-4 fielder’s choice and Bobby Peirce doubled him to third. But umpires ruled that Cervantes did not make contact with the second-base bag on his way to third and was called out as a result. Spagnuolo ended the inning by striking out Zach Needham on a called third.

Patrick Caulfield led off the home first by falling behind Bend starting pitcher Tyler Worrell 0-and-2. Two pitches later, Caulfield deposited a 1-2 Worrell delivery over the left-field wall to give the Sweets a 1-0 lead.

“He (Worrell) left a curveball up and I decided to put a ball in the air,” said Caulfield, who has 10 hits – nine of which are singles – in 17 at-bats this season. “It felt good to put something in the air. It felt really nice.”

Spagnuolo started the second inning by fanning Tanner Cantwell, but allowed a walk to Deron Johnson – who moved to second on a passed ball. But Spagnuolo retired Jake Jarvis and Chase Fernlund on grounders to second to get out of the frame.

Burgarello collected a one-out single in inning three and advanced as far as third, but Spagnuolo struck out Cervantes and got Peirce to fly out to right to wiggle off the hook. “We had a willingness not to give in,” Spagnuollo said. “I was not worrying about three outs,  just making our defense work.”

Nick Irwin replaced Spagnuolo in the fourth inning and extricated himself from a first-and-second mess by K’ing Jarvis and Fernlund to end the frame.

An easier time was had by Irwin in the fifth inning. He sat Justin Parsons down on a fly to right, Burgarello flew to left, and Cervantes struck out looking.

“I just tried to do my job,” Irwin said. “It turned out really well.”

Harrison punched out Peirce and Needham to start the sixth, but he hit Cantwell with a pitch and Johnson walked prior to Jarvis grounding out to first.

Caulfield singled with one out in the seventh inning. He stole second, his fifth theft of the season, then scored on a Cesar Lopez single to increase the Walla Walla lead to 2-0.

Harrison started a 1-2-3 eighth with back-to-back outs. Pinch-hitter Jorge Perez skied to center and Peirce went down swinging. Harrison hung a three-unassisted out on Cantwell after a walk to Needham.

“I controlled every pitch (fastball, curve, and change-up),” Harrison said. “I kept the hitters off balance. You have to make the best pitch you can every pitch.”

Walla Walla added additional insurance in the home eighth. Justin Folz led off with a double, swiped third, and scored on a Johnson throwing error.

Sebby pitched a scoreless ninth for the save. Johnson flied to left and Jarvis struck out. Nelson Padilla kept Bend alive with a double down the right-field line, but Sebby rallied from a 3-0 count to set Parsons down on strikes to end the game.

“The best thing I can do 3-and-0 is to try to take it pitch by pitch and take a breather,” Sebby said. “You can’t be all hyped up. I thought about coming back and beating him.”

“It was a team effort overall,” Irwin said. “Everybody had to plan. When something didn’t go right, we didn’t fall apart.”

The middle game of the three-game series – the annual Dog Days of Summer, presented by the Associated Veterinary Medical Center –  is tonight at 7:05.