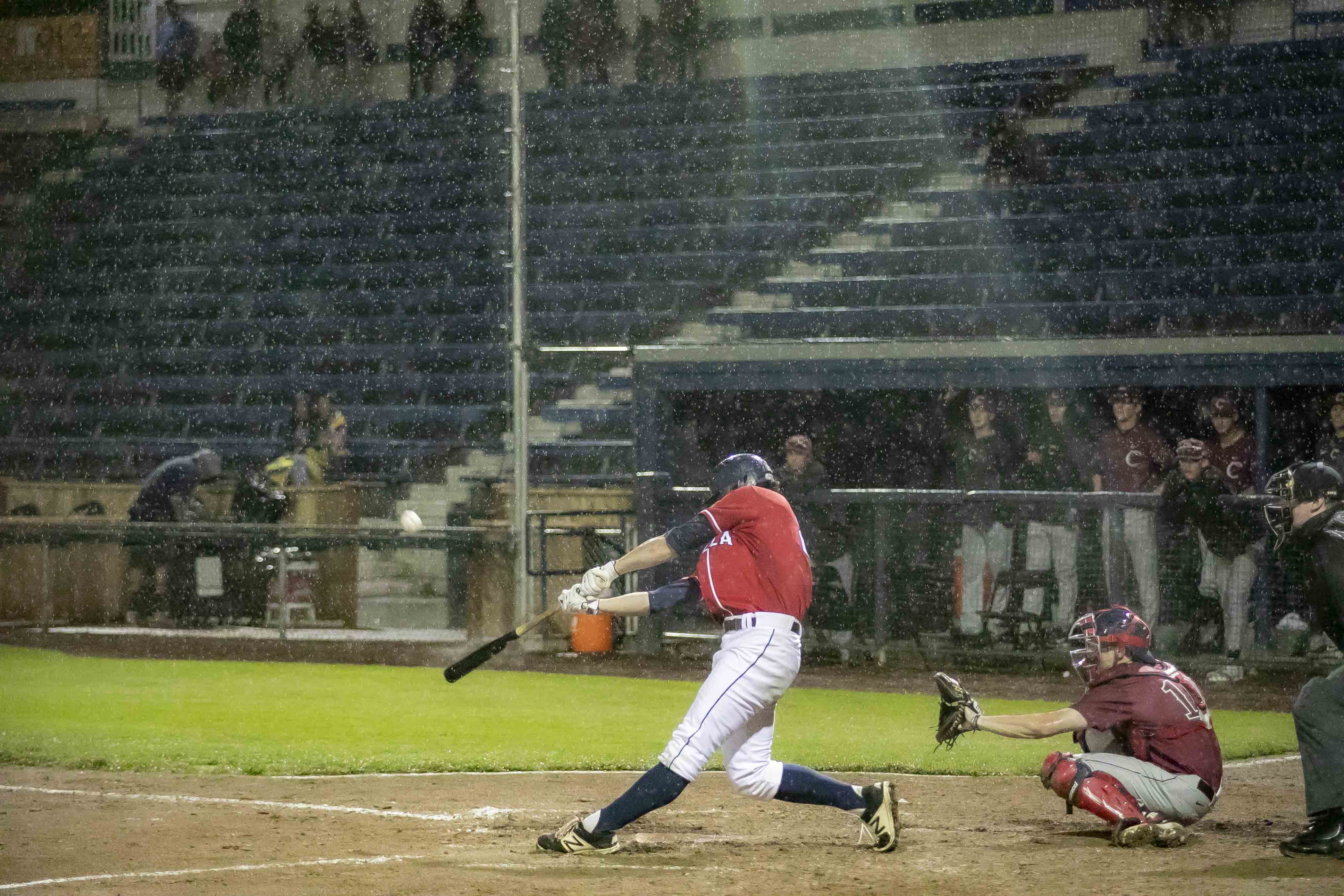 The Walla Walla Sweets successfully weathered a pair of lightning delays – one of 34 minutes and another of one hour, 26 minutes – and the visiting Corvallis Knights during West Coast League baseball action at dreary and drenched Borleske Stadium on Wednesday night.

Walla Walla guaranteed itself of no less than a series win over the three-time defending WCL champions after posting a 6-3 victory.

Center fielder Patrick Caulfield had four singles and two stolen bases in the game to lead the Sweets offensively. He singled in the first, third, fifth (and scored), and seventh innings.

Corvallis – which did not lead in Tuesday night’s encounter with the Sweets, an 8-2 Walla Walla triumph – used four first-inning hits to plate the game’s initial tally on Wednesday. Andy Atwood, Kai Murphy, and Briley Knight singled to start the frame. Atwood scored on a two-out base knock by Jake Holcroft.

The Sweets equalized in the fourth inning. Justin Folz reached on a one-out infield single and scooted to second on a throwing error by Knights’ starter Brodie Vassalakis. Folz stole third and produced the tying run on a Brandon Wagstaff sacrifice fly to right field.

Atwood led off the Corvallis fifth with a triple and scored on a Murphy sac fly that gave the lead back to the Knights, 2-1.

Walla Walla took the lead for keeps in the bottom of the fifth. Caulfield socked a one-out single then stole second. Cesar Lopez followed with a towering triple into the right-center field gap that knotted the score a 2-2, and scored the tiebreaking run when Parker Price reached base on a Knights’ error.

Wagstaff was hit by a pitch to start the home sixth. He stole second, moved to third on a Carson Green fly to right, and crossed the plate on a passed ball to give the Sweets a 4-2 lead.

Corvallis threatened in the seventh inning when it placed runners at second and third with no one out against reliever Ty Hueckman. But the Burns, Ore., native fanned Murphy and Knight, and retired Trace Tammaro 3-1 to escape unscathed.

The Knights closed within a run, 4-3, in the eighth inning against Hueckman prior to a two-run Walla Walla rally in the bottom of the inning. Caulfield plated the first run with a single.

Right-hander Dimick Wood came on in the ninth to close out the game and did just that. He allowed a one-out walk to Murphy, but struck out the side to notch the save.

The teams conclude their three-game series this morning with a “School’s Out for Summer/Hookie from Work Day” promotion. First pitch is scheduled for 10:35.