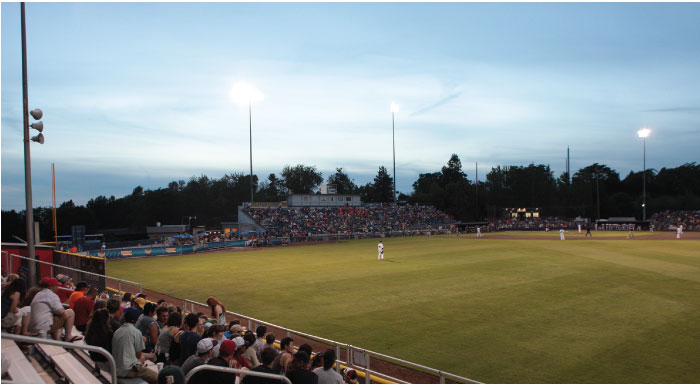 “Their first two pitchers were ex-pro players,” Walla Walla manager Frank Mutz said. “The second guy was throwing 92-95 miles per hour. That’s no excuse, but they were very high-level guys and we weren’t ready for it.”

The visitors tallied three times in the top half of the first inning against Sweets righthander Michael Peterson. Gavin Grant led off with a single and Kyle Strash walked. Landon Riker followed with a double off the left-field wall to plate Grant and advance Strash, who later scored on a wild pitch, to third. Ryan Budnick scored Riker with a sacrifice fly to center to complete the scoring.

Walla Walla threatened in its half of the first. But with runners at first and second and two out, Grant went into the air to snare a line drive off the bat of Carson Green.

Peterson settled down and retired the Studs in succession in the top of the second inning.

“Our pitchers were around the zone,” Mutz said. “Our guys went after batters. We shut ’em down six innings in a row (innings two through seven).”

Walla Walla got runners to second and third with two out in the fifth, but a called third strike ended any potential uprising.

The Sweets got just one more runner into scoring position the rest of the game.

Check out the game highlights here:

The FanFest served the benefit of getting the ballpark, staff and players up to speed in advance of Opening Day. Another highlight of the evening was KEPR TV sports anchor Alan Hoshida being named to the roster and starting in left field. Despite his great white shoes, and sparkling personality, he didn’t perform well enough to have the team extend his 1-day contract for the 2019 season.