Ryan Johnston headlines returning Sweets, and a power-hitting phenom from LC State is set to take aim at Borleske Blue 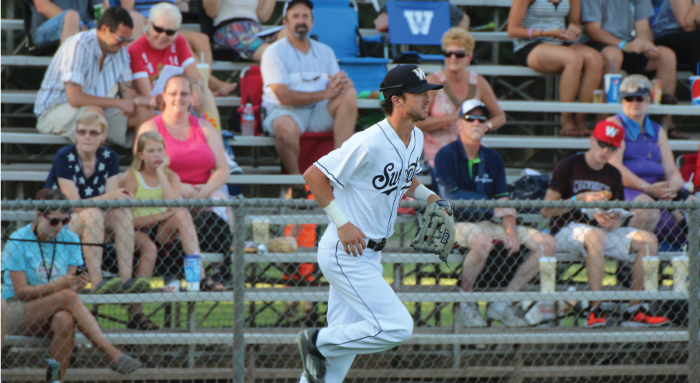 From the outside looking in, baseball offices in the West Coast League in March, April and May can seem quiet. With enough distance between the buzz of early-season signings and not yet reaching the electricity that takes over the cities in the circuit a week or two prior to Opening Day, it can seem like there isn’t much happening.

That is not the case. The days are filled with all sorts of work that is needed to make Opening Day – and the 31 games that follow – worth the experience to the paying fan. From the business of finalizing corporate sponsors and setting up groups, to sales of season tickets, to finalizing menus and retail designs, there is a steady, consistent effort to make sure that come Opening Day, teams deliver on the promise of great community baseball.

The baseball operations department is also busy at work. With front office members evaluating games and reports coming off of college fields, and coaches out meeting with players and coaches now that they are on the field, this is the time of year when the roster really starts to take shape. The early signings build the foundation while the signings in the spring create the character of the team. So – don’t misinterpret a six-week stretch between player signing announcements as lack of activity. In reality – it has served as a busier time than the previous three or four months that had been spent on player development.

The Sweets started the off-season with some names that had, at first glance, promised to provide significant power to the lineup. For the most part the anticipation is proving true. Jordan Stubbings is a player that Sweets fans will come to the ballpark every night to watch play. Through 5/15/19, the corner infielder has slugged 13 home runs, 16 doubles, and has an OPS of 1.095 through 54 games. Those numbers will translate well to a short left-field porch at Borleske Stadium.

Since the last press release announcing a player, on March 27, 2019, the Sweets have inked 19 players – a frenzied pace maintained by new general manager J.C. Biagi, who is working with manager Frank Mutz to craft a power-packed lineup that will look to overwhelm on both the offensive and defensive side of the ball.

One name that will be sure to get #SweetsCountry smiling is the return of Ryan Johnston from UC-Irvine. Johnston will be back for his fourth season in the shadow of the Blues, with a different role. He will be a veteran clubhouse leader, a solid bat when needed, a strike-thrower – Johnston is a two-way player – and will be like a coach on the field. With Johnston looking to go into coaching, it will be a good transition for the veteran Walla Walla man. Manager Frank Mutz is particularly excited to see #10 back in the dugout.

“He knows the game, knows how to handle to day-in and day-out nature of WCL baseball, and is as quality a person as he is baseball player,” said Mutz. “His experience – times where we’ve had success and times where we’ve failed the last three years – will allow him to be a true leader in making sure we succeed this season.”

Back to the power. Biagi has signed Brock Ephan, a first baseman/DH from LC State. Ephan is built like an offenisve lineman – he is 6’4”, 265 lbs. He clubbed 21 homeruns – seriously – and had a .732 slugging percentage in 2016 at Yavapai Junior College in Prescott, AZ, and won an NAIA World Series as part of the LC State Warriors in 2017. Besides the efforts to find a uniform to fit him, Biagi feels like he will be a difference maker, particularly in the early part of the season when most teams haven’t received their pitching depth.

A defensive and offesive “dude” – as they are called in the baseball world – is making his way to Walla Walla from Seattle, as Husky catcher Michael Petrie is set to follow the path of all-time great Willie MacIver. MacIver was a UW catcher, who went on to spend two seasons in Walla Walla before leading the Huskies to the College World Series and utimately the MLB draft.

Cesar Lopez – an outfielder found late in the off-season prior to the 2018 season – only became an All-Star last season, and was named the MVP of the WCL All-Star Game in Port Angeles. He will be returning, providing another talented and experienced bat to what is quickly becoming a stacked lineup from Mutz and assistant Larry Price.

Later, we will look at some of the arms that are on their way to Borleske. Trust that theme will be very similiar – power, veteran leadership, and a chip on the shoulder geared towards winning.