Take a break from the snow and read about sunny, baseball-like news throughout #SweetsCountry 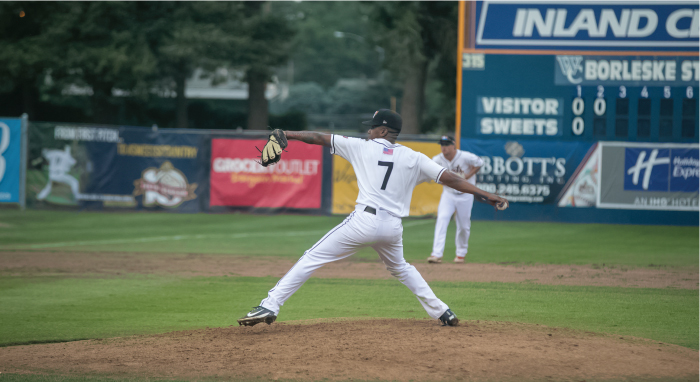 We move forward with this week’s first pitch:

1. Renae Martinez was an All-Star catcher for the Sweets in 2013, returned to anchor the battery in 2014, he became a beloved member of #SweetsCountry. After a non-traditional route through college, he landed as an All-Conference catcher as an Oklahoma Sooner. The Diamondbacks picked him up in the 33rd round last year, seeing what would come of the pick. He has taken the opportunity and – even as a catcher – has run with it. Check out his MiLB stats here, and be sure to keep an eye on where he lands. His family name is one of the favorites around the office.

2. Nick Nyquist is 2nd on the team for Gonzaga in homeruns this season. Cold weather has forced the ‘Zags to open forever on the road at 4-6, but they are still among the favorites to win a tough WCC.

3. Eric Yardley is looking more and more like a shot at starting the season on the roster in San Diego with Manny Machado and the Padres. His is 1-0 in 4 appearances this spring, with a 0.00 ERA and with opponents only hitting .143 against him. Yardley was a 2011 Sweet, and a native of the Tri-Cities.

4. Speaking of Yardley, he trains in Peoria, where a very lucky group of fans will be joining us to watch the Mariners (who share the Peoria complex with the Padres) train. What a way to escape the snow.  We leave on Sunday, March 10.

5. OF Patrick Caulfield is continuing his aggressive approach at the plate, as he leads the Santa Barbara College Vaqueros with a .348 batting average. A late-season pick-up, he electrified the Borleske faithful with a fearless approach to hitting and base-running.

6. It wouldn’t be a “10 Things” without a Darius Vines reference. Our 2018 Opening Day pitcher is delivering at Bakersfield, where he has struck out 26 batters faced while only walking 8.

7. Jordan Hovey has been a solid member of the Creighton lineup so far this season. The utility infielder is starting and batting .292 through their first 9 games.

8. We’re going north for a moment – where the ownership group of the well-run Victoria Harbourcats announced their intent to seek expansion in Nanaimo. A city of nearly 100,000 about 1 hour north of Victoria on Vancouver Island, it could end up being an intriguing option for travel to the island for WCL teams.

10. Yesterday, the Sweets launched sign-ups for our popular summer camps – the Skills Camp presented by the YMCA for kids 5-9, and the Prospect Camp for 8-12. We can’t wait to see you there!

11. We will throw a #11 in here – our thoughts turn to Whitman Baseball. They were supposed to open at home this weekend – but Borleske still has over 1′ of snow on the ground. Fingers crossed that in the next few weeks we can see the snow melt and Tim Duncan can work his magic so they can play soon. And congrats to Whitman’s men’s basketball team – who hosted the NCAA tournament this past weekend, and clinched another trip to the Sweet 16.