Ben Fariss is slated to return his power bat and arm to the Sweets in 2019 along side of newcomer Danny Cervantes from Central Arizona. 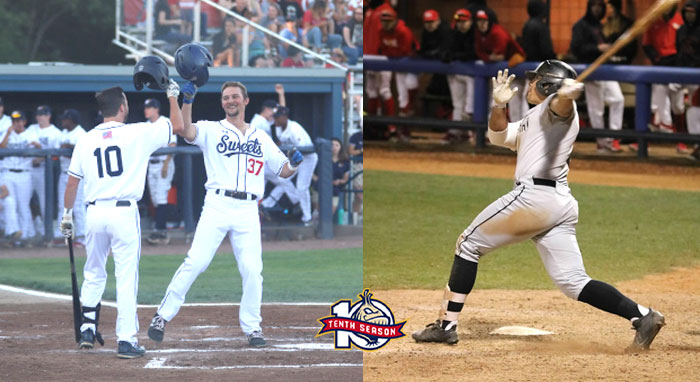 Danny Cervantes and Ben Fariss both enjoyed solid campaigns in their respective 2018 venues.

Cervantes hit .314, had an on-base percentage of .400, and slugged at a .568 clip last spring for a Vaqueros ball club that finished third in the Arizona Community College Athletic Conference. He scored 27 runs, and registered six doubles, eight home runs and 28 runs batted in in 42 games.

“I matured a lot,” Cervantes said. “I started off slow and had to see things from a different perspective. Once that clicked, I started having success.”

CACC finished 25-11 in league, 45-13 overall, and reached the Division I Region I tournament.

“My expectation for this spring is to win a national championship,” Cervantes said. “Our team is talented and we’ve worked hard to get to where we want to be.”

Cervantes said he couldn’t be more excited to play for the Sweets this summer.

“Ever since someone I’ve looked up to and worked with for years – Alex McKenna – played for the Sweets, I’ve wanted to play for them too,” Cervantes said. “Now I have that opportunity and can’t wait to play for a bunch of great fans.”

Fariss performed well for the Sweets last summer – both at the plate and on the mound. He hit .286 (22-for-77) with three dingers and nine runs driven across, and posted a .468 slugging percentage.

Fariss notched a 2-0 record and two saves in six pitching appearances. He struck out 10 and walked two in nine innings of duty.

“My 2018 season was an exciting ride,” Fariss said. “It was a great environment to play in with some great teammates and coaches. The support from the local fan base is the most incredible part.”