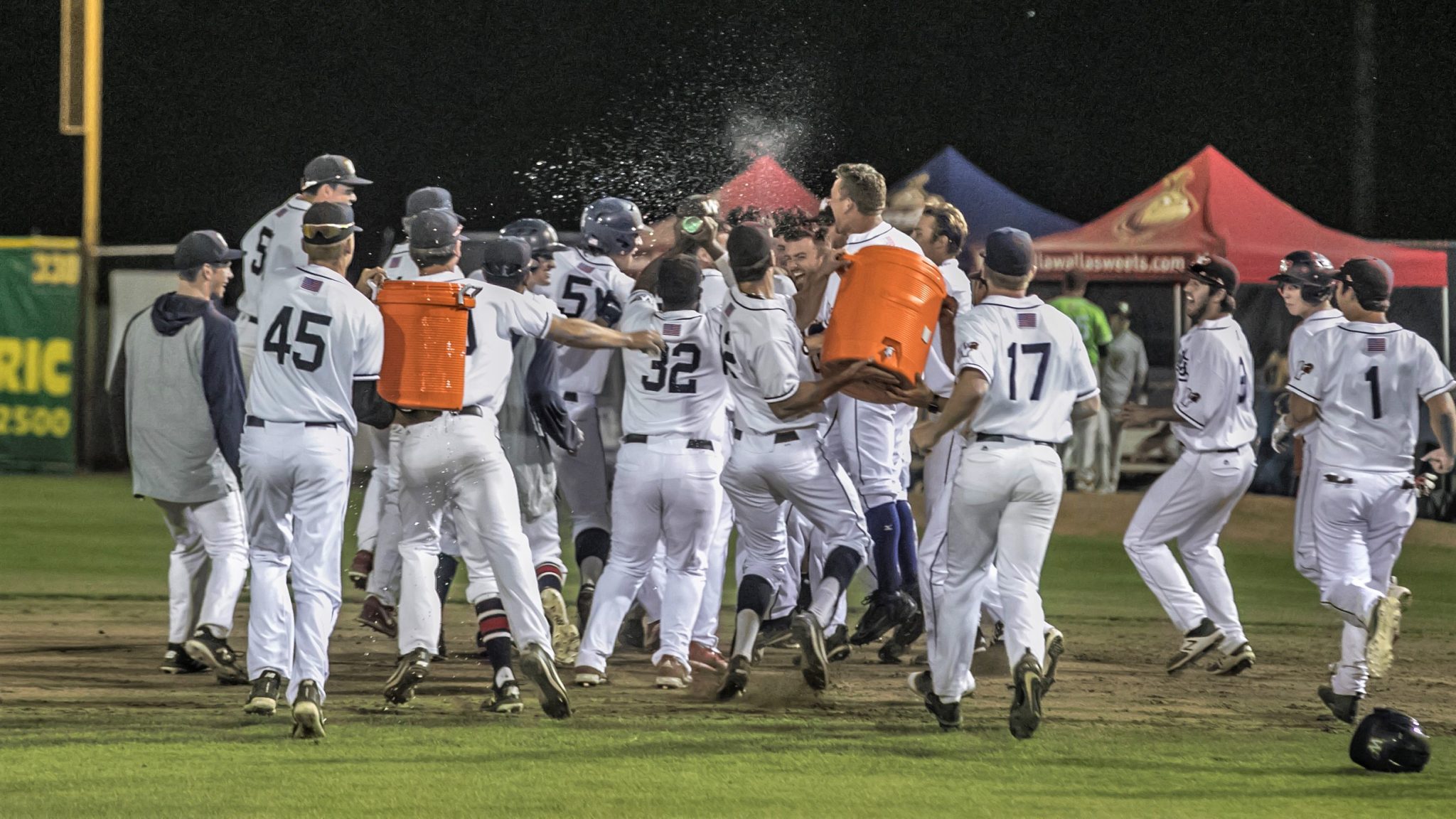 Walla Walla, Wash. – For the second time in three games, the Sweets walked-off winners. Walla Walla defeated the Yakima Valley Pippins by a final score of 4-3 at Borleske Stadium on Friday night thanks once again to some late game heroics.

Ben Fariss got the scoring started for the Sweets with another long ball to lead off the bottom of the second inning. He roped a homerun over the left field wall to make it 1-0 for what was his third homerun over the last three games.

The slim lead was short lived however as the Pippins answered in the top of the third off Sweets starter Bryce Moyle. A leadoff double was followed by an RBI single from Cody Jefferis to tie the game at 1-1.

Another big fly kept the offense rolling for the Sweets. Nick Nyquist led off the bottom of the fourth inning by hitting an absolute bomb to the deepest part of the yard out in centerfield.

The blast cleared the fence for a solo homerun to give Walla Walla the lead back at 2-1. Moyle finished what was yet another strong start going five innings with just the one run allowed and three strikeouts.

Luke Short took over on the mound for the Sweets in the top of the sixth inning. A single to lead off the frame was followed by back-to-back punchouts.

A wild pitch moved the runner over to second base with two outs. Cole Jones then flipped a single right back up the middle to drive home the run which tied the score at 2-2.

With Pippins starter Cullen Kafka still on the mound in the bottom of the seventh inning, the Sweets took advantage for another run. Ryan Johnston led off the inning by smoking a double up the left field line.

A groundout to the second baseman moved the runner over to third base with one out. The Pippins pulled their infield in as Matt Elser came to the plate.

He then lined a base hit over the head of the second baseman and into right field for an RBI single to score Johnston which made it 3-2. The lead proved to be short lived yet again as Yakima Valley looked to break the game wide open in the top of the eighth inning.

Back-to-back singles to start off the frame with Sweets reliever Will Blackburn on the mound put runners on first and second. Fariss then took over on the bump to try to keep the lead intact.

A bunt attempt to the next batter rolled right out in front of home plate. Newly entered catcher Josh Prizina picked up the ball and threw it to third base to try to cut down the lead runner.

Jordan Hovey at third caught the ball but missed putting his foot down on the bag which left everybody safe on a fielder’s choice. With the bases loaded and nobody out, Nick DiCarlo peppered a ball into right field for an RBI single which moved everybody up 90 feet and tied the game at 3-3.

Fariss then was able to bear down with the bases still loaded by punching out the next two batters he faced. With two outs, he got a groundout to Jack Filby at shortstop to end the inning which kept the score deadlocked in a tie.

That gave the Sweets a chance to rally late yet again, and they delivered in front of a great Borleske Stadium crowd. With Bryce Wooldridge on the mound for the Pippins in the bottom of the ninth, Fariss led off the frame by drilling a long single off the left-field scoreboard.

A sacrifice bunt moved the runner into scoring position at second base. A strikeout to the next batter made it two outs, and it looked like the game may extend into extra innings.

Back-to-back great at-bats by Prizina and Filby resulted in both hitters drawing two-out walks. It was then the scenario that every young kid playing the game of baseball dreams of: bases loaded, bottom of the ninth, two outs, tie game.

Patrick Caulfield strode to the batter’s box looking to take advantage of the late-game opportunity to be the hero, and he got the job done. On an 0-1 count, Caulfield lined a base hit into right-centerfield to score Fariss from third as the Sweets won on a walk-off 4-3 over the Pippins.

Just two games remain at home on the schedule for the Sweets as they look to win their fourth straight game on Saturday night against Yakima Valley. First pitch is slated for 6:35 PM.