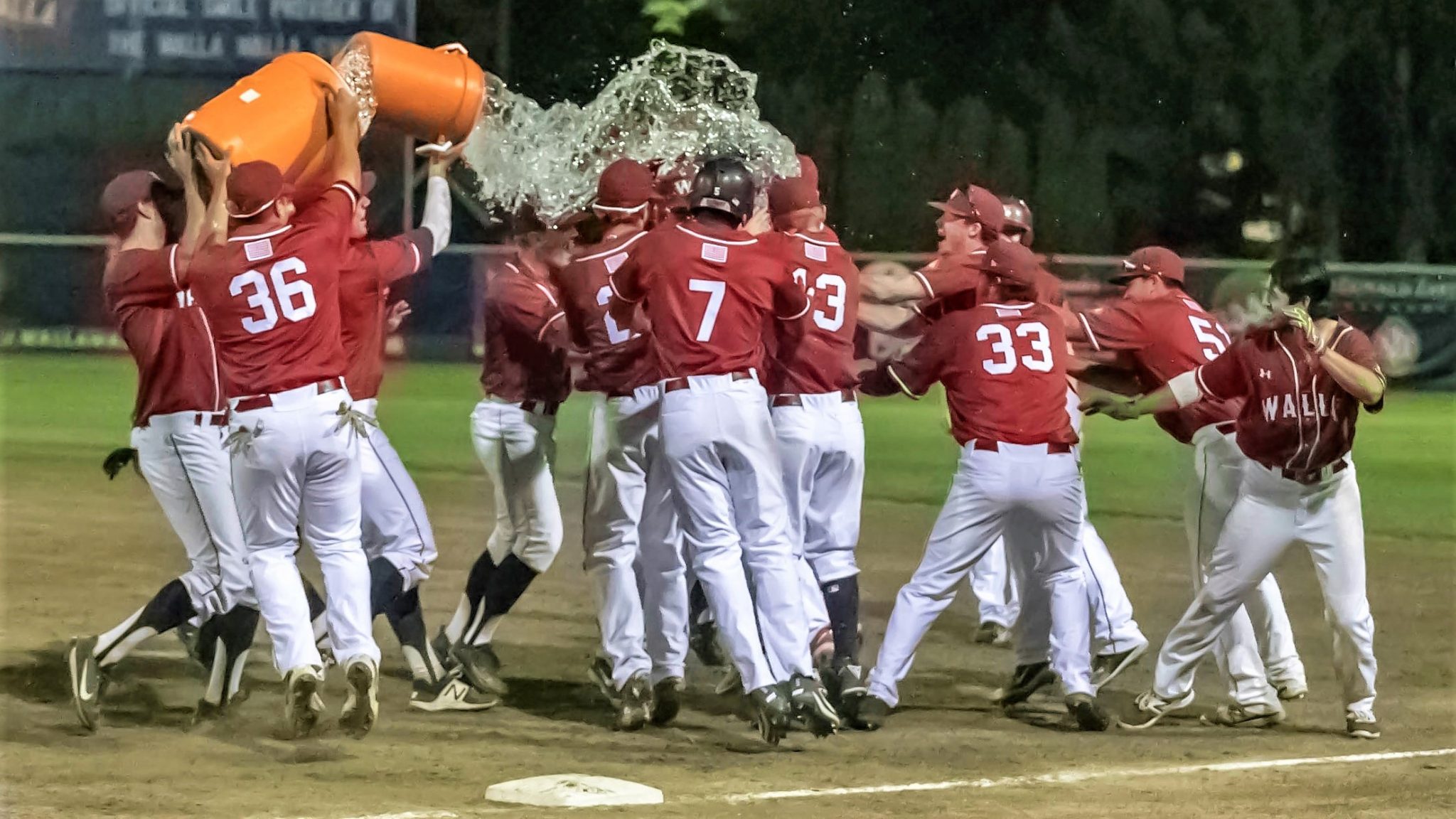 Walla Walla, Wash. – Few things in sports compare to the excitement of a walk-off victory. The Sweets experienced that first hand as they walked off winners against the Kelowna Falcons at Borleske Stadium on Wednesday night by a final score of 7-6.

It was a seesaw game early as the Sweets took the lead in the bottom of the first. With Falcons starter Stone Churby on the hill, a walk and a hit-by-pitch put two runners on with one out.

A passed ball moved both runners into scoring position at second and third. Jordan Hovey then laced a double into the left-centerfield gap to plate both runs which gave the Sweets a 2-0 lead.

A pop out to the next batter left a runner on second with two outs. Cesar Lopez then drilled a ball into left-centerfield for an RBI double to extend the lead out to 3-0 early.

The bats came alive for the Falcons in the top of the second inning with a massive two-out rally. After striking out the side in the first inning, Sweets starter Trent Sellers surrendered back-to-back singles to kick off the second.

A sacrifice bunt, a walk, and a strikeout loaded the bases with two outs. Tylor Nixon then lined a shot into left-centerfield which cleared the bases on a double as the Falcons tied it up at 3-3.

A single into right field to the next batter scored the runner from second as Kelowna took the lead 4-3. A single into left field then put runners on the corners with still two outs.

Back-to-back singles to the ninth and tenth batters of the frame pushed across two more runs to cap off the scoring in a huge second inning as the Falcons moved out in front 6-3. Walla Walla was able to answer back in the bottom of the third inning.

Danny Sinatro reached on an error by the second baseman to lead things off. Back-to-back singles then loaded the bases with nobody out.

Tate Soderstrom then lifted a deep fly ball into centerfield which resulted in an RBI sacrifice fly to make it 6-4. Samuel Reed tossed an impressive two and a third innings in relief for the Sweets without allowing a single baserunner.

It was then all Ryan Johnston the rest of the way for Walla Walla as he dazzled on the mound to keep the game close. He was sensational in tossing five scoreless innings while striking out five and only allowing one hit.

Perhaps most impressive, Johnston retired the final 13 batters he faced consecutively on nothing but strikeouts and groundouts, so the ball never left the infield. That effort kept the Sweets in a position to rally back late.

In the bottom of the eighth with Kellan Richards on the mound for Kelowna, a single and a hit-by-pitch put runners on first and second with nobody out. After a strikeout, Sinatro stole third base to put runners on the corners.

Johnston then came to the plate and hit a slow roller back to the mound. The throw went to first base which allowed the run to come across to score from third which trimmed the lead down to one at 6-5.

Cal Hehnke took over on the mound for Kelowna in the bottom of the ninth to try to rack up his second save in two games against the Sweets. Ben Fariss refused to allow that to happen as he was called on to pinch hit to lead off the inning.

On the very first pitch, Fariss blasted a towering drive over the left field wall for a solo homerun to tie the game at 6-6. The rally was on as Quentin LaFontaine drew a walk to put the game-winning run aboard.

Darius Vines came on to pinch run for LaFontaine to give the Sweets a little added speed. A bunt attempt to the next batter was hit right back to the mound.

Fortunately, the throw back to second base could not be pulled in by the shortstop as it was dropped for an error which allowed both runners to reach safely. After a sacrifice bunt was executed to move both runners into scoring position, the Falcons chose to intentionally walk Sinatro to load the bases with one out.

That brought up Nick Nyquist to try to be the hero, and he played the role perfectly. On a 1-1 count, he lifted a ball just deep enough into left field.

Vines tagged from third and headed home after the ball was caught. The throw in to home plate was wide as Vines scored standing up to give the Sweets the walk-off win on an RBI sacrifice fly from Nyquist by a final score of 7-6.

Walla Walla wraps up their three-game series against Kelowna on Thursday evening. First pitch is slated for 6:35 PM.