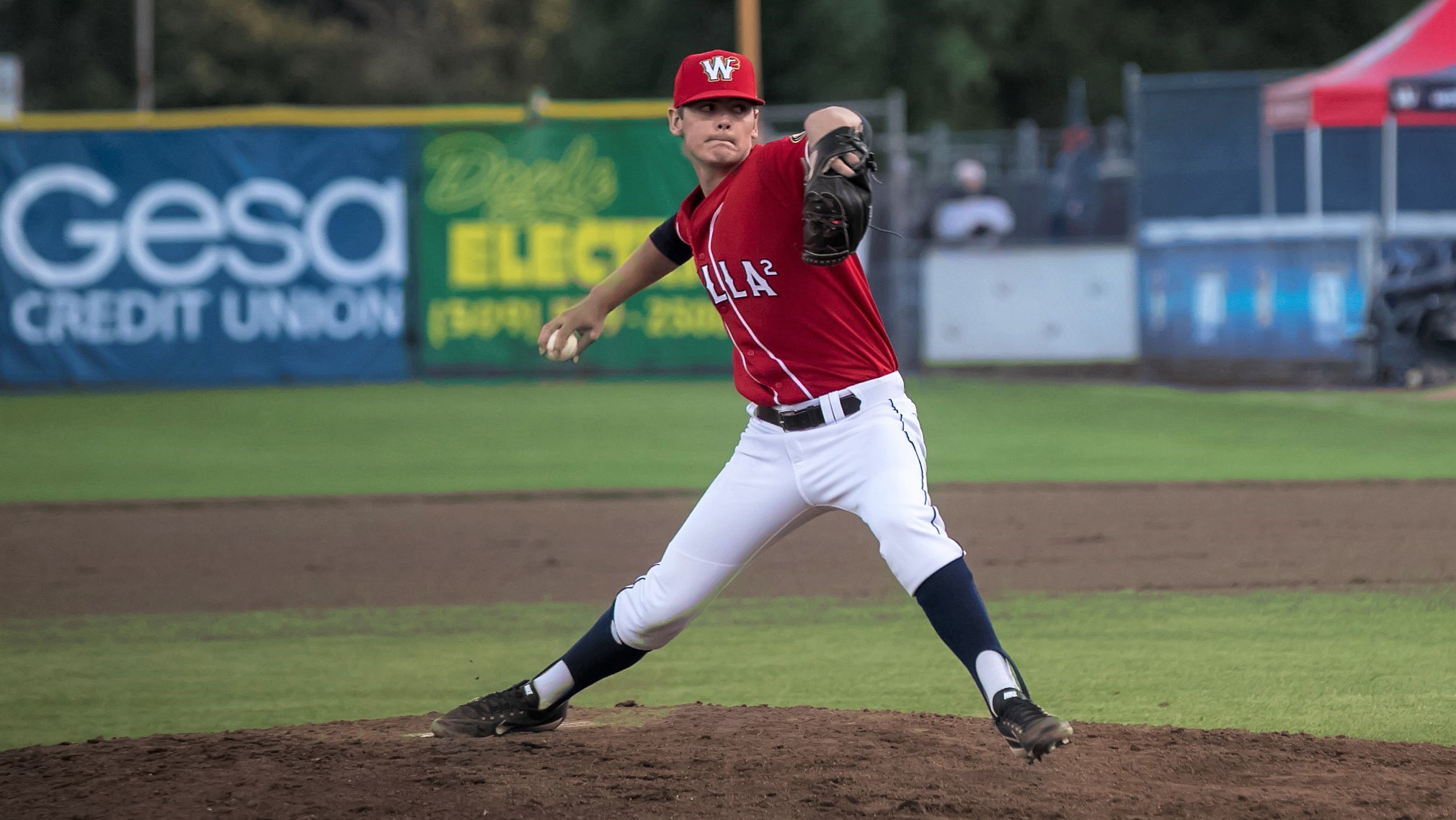 Walla Walla, Wash. – Pitching and defense was the theme of the game on Tuesday night. The Sweets lost a pitcher’s duel to the Kelowna Falcons by a final score of 3-2.

The Falcons came out swinging right away in the top of the first inning off Sweets starter Ty Hueckman. Back-to-back singles to the first two batters he faced put runners on first and second with nobody out.

The potential West Coast League MVP, Trent Tinglestad, then drilled a line shot out to the left field wall for an RBI double to make it 1-0. With two runners in scoring position and still nobody out, Lucas Soper lifted a ball just deep enough into left field to score the runner from third on a sacrifice fly to make it 2-0.

Hueckman was able to settle in after the rocky start. He tossed six straight shutout innings with just three hits allowed and two walks surrendered.

The offense finally woke up for Walla Walla in the bottom of the sixth inning with Falcons starter Andrew Alvarez still on the bump. Jack Filby led off the frame by singling right back up the middle.

A hit-by-pitch to Patrick Caulfield put runners on first and second with nobody out. Jordan Hovey then flied out deep into right field which allowed Filby to tag up and move over to third to put runners on the corners with one away.

On an 0-2 count, Nick Nyquist hit a slow roller to the shortstop. The throw went to second as the Falcons tried to turn the double play to get out of the inning.

Nyquist was able to hustle down the line though and beat out the throw to first which resulted in an RBI fielder’s choice to make it 2-1. The Sweets tied things up in the bottom of the seventh inning thanks to a fortunate throwing mistake.

Ryan Johnston drew a walk with one out in the frame. Alvarez then tried to snap a pickoff throw over to the first base bag.

He launched the throw over the head of the first baseman as it got out into the right field corner which allowed Johnston to move all the way over to third base. Danny Sinatro then dropped down a squeeze bunt attempt.

Johnston crossed home plate safely with the head start from third as that tied the game at 2-2. The tie was short lived however as the Falcons took the lead right back in the top of the eighth.

With Hueckman still battling out on the mound, a single with one out gave Kelowna a runner on. A fielder’s choice groundout then put a runner on first with two outs.

After a stolen base moved the runner into scoring position, Taylor Wright hammered a ball deep into the right field corner. It banged up off the wall for an RBI double as the Falcons moved back out in front 3-2.

Hueckman was able to finish off the inning thanks to a spectacular defensive effort. With a runner on second and two away, a sinking fly ball was hit into shallow centerfield.

Sinatro utilized his tremendous speed to cover a lot of ground and got within range. He then laid out to make the diving catch which saved another run from scoring in the inning to keep Walla Walla close.

That wound up being the last bit of excitement that Sweets fans would get to see on the night though. James Brooks and Cal Hehnke worked back-to-back shutout innings in the eighth and ninth to seal the victory for the Falcons in game one by a final score of 3-2.

The Sweets try to bounce back and even the series in game two on Wednesday evening. First pitch is scheduled for 6:35 PM.