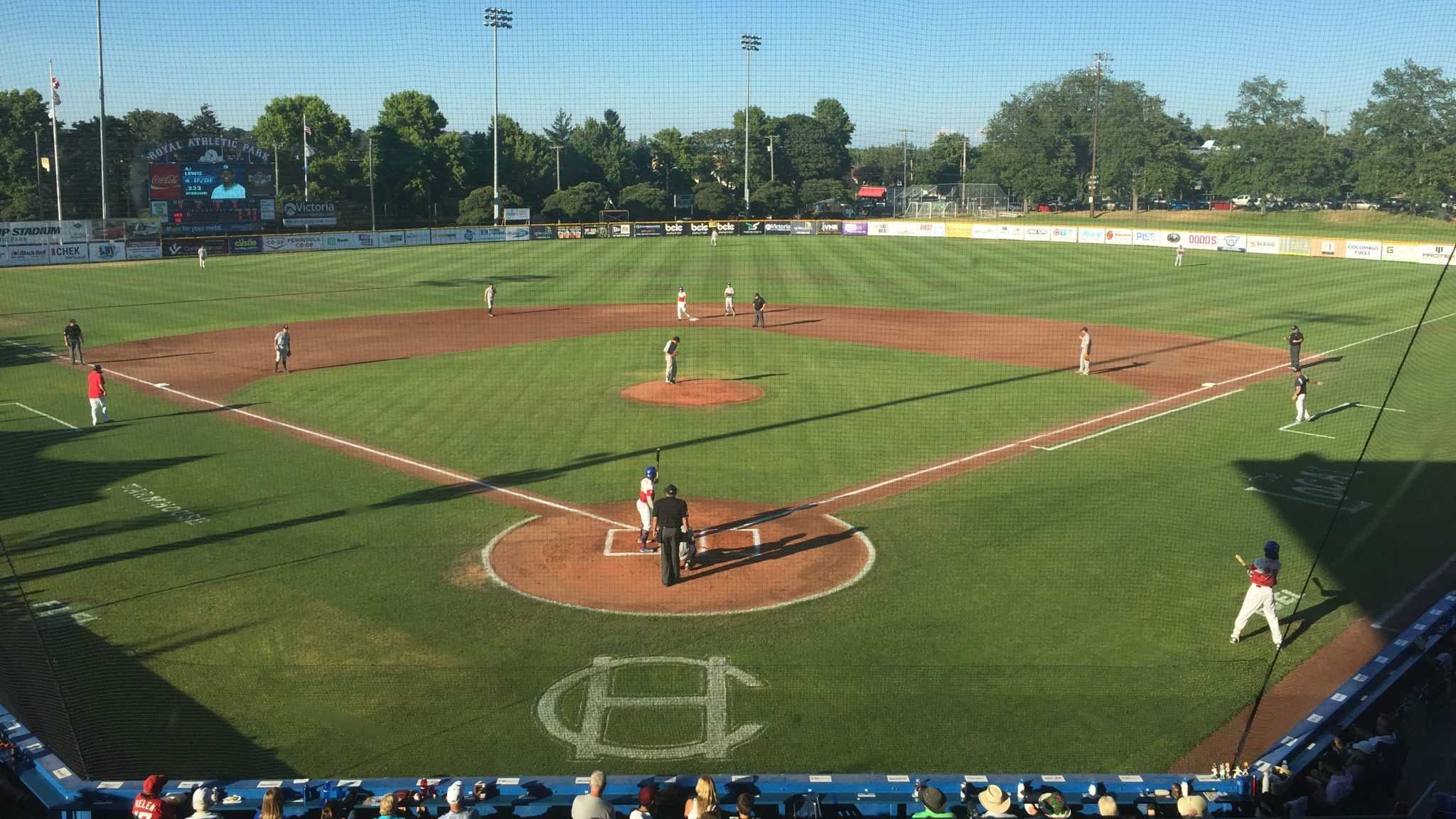 Victoria, B.C. – For just the second time this season, the brooms came out against the Sweets. The Victoria HarbourCats sealed the series sweep against Walla Walla with a 6-4 victory at Royal Athletic Park on Thursday night.

The Cats jumped out to an early lead off Sweets starter Haydn King. In the bottom of the first, a double and a groundout put a runner on third with one away.

Nick Plaia then singled into right field to plate the run to make it 1-0. The next batter lined a base hit into left field.

Cesar Lopez came on to field the ball, but it skipped under his glove. With the ball rolling past Lopez, the runner from first came all the way around to score on a single and an error to make it 2-0 right away.

The lead was extended for Victoria in the bottom of the second inning. A walk and a single to lead off the inning put runners on first and second with nobody out.

An unassisted groundout to Nick Nyquist at first base moved both runners up 90 feet with one away. Rowdy Jordan then roped a ball up the third base line to drive home both runs on a two-RBI single to make it 4-0.

King was able to settle in and keep the score put as he finished his outing tossing six innings with seven hits and the four runs allowed. The Sweets finally put together some offense in the top of the seventh to trim the lead down and put them back in the game.

With one out, Ryan Johnston drilled a shot over the left field wall for a solo homerun to make it 4-1. After a lineout, Walla Walla sparked a two-out rally.

Jack Filby ripped a single through the right side of the infield to kick things off. Josh Prizina then hit a shot down the left field line that got all the way out into the corner.

Filby came all the way around to score from first base on the hit, and the throw back in from left field to home plate went out of play near the Cats first base dugout. That allowed Prizina to be waved around to score on the play as well on an RBI double and an error to cut the lead down to one at 4-3.

Victoria responded right away though to extend their lead back out in the bottom of the seventh. With Michael Peterson on the mound for the Sweets, a single with one out brought Jordan to the plate for the Cats.

He then promptly blasted a ball into the right-centerfield gap that cleared the wall for a two-run homerun to push the lead right back out to 6-3 for Victoria. Johnston then took to the mound for the Sweets and got out of the inning in addition to tossing a scoreless eighth to keep the score put which gave Walla Walla a chance.

They were able to put together a late-game rally in the top of the ninth. Tate Soderstrom led off the inning with a single and was then pinch run for by Darius Vines.

A walk to Filby put runners on first and second with nobody out. Prizina then hammered a ball into the left-centerfield gap that just missed leaving the yard by a few feet.

It wound up being caught on the warning track for the first out of the inning with Vines tagging from second and moving up to third to put runners on the corners. Tyler Pritchard then lifted a ball just deep enough into centerfield to score Vines from third on a sacrifice fly to make it 6-4.

That was where the score stood though as the next batter struck out to end the game to give Victoria the win by a final score of 6-4 and ultimately wrapped up the sweep for the HarbourCats.

The Sweets now go port-to-port as they head to Port Angeles to open up a three-game series against the Lefties. First pitch of game one on Friday night is slated for 6:35 PM.