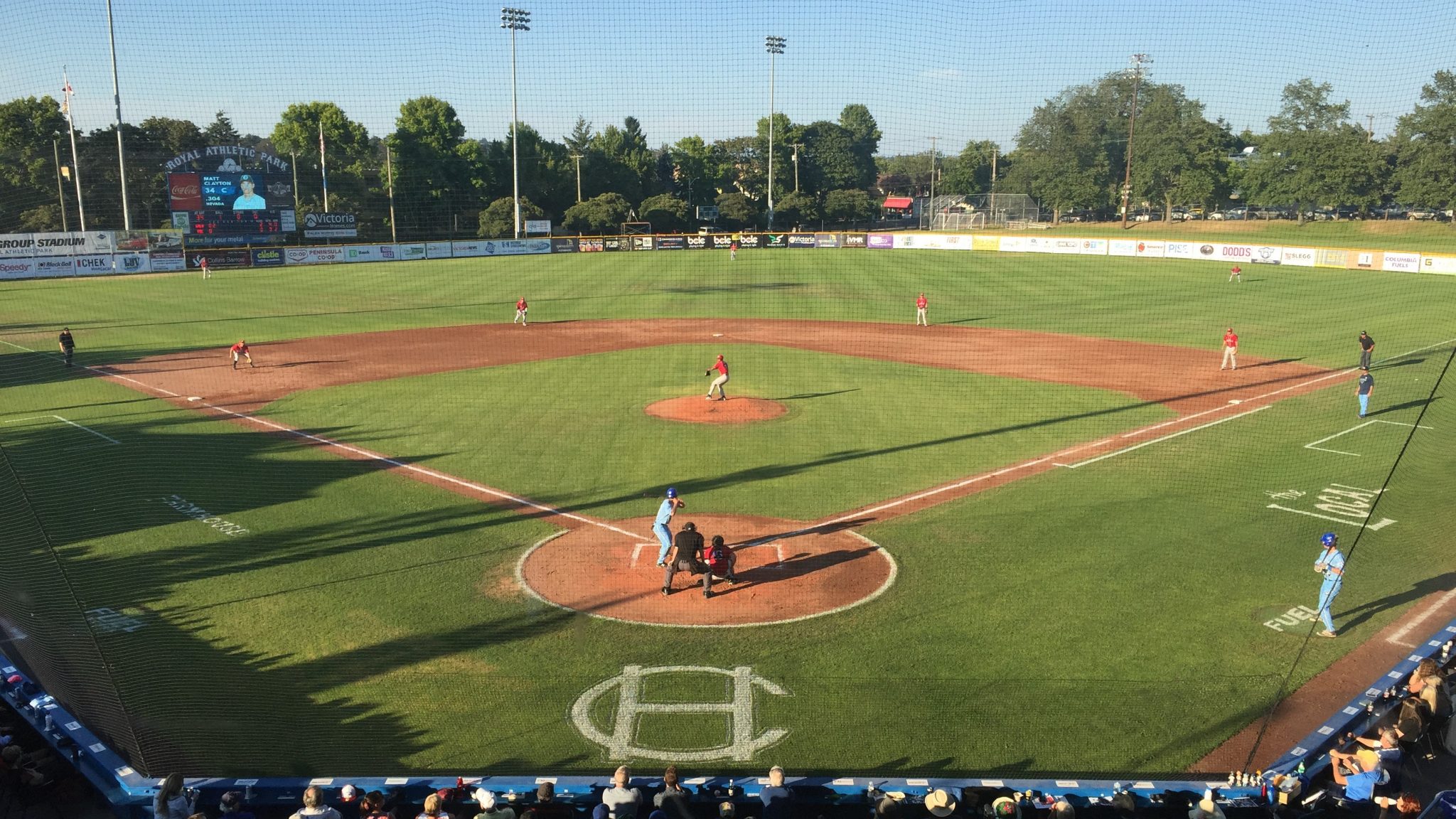 Victoria, B.C. – A hard fought game for Walla Walla went the other way with one swing of the bat late. The Victoria HarbourCats defeated the Sweets by a final score of 4-3 at Royal Athletic Park on Wednesday night.

The Sweets jumped out to an early lead in the top of the second inning off Cats starter Mason Shaw. Jordan Hovey got the frame started with a leadoff walk.

A Ryan Johnston single put runners on first and second with nobody out. Ben Fariss then lined a ball into the right field for a single.

The throw back in from the right fielder glanced off the glove of Victoria’s catcher and got away. That allowed Hovey to come across to score to make it 1-0.

Johnston wound up being cut down at third base on the play which put a runner on second with one out. Matt Elser then singled back up the middle which moved Fariss up 90 feet and put runners on the corners.

A pop out made it two outs in the inning, then Danny Sinatro ripped a hard groundball to the right side of the infield. The second baseman could not reel the ball in which left everybody safe with a run coming across to score on what was ruled an RBI single to make it 2-0.

Victoria answered back with a run of their own in the bottom of the second inning. With Sweets ace Darius Vines on the mound, three straight singles to start the frame pushed across a run to make it 2-1.

The Cats added on in the bottom of the third inning to take the lead. A flyout to lead off the frame was followed by back-to-back walks to put runners on first and second with one away.

After a strikeout, Matt Clayton lifted a ball down the right field line. Cesar Lopez ranged over and laid out to try to make the grab, but the ball eluded his grasp.

Two runs came across to score on the play as Victoria moved out in front 3-2. The lead was short lived however as the Sweets swung right back in the top of the fourth.

Elser doubled deep into centerfield with one out in the inning to give Walla Walla a runner in scoring position. Tyler Pritchard then flared a ball into right field for an RBI single which tied things up at 3-3.

Ty Hueckman then took over with one out in the bottom of the seventh with the game still tied at 3-3. After a groundout to the first batter he faced, Harrison Spohn came up and hammered a shot deep up the left field line.

The ball hugged the foul pole in fair territory for a solo homerun which gave the HarbourCats a lead that they did not relinquish at 4-3. The Sweets tried to rally late but could not muster any offense off Victoria reliever Aidan Goicovich.

He worked back-to-back shutout frames in the eighth and ninth inning to earn the save and seal the victory for the HarbourCats by a final score of 4-3.

The Sweets have one last crack at trying to salvage the series as they will take on Victoria in the series finale on Thursday. First pitch is slated for 6:35 PM.