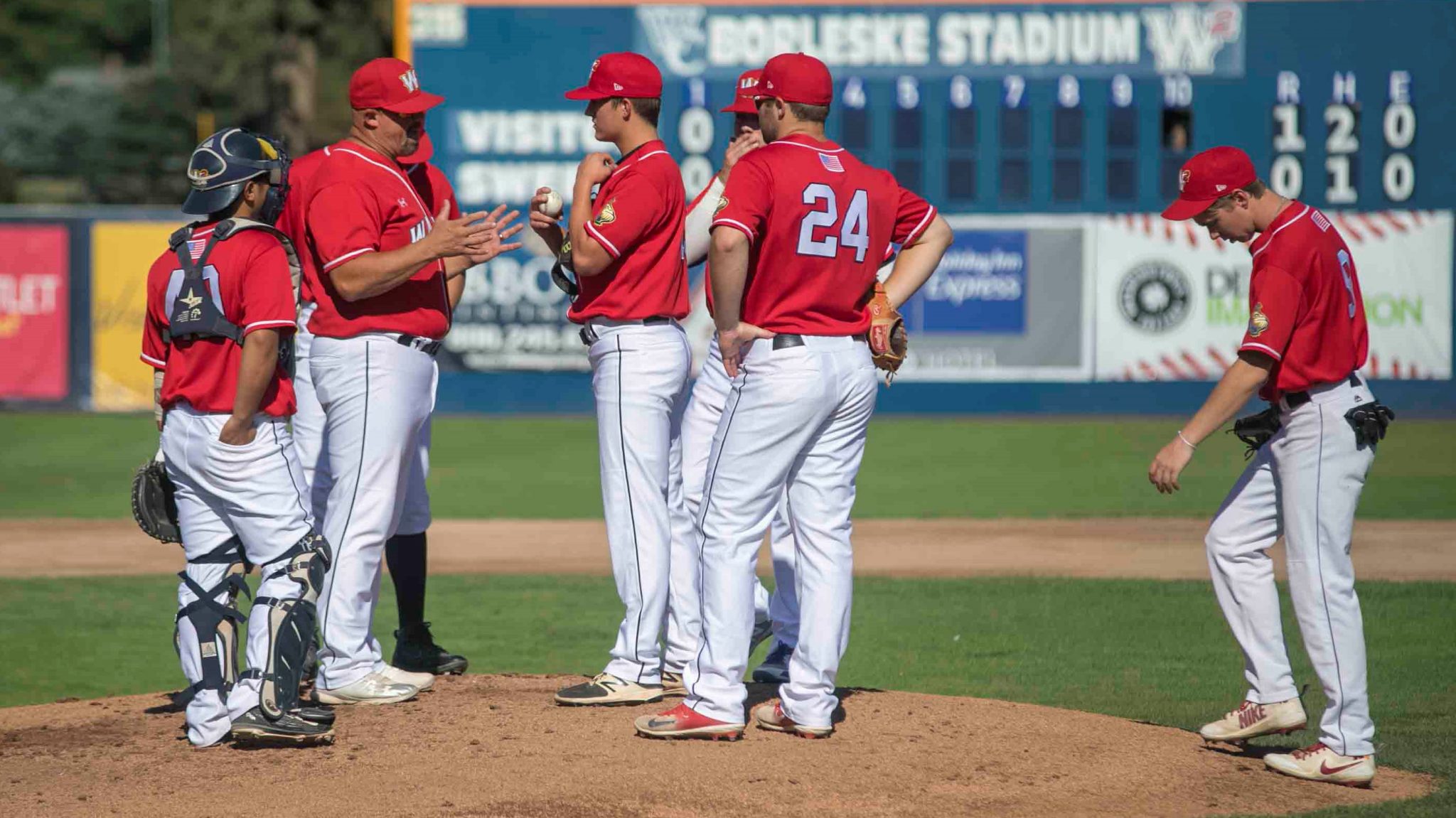 Walla Walla, Wash. – After back-to-back great performances, the wheels came off for the Sweets on Sunday afternoon. The Cowlitz Black Bears defeated Walla Walla by a final score of 10-3 at Borleske Stadium.

Cowlitz struck first off Sweets starter Trent Sellers, who is the latest new addition to the team. A leadoff double was followed by a pair of groundouts which pushed across a run to make it 1-0.

Walla Walla tied things up in the bottom of the second inning. With the bases loaded and one out, Willy Chang dropped down a safety squeeze bunt.

Jordan Hovey sprinted home and slid in safely to tie the game at 1-1. On the play though, Sweets manager Frank Mutz waved Matt Whitney around third to try to score him from second base. Whitney ended up sliding in just a bit late and was cut down at the plate to end the inning.

The back-and-forth game continued in the third inning as the Black Bears struck for a pair to kick off the top of the frame. They got back-to-back homeruns from Ryan Kim and Austin Bell to get the lead right back at 3-1.

Ryan Johnston then took over on the mound after a flyout and a double. With a runner on second and one away, Johnston worked back-to-back groundouts to end the inning and limited the damage.

The Sweets answered right back in the bottom of the third. Tyler Pritchard led off the inning with a single and was then bunted over to second base by Patrick Caulfield.

A Danny Sinatro infield single on a bunt attempt put runners on first and third with only one out. Nick Nyquist then flared a fly ball down the right field line.

The right fielder was unable to field the ball on the fly as it dropped in for a single which plated Pritchard to make it 3-2. With runners on first and second, Cesar Lopez ripped a single through the right side of the infield to score Sinatro which tied the game at 3-3.

It was all Cowlitz for the rest of the way as that wound up as all the offense that the Sweets could muster. The sixth inning proved to be fruitful for the Black Bears as they doubled their run total.

A walk, a single and a sacrifice bunt to lead off the inning put runners on second and third with one away. Then Samuel Reed took over for Johnston on the mound to try to wiggle out of it.

Unfortunately, the first batter he faced drilled a single into right field to score the runner from third to make it 4-3. Tony Boetto then hammered a shot into right-centerfield that one-hopped the wall which resulted in an RBI triple as the lead moved out to two at 5-3.

The next batter singled through the left side of the infield to plate Boetto from third which capped off the three-run inning as the Black Bears led 6-3. Cowlitz tacked on another run in the top of the seventh off Sweets reliever Patrick Collins.

With one out and the bases empty, Blake Burton hit a wall-scraper homerun to left field for a solo shot to make it 7-3. Things continued to unravel for Walla Walla in the top of the eighth inning.

A hit-by-pitch, a stolen base, and back-to-back strikeouts put a runner on second with two outs. Then a bunt attempt was fielded by Collins out in front of home plate.

The throw to first base was just a bit too far inside the bag as Nyquist could not field it. The ball got into the right field corner which pushed across the runner from second on the throwing error with the batter winding up at second as the lead extended to 8-3.

Ryan Kim then flipped a single into right field to score yet another run which moved the Black Bears out in front by six at 9-3. Carson Woolery took over in the top of the ninth to try to keep the score put but was unable to do so.

Back-to-back walks to start the inning was followed by a fielder’s choice to put runners on the corners with one out. Jonathan Hodo then singled into left field to score the runner from third to make it 10-3.

The Sweets were unable to push across any runs in the bottom of the ninth as the score stayed right where it was. The Cowlitz Black Bears ultimately took game two by the final score of 10-3.

Walla Walla will host Cowlitz for the final game of their three-game series in a rubber match on Monday. First pitch is slated for 6:35 PM.