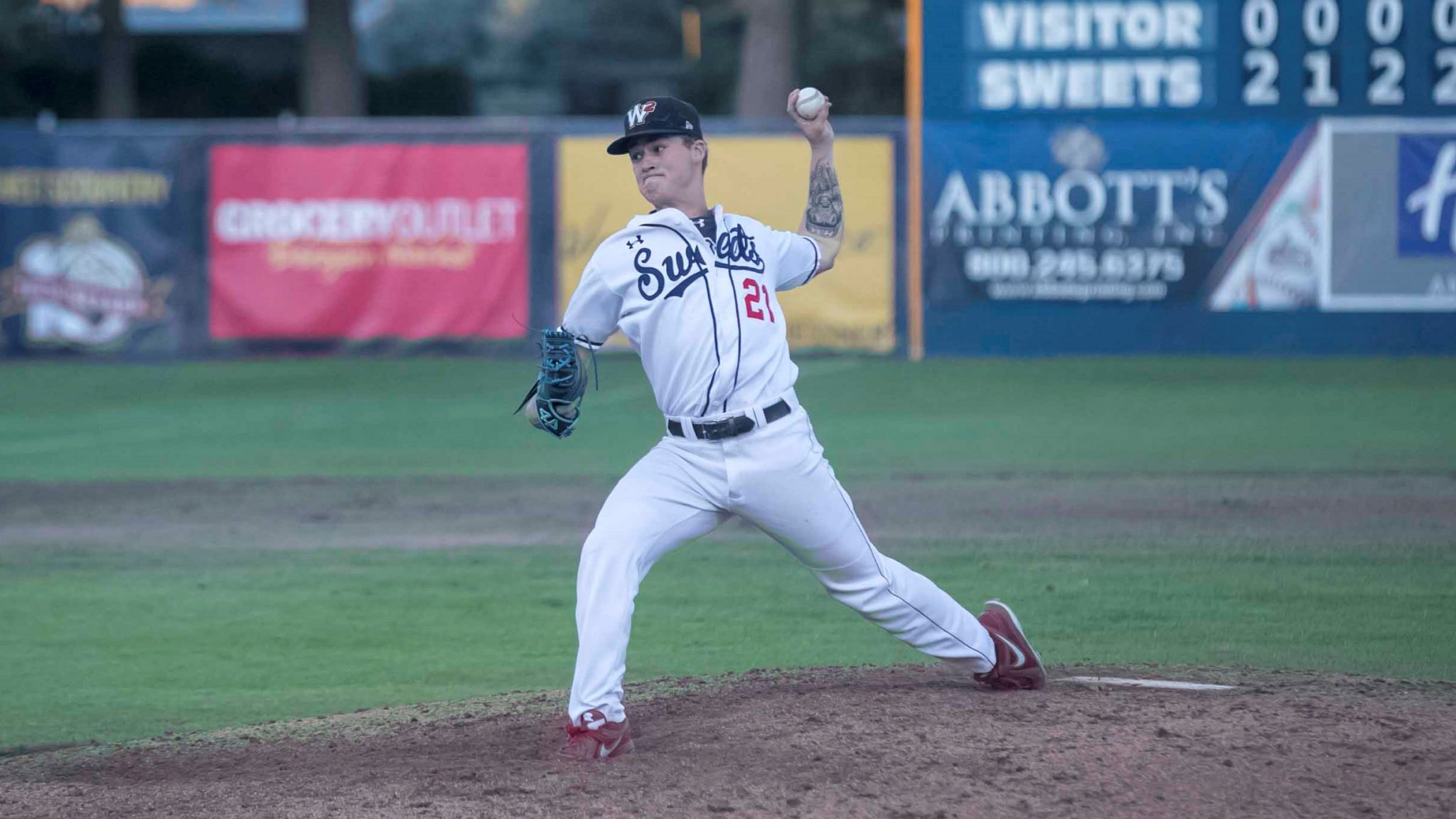 It did not take long for the Sweets’ new arrivals to feel right at home as Patrick Caulfield and Matt Whitney got things started offensively in the bottom of the first. Caulfield led off by smashing a triple deep into the right centerfield gap.

On the very next pitch, Whitney drilled a shot into left centerfield for an RBI double to give the Sweets a 1-0 lead. With Whitney on third after a wild pitch and a groundout, Ben Fariss lifted a ball deep into centerfield that was flagged down for an RBI sacrifice fly which extended the lead out to 2-0.

Matt Elser led off the bottom of the second inning by hitting a high pop up into shallow left field. The Black Bears shortstop was parked underneath it but missed the ball completely which resulted in a double.

A groundout to the first baseman moved Elser over to third with one out. Then Caulfield peppered a ground ball to the shortstop which drove home the run as the Sweets moved out in front 3-0.

The offense kept on rolling in the bottom of the third after Ryan Johnston drew a walk with one out and then advanced to second on a balk by Cowlitz starter Matt Gannon. After a flyout, a wild pitch moved Johnston over to third with two away.

Then Jack Filby drew a walk to put runners on the corners with two outs. After a steal by Filby put runners on second and third, Elser smoked a shot into the left-centerfield gap for a two-RBI double as both runs came across to score and the lead swelled to 5-0.

The bottom of the fourth was then led off by a single from Caulfield. Whitney then doubled again but this time up the left field line.

The relay throw in was sent to the plate as Caulfield was waved around third, but he was cut down at the dish with Whitney winding up at third base on the play. Then Nick Nyquist came up and hammered a ball over the left-centerfield wall for a two-run homerun as the lead grew to 7-0.

Bryce Moyle got the start for Walla Walla and was exceptional throughout his outing. He finished the day tossing six shutout innings while allowing just three hits and striking out 11, including striking out the side in both the fifth and sixth innings.

In the bottom of the sixth, the Sweets tacked on their final two runs of the game. Caulfield led off with a single and wound up at second after a stolen base.

Then Whitney singled into centerfield to plate the runner from second and pushed the lead out to 8-0. After Nyquist reached on a fielder’s choice, a flyout kept him on first with two outs.

A Danny Sinatro walk put runners on first and second with two away. Then Tate Soderstrom drilled a single through the right side of the infield to plate Nyquist and make it 9-0.

Michael Peterson finished off the game on the mound for Walla Walla and was just as sharp as Moyle. Peterson went three innings of shutout work while allowing just three hits to go along with four strikeouts as he ended the game to give Sweets the victory by the final score of 9-0.

Walla Walla gets right back to it against the Cowlitz Black Bears with an afternoon game on Sunday slated to begin at 4:35.