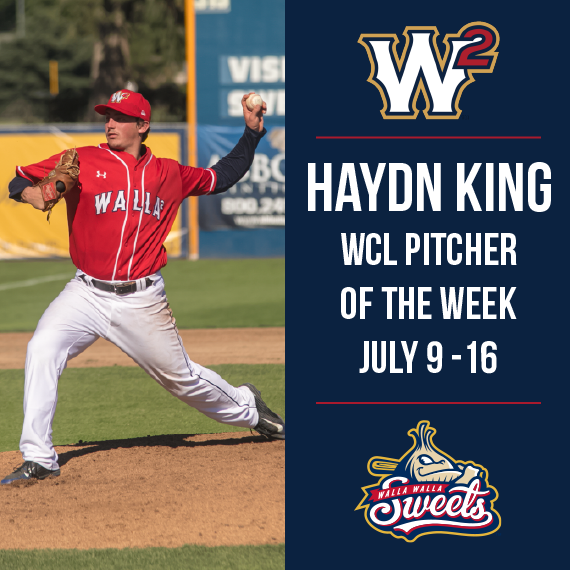 Walla Walla, Wash. – Holding down one of the most potent lineups in the West Coast League while in the smallest park in the league is an accomplishment worthy of recognition. Haydn King did exactly that and as a result has been named the WCL Pitcher of the Week for July 9-16.

King took to the mound on July 11th against the Portland Pickles at Walker Stadium and was absolutely electric. He finished his outing against the first-half South Division champion Pickles going five strong innings with an impressive 11 strikeouts and just one run allowed in a no decision.

Despite not earning the win on the night, King’s start was pivotal to the Sweets taking the game by a final score of 2-1. In two starts against Portland this year, King is 1-0 with a 1.74 ERA over 10.1 innings pitched.

The University of San Francisco lefty hurler has been as good as advertised in his second season with the Sweets. On the year he carries a 2-1 record with a 2.88 ERA and 33 strikeouts over 25 innings pitched.