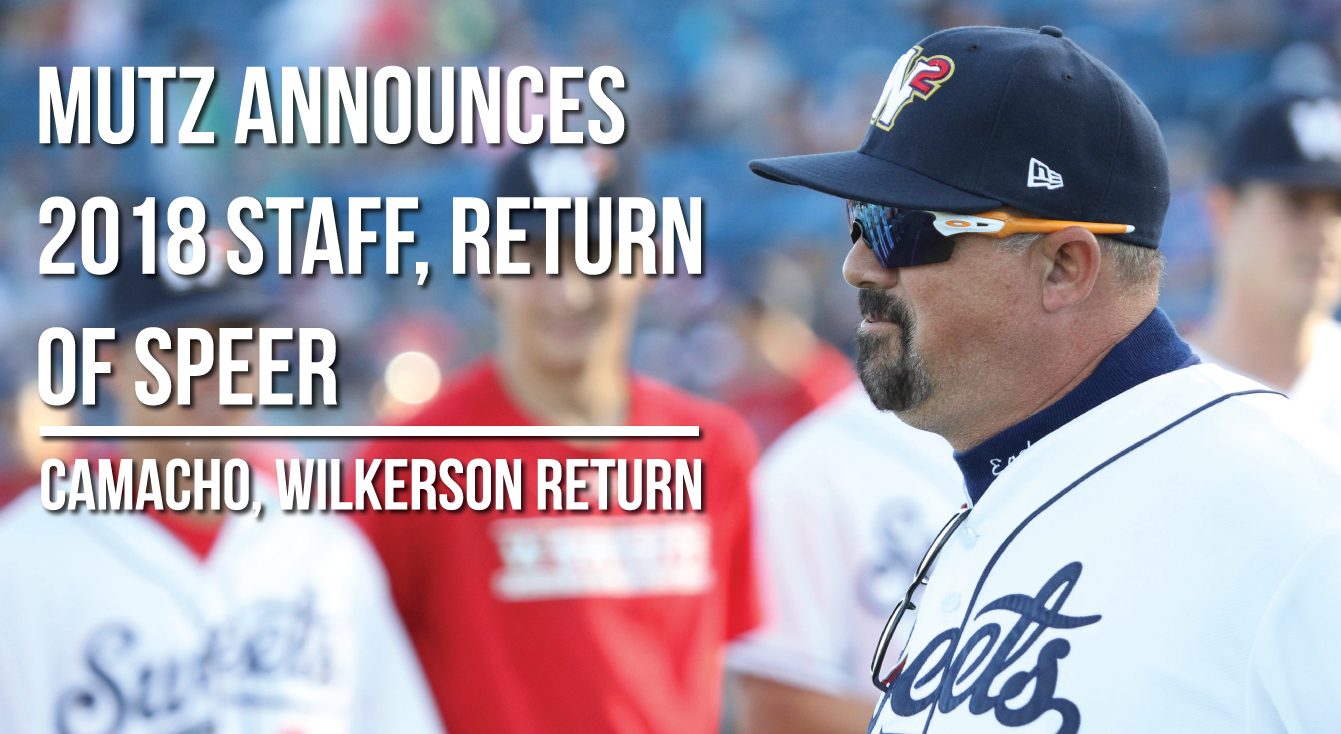 Walla Walla, Wash. – Walla Walla Sweets manager Frank Mutz has announced the coaching staff for the upcoming 2018 season. Mutz, Raul Camacho and Kyle Wilkerson will be back with the team again this season and Justin Speer will join the staff again after previously coaching with the Sweets in 2015.

“I’ve appreciated working with Frank, Kyle and Raul last season, and look forward to welcoming Justin back into the dugout,” said Sweets team president Zachary Fraser. “These are men that care about our community and about winning the right way.”

A native of San Fernando Valley, California, Mutz is currently the head coach at Chaminade College Preparatory High School in West Hills, California, one of the nation’s best programs at producing high school baseball talent. He is back for his fourth year with Walla Walla and said he has thoroughly enjoyed his time with the Sweets.

“I’m grateful to be back in Walla Walla for my fourth season,” Mutz said. “The Sweets have treated me and my family so well that we feel like a part of the community. There is so much to appreciate about Walla Walla, especially the way the fans have supported our ball club since 2010.”

With the coaching staff now assembled, Mutz said this group of men love the game of baseball but most importantly they are all of high character. He also said that he is looking forward to getting back at it with the Sweets this summer with a very talented roster.

“I can’t wait to get the club together in June,” Mutz said. “The entire staff including the front office has done an amazing job putting this 2018 ball club together. With key returners like Nick Nyquist, Danny Sinatro, Jake Suddleson, Ryan Johnston, Dylan Riddle, and Darius Vines, we have a strong nucleus of very good players. If the Sweets can throw strikes, play solid defense, I am convinced we will be in a position to make a strong playoff bid and run this summer.”

Camacho is from Oxnard, California and is back for his second year with Walla Walla where he will serve as the team’s pitching coach. He said that from top to bottom, the Sweets are the best run organization that he’s ever been associated with and that the fan support has been incredible.

“From the front office to the fans, it is top notch,” Camacho said of the Sweets organization. “I loved the hospitality of the people of Walla Walla and really look forward to coming back to that this summer to differentiate from the pace of SoCal.”

Camacho is currently the assistant athletic director at St. Bonaventure High School and had a storied career as the school’s head baseball coach before retiring from the position in 2012. He believes the Walla Walla community deserves a winner and that the staff and the players will work hard to bring it to #SweetsCountry this season.

“I am looking forward to finishing what we started last year,” Camacho said. “I feel the front office has put the pieces in place for this team to be really successful this season. I’m also looking forward to continuing the friendships I have made within the organization and the community of Walla Walla, as well as my daily walks downtown and getting to know the locals.”

Speer is a native of Gresham, Oregon and is currently the head coach of the softball team at Walla Walla Community College. He took over the program in 2015, and over his first three seasons there he has compiled an impressive 84–43 record.

“Walla Walla Community College has been a phenomenal school to work for and I have been blessed with the opportunity to coach there,” Speer said. “The Walla Walla community has been exactly what me and my wife were wanting when we moved here. It has been a wonderful place to work, live and raise my family.”

This will not be Speer’s first tenure with the Sweets, as he spent time as an assistant with the team during the 2015 season. He said it was an exceptional experience his first time around and that he’s thrilled to be back coaching with Walla Walla.

“I’m very thankful for the opportunity to be back coaching with the Sweets,” Speer said. “It means a great deal to be a part of such a professionally run organization like the Sweets that values their coaches, players and employees.”

Wilkerson is from Northridge, California and is back for his third year with the Sweets where he continues to serve as the team’s hitting coach. He said the experience with Walla Walla has been incredible, and that the best part is the small-town atmosphere because the community is so involved and supportive and it makes the drive to win that much more important.

Wilkerson said he is motivated by making his family proud, and that helps him to strive to always improve and get better. He is looking forward to getting to know the new players with the Sweets this summer and of course, a lot of winning.