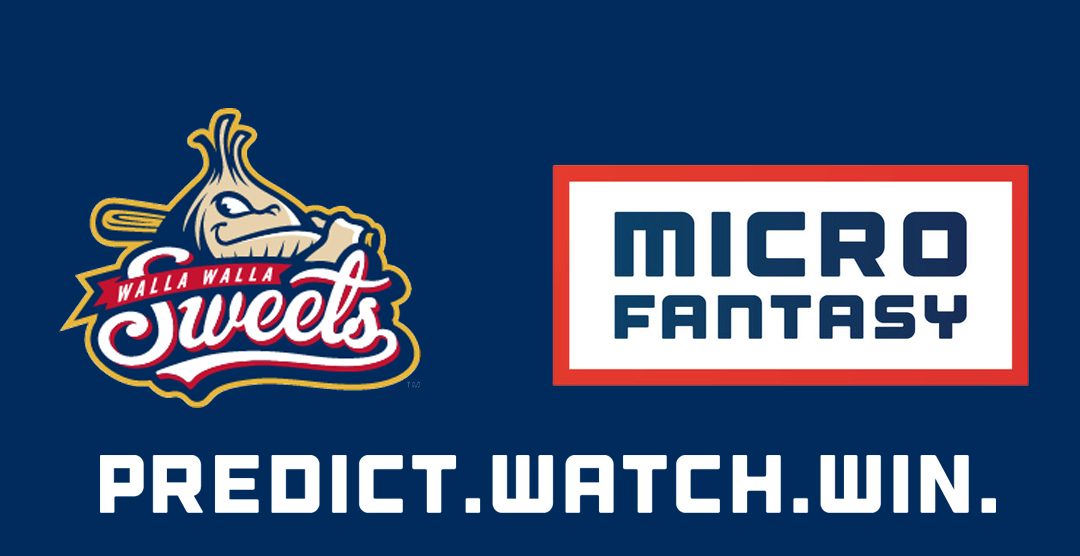 Walla Walla, Wash. – The Sweets have announced a partnership with Micro Fantasy LLC to provide its play-by-play prediction contests to fans for all 2018 Walla Walla home games. Micro Fantasy LLC was formed in 2015 in Brecksville, Ohio, and its mission is to increase fan enjoyment in live sporting events through real-time, play-by play prediction contests.

All attendees of 2018 Sweets’ home games with the Micro Fantasy app installed on their mobile phones (iPhone or Android) can participate in Micro Fantasy predication contests. Those watching Sweets’ games online (wallawallasweets.com) or listening to games on the radio (Fox News Walla Walla 99.7 FM| 1490 AM) can also participate in the contests.

The Sweets open their 2018 season by visiting their sister team, the Yakima Valley Pippins, on June 1 as part of a three-game series. Whether fans travel to Yakima Valley to cheer on their Sweets for their first three games in as many days, or watch the games stream live, fans can play along with each batter in real time. With the free Micro Fantasy sports prediction app fans pick from ten options to guess whether the next batter might fly out, strike out, walk, or hit a home run!

“We are thrilled to partner with Micro Fantasy to bring their prediction gaming contest to Walla Walla fans this season,” said Sweets general manager Dan Ferguson. “Joel Crites has created a great game that brings the fun and essence of fantasy sports to fans of all ages. With how successful Micro Fantasy has been across the landscape of athletics, we have no doubt it will be a hit with Sweets fans.”

Walla Walla fans will have the chance to participate in three contests that last three innings over the course of a full nine-inning game. At the end of each third inning, the person with the highest score for those three innings will win a prize for one of the contributing sponsors which currently include Domino’s Pizza, Chrysler Dodge Jeep Ram of Walla Walla, and Legends Casino.

The Micro Fantasy prediction contest mobile app is currently available for download through the Apple App Store and Google Play. An online version is also available on microfantasy.com. Micro Fantasy contests are available for baseball, softball and football games. Contests can be scaled for every level of play from pro to youth. Contests for other sports are in development.

“The Walla Wall Sweets have had an outstanding history since they began nine years ago. We are looking forward to being a part of their ongoing success as it relates to fan experience & delivering sponsor value,” said Micro Fantasy Founder and CEO Joel Crites. “We are extremely fortunate to work with a proven baseball executive in Zachary Fraser. His involvement will surely help us continue to improve our product to best meet the needs of teams in collegiate summer baseball.”