Young trio will play key role for the Sweets this summer 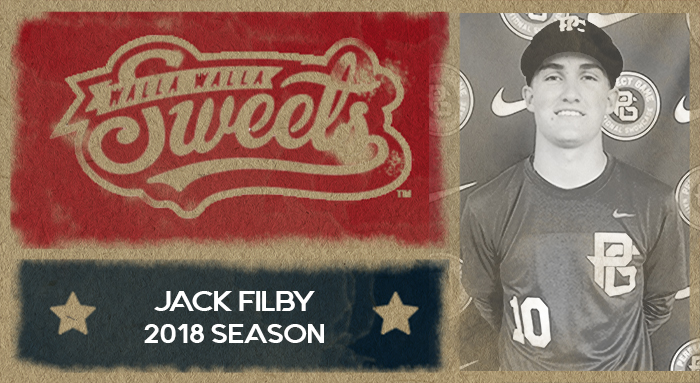 Walla Walla, Wash. – Three graduating high school seniors who are committed to play at the Division I level will join the Sweets for the 2018 season. Jack Filby (MIF, C/ UCLA), Sean Sullivan (RHP/University of California, Berkeley), and Patrick Collins (RHP/University of San Francisco) will suit up for Walla Walla this summer.

“I knew [the Sweets] were in a very competitive league where there are a lot of D1 guys who want to play the game at the next level,” Filby said. “I knew it was the right destination for me.”

“I just think it’s an experience every college player should have, playing for a collegiate team over the summer and playing with a bunch of different guys going to different schools,” Sullivan said. “I know some guys on the team too, so it’s going to be a lot of fun.”

“It all started with Coach Mutz inviting me,” Collins said. “Then I really looked into it, and I saw it was a great chance for me to see college hitters before I actually went to college and that really intrigued me.”

“I’ve had the privilege to play varsity since I was a freshman, so I’ve been entrenched in varsity baseball with a lot of high-level play and older guys which has allowed me to mature and grow as a player on and off the field,” Filby said. “It’s brought a lot of fun to my life allowing me to play the game that I love, which is baseball.”

“I committed there because it was my dream school,” Filby said. “I enjoy Westwood and So-Cal, so that really appealed to me. They produce a lot of great players, and I’m hoping to be one of them.”

“The baseball team is pretty much my home here,” Sullivan said. “It’s definitely a home away from home. I look forward to coming out here every single day and playing with my brothers. It’s a lot of fun and we get after it out here.”

Sullivan is committed to play for the University of California, Berkeley next year and said the chance to play in a beautiful area and in a high-caliber conference was an opportunity he could not pass up.

“I’m really fascinated with the Bay area,” Sullivan said. “I love the overcast weather and the coaches [at Cal] are amazing. Each and every one of them are really kind, really great guys. Their program is outstanding, Pac-12 baseball, that’s a given. I’m really fortunate that I got the opportunity to play there.”

Collins is a native of Calabasas, California and is currently attending Chaminade College Prep High School. He finished last season with a 4-0 record, a 1.15 ERA, 50 strikeouts in 61 innings pitched, and was named Mission League Pitcher of the Year.

“It’s been nice because it’s more of a laid-back atmosphere,” Collins said of the Chaminade baseball program. “We all love playing baseball and working hard when we have to, but we have a good time doing it.”

Collins is committed to play at the University of San Francisco next year and said after spending a lot of time in the city over the years that he always knew it was somewhere he wanted to be.

“I’ve always loved San Francisco because my dad is from there, and I still go up there all the time,” Collins said. “It’s always been a dream of mine to play Division I baseball so when I got the chance to play [at USF] I felt like it was a perfect match for me.”

Sweets head coach Frank Mutz has had the opportunity to coach both Sullivan and Collins over the last four years, as Mutz is also the head coach of Chaminade College Prep High School. He said that both players will play a vital role for the team this summer as members of the Sweets’ pitching staff.

“Sullivan is a hard throwing RHP and an incredible athlete,” Mutz said. “He is a guy who performs better in the big situations, and I’m confident will be a great asset to our pitching staff. Collins is one of the most competitive pitchers I’ve ever had pitch for me. He will be used in several roles this summer and adds a dynamic repertoire of pitches most high school and college pitchers don’t have.”

Coach Mutz has not had the opportunity to coach Filby, but still said that if [Filby] is not the top high school bat in Northern California, he’s certainly on the short list.

“We have high expectations for Filby and plan to have him in the top of our lineup,” Mutz said. “He is a complete player, and the only concern I have is that we may lose him to the 2018 MLB Draft.”