Kutzke and Lesmeister set to don the Sweets uniform in 2018 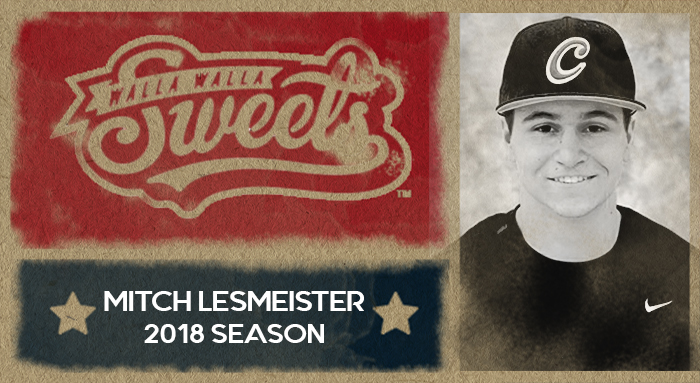 Walla Walla, Wash. – From fans in the stands to playing on the field, two notable local athletes will be in action for the Sweets this coming season. Junior Josh Kutzke (IF/South Dakota State University) and freshman Mitchell (Mitch) Lesmeister (Util/Central Washington University) will be playing right in the backyard of their hometowns this summer for Walla Walla.

“Growing up going to their games and watching them play, I’ve always aspired to eventually play for the Sweets,” Lesmeister said. “I finally got the opportunity this summer, so of course I took it, and I’m super stoked about it.”

“I joined the team because I want to better myself as a player,” Kutzke said. “And the experience [of getting to play for Walla Walla], not many people get a chance to do something like this.”

Both players have been staples of the Walla Walla athletic community over the last several years.

A native of College Place, WA, Lesmeister played baseball, football, and basketball at Walla Walla High School. Fans of Blue Devil athletics have probably grown familiar with his name over the last few years. Lesmeister racked up a laundry list of accolades in all three sports.

“To be honest, I don’t know how long I would’ve lasted in football,” Lesmeister said. “I feel like baseball is a little easier on the body. Not that it’s an easier sport, but at least injury-wise, I can play it longer into my life than football…so I thought baseball was the right choice for me.”

Kutzke, a Kennewick, WA native, played his first two seasons of collegiate baseball at Walla Walla Community College before transferring to South Dakota State University this past fall. He said the coaches at WWCC were outstanding and that he has fond memories of playing for the Warriors.

“I loved it there,” Kutzke said. “If CC was a four-year school, I would have stayed there, definitely. It’s a place I’ll never forget and will always be close to me.”

Kutzke posted some outstanding offensive numbers while playing for WWCC. He finished his two-year stint with a .279 batting average, six homeruns, 27 doubles, 60 walks, and 57 RBI. What really set him apart was his ability to get on base. He also led his team in nearly every offensive category his sophomore year in 2017.

With both players growing up in #SweetsCountry, they had the chance to go to several Sweets games since the team’s inception in 2010. Kutzke and Lesmeister said they are looking forward to playing in front of the great Walla Walla fans and having the opportunity to play in the historic Borleske Stadium.

“Borleske is a one-of-a-kind experience, and you’re not going to see another baseball stadium like it,” Lesmeister said. “Then of course there’s the Walla Walla fans. They love the Sweets, and I’m really excited to be a part of that atmosphere this summer.”

“To me, it’s how the fans support the team so well and show up to all the games,” Kutzke said when being asked what makes the atmosphere at Borleske so special. “All the people of Walla Walla show love to the team, and that’s what I like most, the support from the community.”