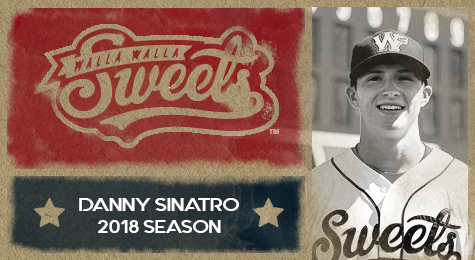 Sinatro paired with fellow WSU outfielder J.J. Hancock to create a dynamic 1-2 punch at the top of the lineup during the 2017 season. Hitting .297 and with a robust on-base percentage of .408, Sinatro’s combination of speed and a keen eye at the plate allowed him to serve as a catalyst for sluggers like Hancock, returning OF Jake Suddleson and All-Star Nick Nyquist. Originally signed as an infielder last season, he was converted to an outfielder for the WSU squad and proved that he was a plus defender.

“(Danny) Sinatro brings so much speed to the top of our lineup,” said Sweets manager Frank Mutz. “After another PAC-12 season under his belt, we believe Danny will be one of the top prospects in the West Coast League during the 2018 season.”

“I’m truly thankful for another opportunity to play in front of such great fans and for a great organization,” he said, when asked what he looked forward to the most about coming back to Borleske. “I can’t wait to be a Sweet again this summer.”

A late addition to the roster due to academic requirements in Pullman, Calderhead was impressive in a limited role. With a fastball that sat 9194 MPH, and a devastating wipe-out slider, he kept hitters off-balance out of the bullpen. In 16.2 innings pitched during the 2017 season, he struck out 18 while walking 7, and opponents hit just .227 off of him. While it is likely that he will be used in a multitude of roles, Mutz anticipates that one of those roles could be as the Sweets closer.

“This season, we get him for the full year – I can see him developing into one of the top closers in the WCL,” said Mutz. “Knowing that we have a guy that we can run out of the bullpen with electric stuff is of great comfort to our coaching staff.”

The Redmond, WA native is a strong student as well. He was among six WSU student-athletes (including 2017 infielder Shane Matheny, who was drafted and signed by the San Francisco Giants while with the Sweets) named to the All PAC-12 honorable mention academic team.

“I’m excited to be back in front of the best fans in the WCL,” said Calderhead while home during the Christmas break.

Moyle, from Carson City, NV, is a freshman who the Cougar coaching staff is expecting will make an impact this coming season. Dan Spencer, the Cougars pitching coach, was quoted in a Nevada Appeal article highlighting Moyle’s letter of intent signing, that Moyle is a strike thrower who can deliver to both sides of the plate.

Moyle has already heard about the experience players have in the Walla Walla Valley, and can’t wait to make his way to the market.

“I feel blessed to start my WCL career with the best market in the league,” said Moyle.