A look back on the summer season in Walla Walla 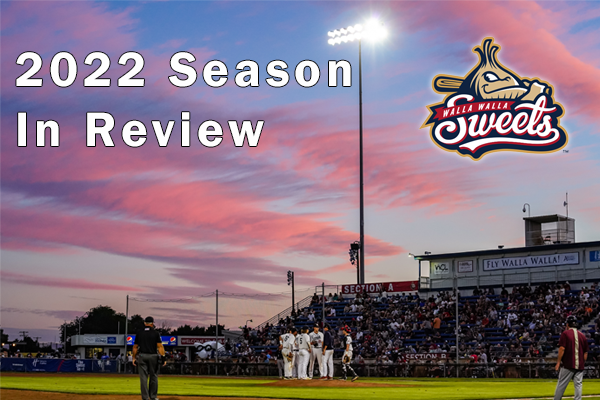 WALLA WALLA, Wash- The Walla Walla Sweets wrapped up a roller coaster of a 2022 season with a 23-31 record. While the Sweets may not have finished with the most ideal record there were still plenty of memorable moments to look back on.

The season started with Walla Walla traveling to Ridgefield to face off with the Raptors. During that set, the Sweets were heavily shorthanded. Walla Walla would only have 17 players and one coach make the trip to Western Washington. Despite the lack of Sweets Walla Walla would still go on to take on game on the weekend and the first win for assistant coach Peter Abinanti. In the final game of the series the Sweets and the Raptors would combine for a historic scoring mark with the final finishing 23-12 the highest score in the history of the WCL. 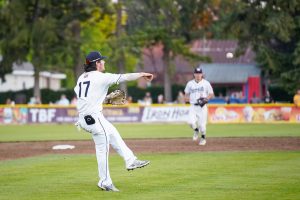 Walla Walla would remain short handed for their next series in Yakima but would gain more members including the likes of Davis Mieliwocki, Kai Osaka, Jordan Andrade, Nick Strong, Alec Holmes and pitching coach Brandon Vial. Walla Walla would take their first series of the year taking two of three vs the Pippins sending the Sweets back to Walla Walla with momentum before opening up Borleske for 2022.

While it took a little bit longer than they may have wanted the Sweets would secure their first win of the year with a dominant 11-4 win over Cowlitz. In that contest the Sweets lineup would fully start to take shape as guys like Mieliwocki, Osaka, and Strong would have strong outings. However the show was stolen by a pair of dingers by Malcolm Williams and a grand slam by Leo Rivera. The Sweets were also joined by Manager Brandon Van Horn who would go on to lead the Sweets to a strong few outings.

Following the big win the Sweets would proceed to get hot, winning 7 of eight with the win streak culminating with Walla Walla ending Corvallis 9 game win streak to start the year.

The Sweets would struggle near the end of the first half of the year with tough losses to Yakima Valley and Kelowna, and the second half didn’t much better with difficult series vs Portland and Bend with the Sweets only winning one of those six. 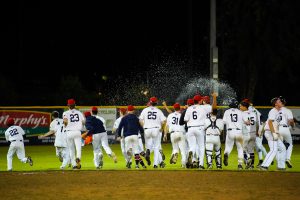 The Sweets would need to go on a run and that’s exactly what happened. Walla Walla would go on to take four straight series vs Bend, Springfield, Kelowna, and Wenatchee. The Sweets looked adversity straight in the eyes and over came it. The run started with on of the most interesting games of the year as Walla Walla would walk things off in extras thanks to Leo Rivera scoring by way of an fielding error to take the finale vs Bend at home 10-9.

Rivera’s heroics would not be done as two games later the captain of the Sweets would show off his Ironman ability in a 13-10 win over Kelowna. Rivera would score three times in the win starting the game at third base, however due to a lack of pitching depth in the trip up north Rivera would be forced onto the mound. Rivera would go two innings scoreless on route to a winning decision.

Another Sweets who worked strong in the winning streak was Joey Craig who helped bring a lot of life to the Sweets. From July 15th to the 23rd Craig would bat .318 with 2 HR and 11 RBI’s.

Joey Craig (@VaqueroBaseball) with a 2-run HR (3) to extend the @WWSweets lead!

The Sweets would struggle finishing the year with back to back sweeps by the hands of Portland and Corvallis despite a few great pitching performances by Kolby Solomon, Caden Kaelber, and Jace Hansen.

The Sweets would look to end the year strong and that’s exactly what they did taking the final home series of the year vs Ridgefield.  The final home game was a special one for one member of the red and blue in particular. Rivera who was a four year member and two time team captain for Whitman he got set to play his final game at Borleske. Rivera would get the special opportunity to play all nine positions in the course of one game. The Sweets would end up taking the final home contest 7-2 to wrap up the year for the Sweets captain.

Walla Walla would finish off their year on the road at Wenatchee where they would again show off their grit. In the final game of the series Walla Walla trailed by two going the ninth. However the Sweets would explode for five runs in the top of the ninth thanks to pitcher Zach Ediger driving in three runs to give the Sweets the lead. Nick Seamons would follow it up with a two run homer and the Sweets would take things 7-5 to close out their campaign.

On Base Percentage- Will Fuenning (West Texas A&M) .485