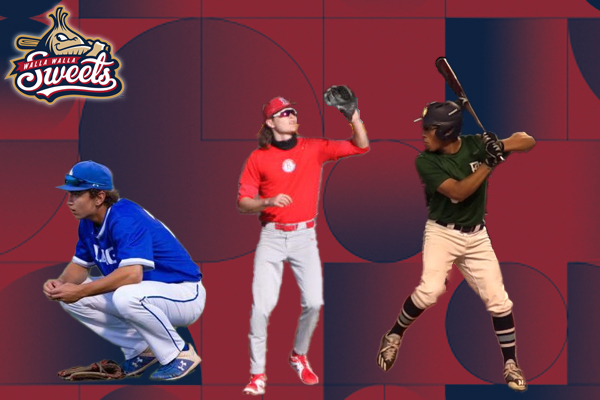 WALLA WALLA, Wash- Cooper Cross, Devan Ornelas and Josh Williams will be heading to Walla Walla this summer to join the Sweets.

Cross joins the Sweets by way of Reno, Nevada. The 5’11 lefty brings a combination of speed and power to Walla Walla. Cross is a very athletic outfielder who primarily sees himself working in center field. Cross is currently attending IMG Academy in Bradenton, Florida. Cross is the youngest of the three outfielders and the only one to not play collegiately. Cross plays at one of the strongest athletic programs in the country, so he is no stranger to playing top-tier competition at a young age.

“I think I’ve gotten a little hint of that at IMG (because) we do play baseball every day,” said Cross. “So I think that having that background will help me a lot going into the summer league.”

While Cross is one of the younger members on an already youthful Walla Walla squad, he says he’s not bothered by the possible age gaps in the West Coast League.

“I think I’m going to go in there trying to prove it. Age isn’t really something I’m concerned with; I know I can compete with the older guys,” said Cross. “I think it’s going to come down to who’s more competitive and who’s putting the work in.”

Williams joins the Sweets from the Golden State of California. Williams is from Fresno County city of Clovis and plays collegiately at UC-Santa Barbara. Williams is in his freshman season at Santa Barbara and will start his regular season at San Francisco on Feb. 18. Williams played high school ball at Buchanan High School, where he was a two-year member of the school’s varsity program that has won 12 conference titles and two national titles. The 6’2 outfielder also played basketball for the Bears.

Most recently, Williams played summer ball for the Medford Rogues of the Golden State Collegiate Baseball League. Williams said his experience in Southern Oregon was incredibly valuable looking toward playing with the Sweets.

“I’ve dealt with it playing with the Rogues this summer, granted I only played for a month due to my high school season getting backed up. But for the month I did play for the Rogues, it was baseball 24/7 and I’d say I really liked that,” said Williams.

The Rogues previously were a member of the West Coast League from 2013-2015.

Ornelas is also a California native, joining the Sweets from just outside of Los Angeles in Chatsworth. The 5’10 outfielder at Loyola Marymount is a transfer from TCU, but he didn’t appear in any games for the Horned Frogs. Ornelas played at Notre Dame High School, which is when he made the transition to the outfield, where he says he’s become more comfortable on the baseball field.

Ornelas has previously played summer ball up in Alaska as a member of the Anchorage Glacier Pilots of the Alaska Baseball League. Ornelas had 13 hits and 8 RBIs and valued the experience playing away from home.

“You want to be the best player that you can, but when you have that opportunity to play somewhere, even if it’s somewhere far from home, I think it’s a great opportunity that someone should take,” said Ornelas. “It was fun. I learned a lot about the game and a lot about myself.”