Sweets add three freshman pitchers to their roster for this summer. 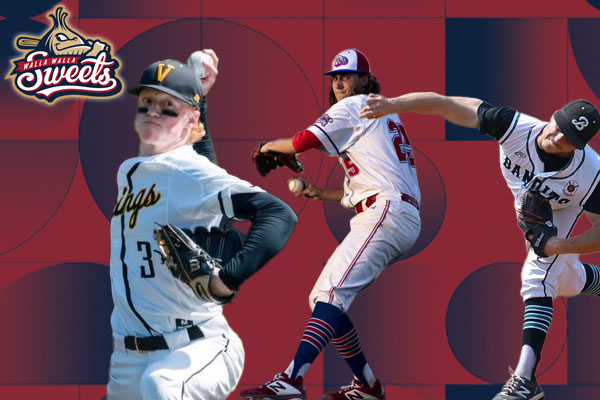 WALLA WALLA, Wash- Kolby Solomon, Jace Hanson, and Coby Richards will all be joining the Sweets this summer. All three pitchers come from the northwest and play collegiately in the state of Washington. Solomon and Richards are entering their first seasons of college baseball, as Hanson enters his second year, however, is only a freshman due to the COVID year awarding him an extra year of eligibility. This will be the first year with the Sweets for all three players.

Solomon joins the Sweets by way of Spokane and Gonzaga University. The freshman right-hander stands at 6’0 and is looking to make an impact in his first year with the Zags. Solomon was a  two-sport football/baseball star for Inglemoor High, where he earned First Team All-KingCo Honors with an ERA of 1.12, while also leading the league in K’s (62) and second in wins with 6 in his senior season. Solomon has a cumulative 3.95 GPA at Gonzaga, as he gets it done on the field and in the classroom. As a younger pitcher, he will work mainly in relief for Gonzaga however is looking to make an impact in any way possible.

“We have top prospects on our team which is super nice, so getting the chance to look up to those guys,” said Solomon “Whatever role I can fit into I will fit in. I just want to play.”

Solomon is coming off a major injury where he needed Tommy John’s surgery, however has said the recovery process has gone well.

Hanson joins the Sweets by way of Yakima Valley College. Hanson is a big 6’5 right-hander from Ammon Idaho. The eldest out of the trio posted a 5-0 record in 6 starts with the Yaks in his freshman season, posting a 4.33 ERA with 30 K’s in 27 IP. Hanson is currently a Freshman athletically due to the COVID year awarding him an extra year of eligibility. Hanson also finished 6th in the NWAC in wins. The big righty likes to pound the zone and test batters at the plate to try and beat him whenever he steps on the mound.

Richards is another Yak making the trip out to Walla Walla this summer. The Belgrade Montana native is entering his first year collegiately at Yakima Valley. Richards previously played Summer Ball for his hometown’s Belgrade Bandits.

“I’m happy for the opportunity and I’m excited to get to play for the Sweets and in this competitive league,” said Richards. “This is a great chance for me to show my stuff and I can’t wait for this summer.”