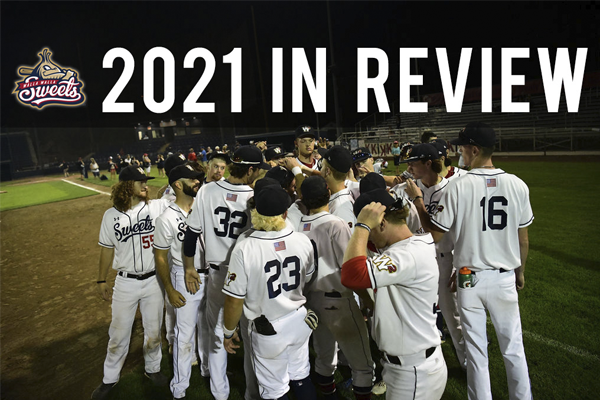 The Walla Walla Sweets concluded their 11th season as a franchise August 12. With another season in the books, the Sweets look back at some of the best memories and accolades of the 2021 campaign.

Despite the Sweets finishing with a record of 15-33, there were still several notable performances, both individually and team wise, from the hometown onions, particularly on the pitching side.

From a team standpoint, the Sweets set a new strikeout mark and shattered the previous record of 471 strikeouts set by the 2016 Sweets squad. Needing just 48 games to do so, the 2021 Sweets piled up 507 punchouts, exceeding the previous record by 36 and posting the second best strikeout total team wise in the WCL.

Three different pitchers, Caden Kaelber, Travis Craven and Logan Hurd, all finished the season with over 50 punchouts. Kaelber and Craven posted 64 and 63 strikeouts, respectively, to finish second and third in the league.

Sweets interim manager Larry Price said his pitching staff’s resilience stood out the most to him.

“With all the injuries and adversity our pitching staff faced throughout the year, they did a terrific job of pulling through,” Price said.

Individually, Craven and Kaelber both put themselves in the Sweets record book. Craven set the single season record by a Sweet for most innings pitched with 61 1/3 innings across 16 appearances. The lefty from Whitman College also struck out 14 batters in a single start against Wenatchee on July 21 and was awarded West Coast League Pitcher of the Week honors the following week, joining Brandon Llewellyn as the two Sweets to win the award in 2021.

In his final start at Borleske Stadium and on the final day of the regular season, Craven threw six innings and struck out eight batters. Craven was greeted to a standing ovation by the Sweets crowd and dugout after exiting the game.

“To be able to pitch four years for Whitman and two years for the Sweets ere in Walla Walla was something that I’ll cherish forever,” Craven said. “I’ve made so many great memories here and its been so special to be a part of the community here in Walla Walla.”

Craven will continue his baseball career at USC in his home state while enrolling in the biokinesiology program.

On the hitting side, Parker Price led the way for the Walla Walla Sweets. Price finished the season hitting .310, which paced all hitters in the North Division in the West Coast League. Price also led the team with seven doubles while hitting two home runs and 13 runs batted in

After missing his entire spring season to a knee injury, Price returned in a big way in the summer for Walla Walla. Having a positive mindset and working hard to get back in game shape made all the difference for the infielder from Northwest Nazarene University.

“Injuries, especially meniscus injuries, are always tough to bounce back from,” Price said. “You can either sit around and mope or stay positive and get back on your feet. To be able to get back on the field this summer and play again for the Sweets was a great experience.”

While Price put up good statistics, his leadership on the field in what stands out the most to his father and manager.

“Parker is a terrific vocal leader and always brings the best out of his teammates,” Larry Price said.

The Sweets began their 2021 season with a shutout victory over the Cowlitz Black Bears on the road, one of two shutout victories for the Sweets on the season. They wasted no time posting more strikeouts after, punching out 18 batters as a pitching staff the next game.

The most memorable of the 15 wins came on July 23, a night in which the Sweets erased an early seven run deficit to earn a 9-7, comeback win over the Bend Elks. The win as the largest comeback win of the season for the Sweets, highlighted by a go-ahead, bases clearing triple in the eighth inning by Paul Myro IV.

As for team leaders, Eli Paton paced the Sweets with five home runs. The redshirt freshman from UCLA was the only Sweets player to homer twice in a single game, doing so on July 29 against the Corvallis Knights.

Despite the Sweets not having the success they envisioned this past season, the players and coaches reflected positively on their time in Walla Walla.

“This summer was so enjoyable, and it makes saying good bye that much harder,” Price said. “I’m going to miss all of these players. This was really a special group.”