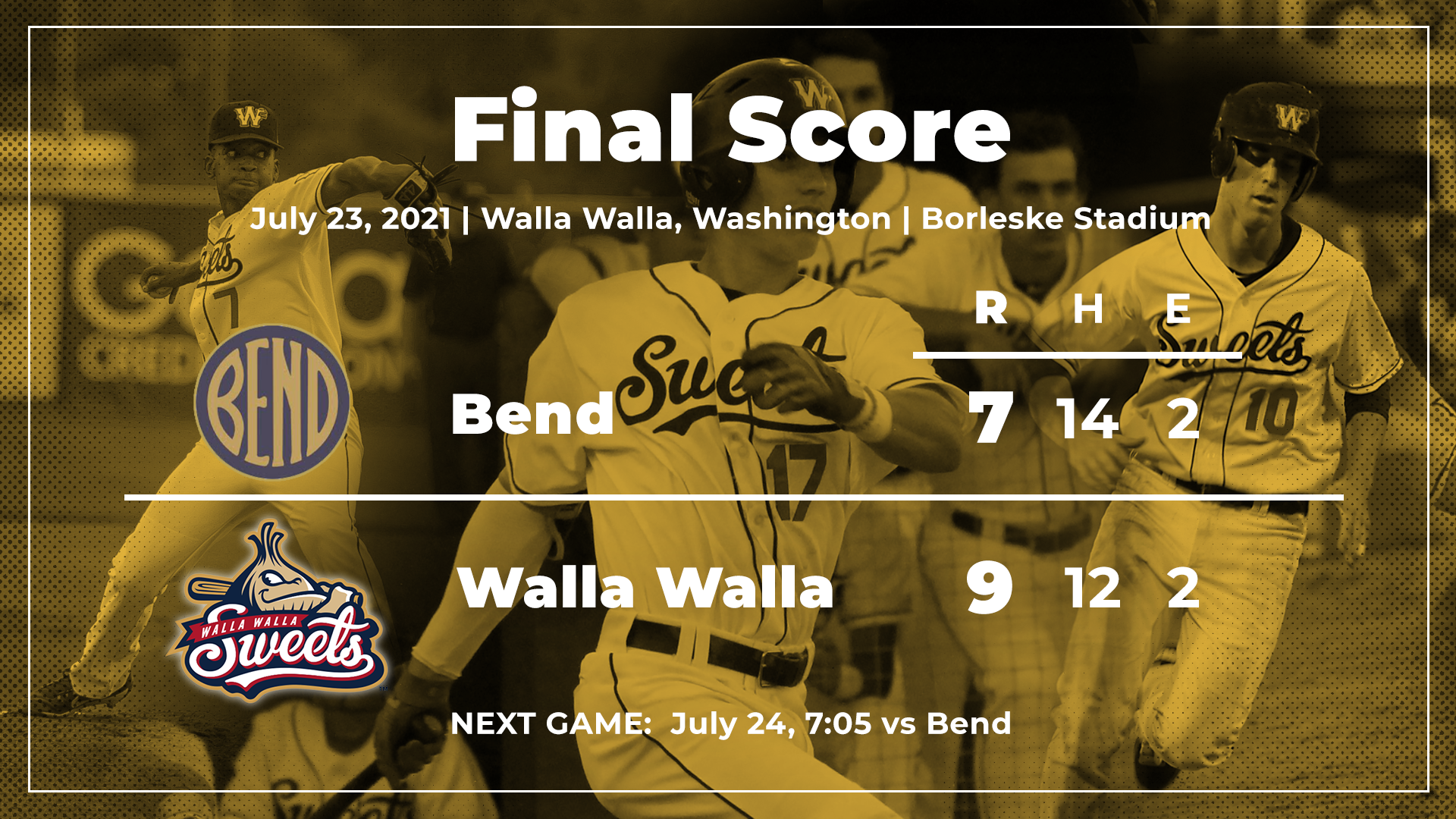 The Walla Walla Sweets earned their biggest comeback win of the 2021 season with a 9-7 win over the Bend Elks Friday.

After trailing 7-0 going into the bottom of the fourth, the Sweets scored nine unanswered runs to earn their 14th win of the season and improve to 5-5 in the second half.

The Bend Elks produced a six-run top of the second inning to take a big lead early on. Bend picked up six hits in the half inning and also took advantage of two Walla Walla errors to jump ahead early against Sweets starter Calvin Kirchoff. The inning was highlighted by a two-run triple by Chase Matheny, who now leads the Elks with 17 runs batted in.

After an RBI single by Gavin Logan made it 7-0 Elks in the top of the 4th, the Sweets got to work offensively. After a single by Colin Wetterau and back-to-back hit by pitches by Justin Folz and Eli Paton, Matthew Clark delivered the first grand slam of the summer for the Sweets on a homer over the left field scoreboard. Clark is now tied for the team lead with three home runs.

Folz helped cut into the deficit one inning later. The Sweets left fielder ripped a ball into right field to score Parker Price and make it a 7-5 Elks game. Folz knocked in his 11th run of the year and his sixth run in his last eight games.

Both teams would go scoreless from the top of the sixth to the top of the eighth, largely thanks to the effort of relief pitcher Joe Ball. The lefty from Lewis-Clark State turned in  his best outing of the year, setting new season highs with four innings of scoreless baseball and six strikeouts.

“Joe Ball kept us in that game and did a great job of getting out of some tough spots,” Folz said.

In the eighth, the Sweets were able to break through and take a lead that they would not relinquish. A single, error and a walk loaded the bases with one out for Sweets leadoff hitter Paul Myro IV. The Walla Walla infielder ripped a 2-2 fastball down the right field line for a bases clearing triple, giving the Sweets an 8-7 lead. Parker Price would single in Myro IV one batter later, giving Price a season high four hits and the Sweets a 9-7 advantage.

Sweets closer Eric Romo ran into a bases loaded jam in the ninth, but struck out two hitters in a row to close it out and earn his sixth save of the summer. Romo is now tied for the WCL lead in saves.

Ball earned his first win of the season for Walla Walla, while Eli Ankeney picked up the loss for Bend. The two teams combined for 27 hits, with Price leading the way for the Sweets with four. Gavin Logan had a four hit night for Bend.

The two teams meet again Saturday at Borleske Stadium starting at 7:05. Tickets are available at www.sweetstickets.com.