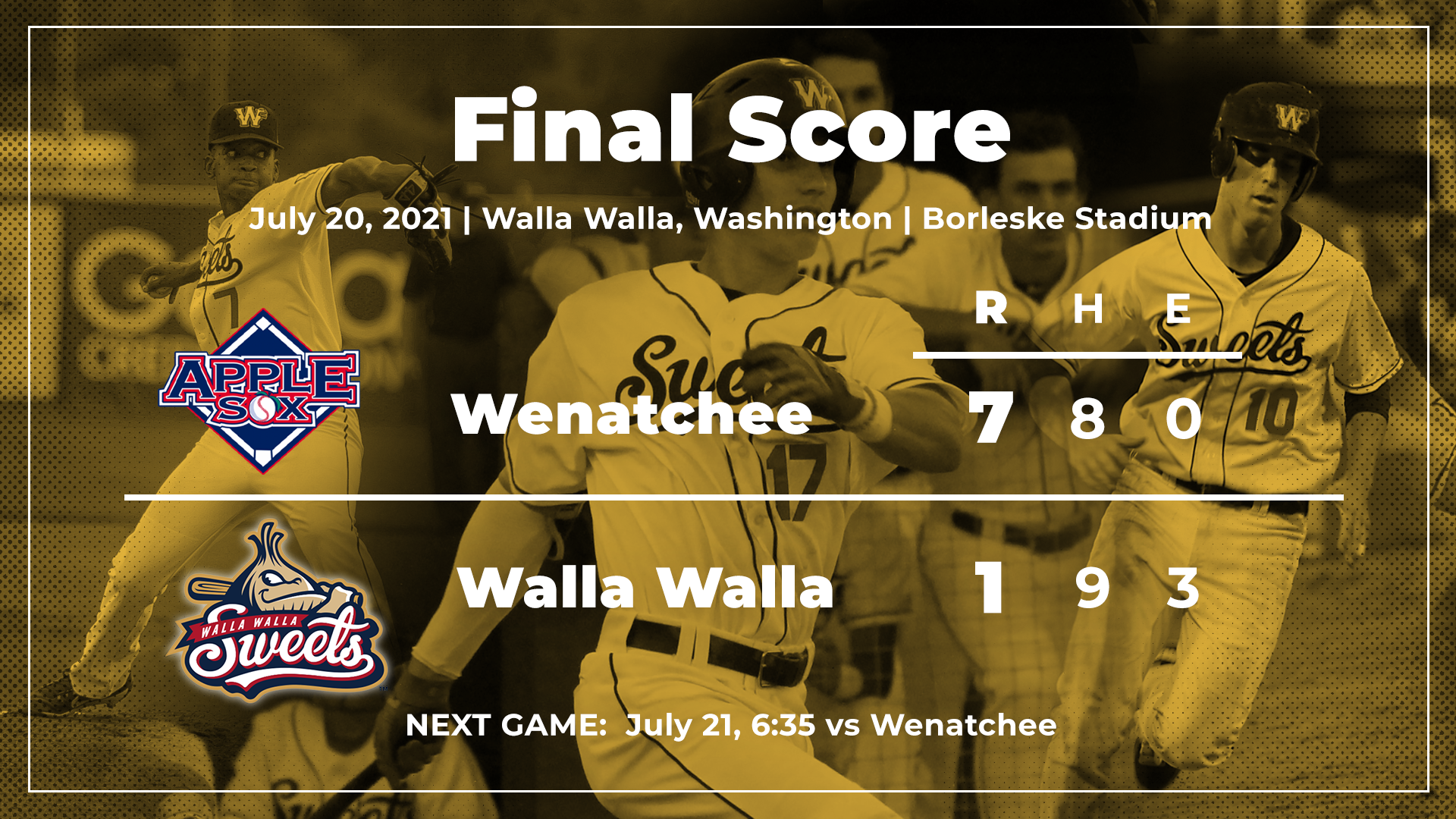 The Walla Walla Sweets struggled to produce timely hits Tuesday in a 7-1 loss to the Wenatchee AppleSox.

The Sweets had opportunities throughout the game to score with men on base, including a bases loaded, nobody out situation, but couldn’t cash in with the exception of the fifth inning.

The lone run of the game for Walla Walla came on a fifth inning RBI triple by Chris Conniff. Conniff drove in his seventh run of the season and now leads the team with three triples.

Outside of that inning, the Sweets were held scoreless and left eight men on base in total. The Sweets started the bottom of the sixth with three singles to load the bases, but reliever Michael DeFelippi struck out the next two batters he faced. Cayden Delozier lined out to third to end the inning as the AppleSox left-hander escaped unscathed.

Wenatchee took control of the game early and never relinquished the lead. Michael O’Hara started the game with a double, and was driven in by an RBI triple by Adam Grob two batters later. Grob picked up his first triple of the summer along with his team leading 23rd run batted in.

Wenatchee posted two more runs in the fourth off of two errors. Following his leadoff walk, Tino Bethancourt scored on an errant throw by catcher Colin Wetterau. Luc Stuka scored the other run of the inning on a dropped fly ball in right field.

The AppleSox took a commanding lead in the ninth after neither team scored from the fifth through eighth. Wenatchee picked up five consecutive hits to start the inning and posted a four run, five hit top of the ninth. The inning was highlighted by two two-run singles by John Newman Jr. and Dakota Duffalo.

Mason Kokodynski, the starter for the Sweets who had the second best ERA in the WCL entering the game, was charged with his first loss of the season. The Sweets ace went five innings and allowed two earned runs with four strikeouts.

Cole Hatton picked up the win as the starter for Wenatchee. He also threw five innings and allowed five hits, one earned run, three walks and struck out five. The AppleSox bullpen got four scoreless innings from their two best relievers in terms of ERA, DeFelippi and Skylar Hales. Hales picked up a three inning save while striking out four hitters.

The Sweets and AppleSox meet again Wednesday at Borleske Stadium starting at 6:35 PST.