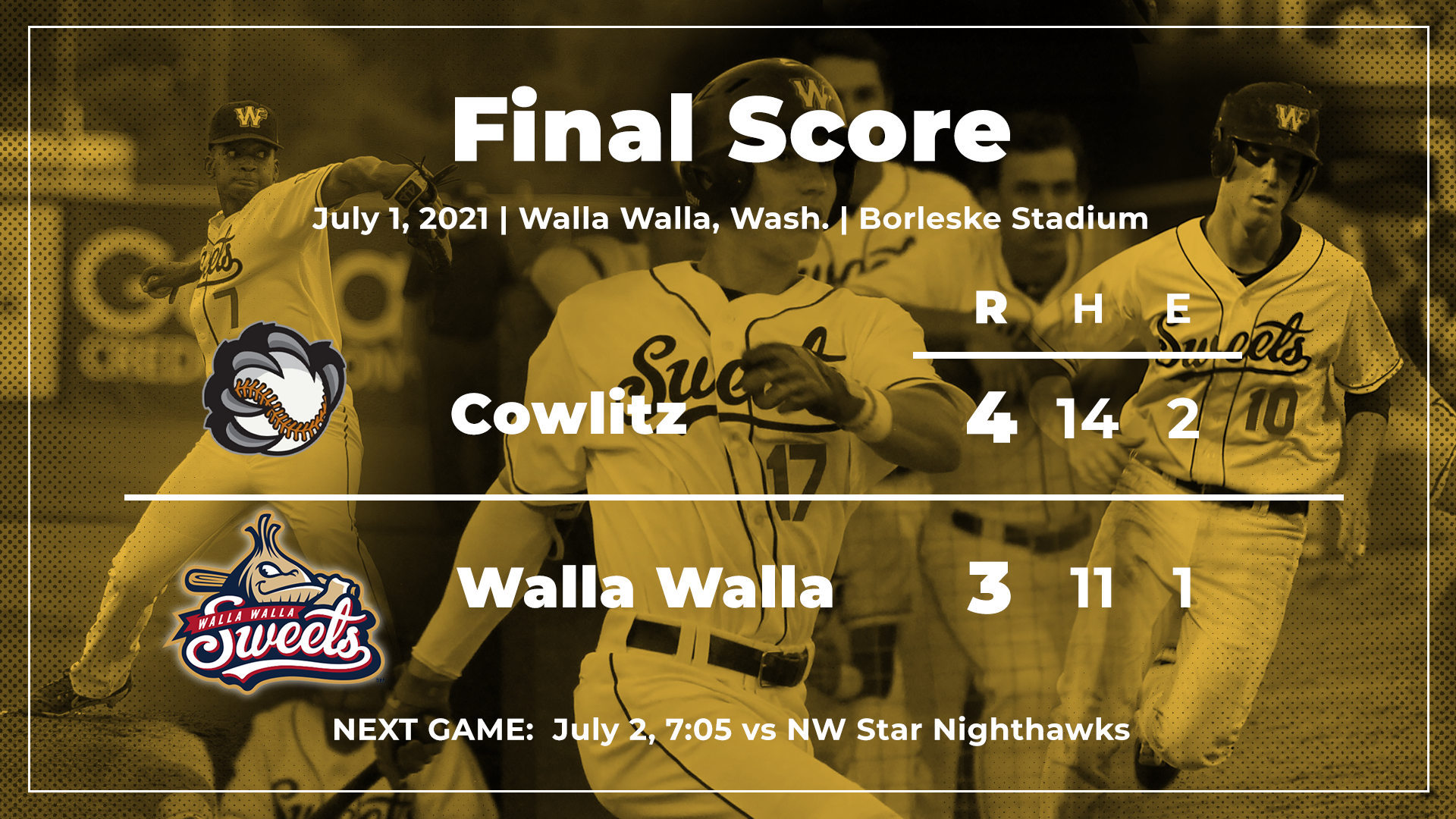 In their second extra-inning  game of the week, the Sweets fell short in 15 innings against the Cowlitz Black Bears.

The Sweets have now played 15 innings in multiple games in the same week for the first time in team history. With the loss, the Sweets fall to 8-10 but remain in second place in the West Coast League North Division.

The Sweets got the first run in the ballgame on an RBI single by Jack Sheward in the bottom of the fifth. The first seven innings were dominated by pitching, with each starter going at least innings.

Travis Craven turned in a solid outing for Walla Walla. The left-hander went six innings and did not allow a run while surrendering just four hits. He also struck out five batters without issuing a walk.

Izaak Martinez was equally as effective on the other side for Cowlitz. The left-hander from California went 6 1/3 innings and allowed one unearned run. Like Carven, Martinez did not strike out many hitters but forced plenty of groundballs and flyouts.

Both teams did not get going offensively until the eighth inning. With two outs in the top of the eighth, the Black Bears on an unorthodox triple to shallow left. A shallow line drive to left field looked to be caught by left fielder Niko Khoury, but was then ruled as a hit. Weber advanced to third on the play due to the Sweets holding the ball and not knowing if the play was still live.

That triple set up cleanup hitter Henry Muench, who launched a two-run home run four pitches later over the scoreboard in left to make it 3-1 Black Bears.

The Sweets responded with a two-run home run over their own to tie it up at 3 in the bottom half of the inning. Eli Paton sent a fly ball over the right field fence for his first round tripper as a Sweet. Paton is now the sixth Sweet to hit a home run this year.

From the eighth all the way to the 15th, a bullpen battle ensued. For the next six innings, neither team mustered up a run. Nick Irwin turned in his best outing of the season in relief, going 5 1/3 scoreless innings while striking out a season high three hitters.

Cowlitz once again had a strong outing bullpen wise. The Black Bears, who entered this series with the second best bullpen ERA in the league, got 8 2/3 innings of two-run baseball from their relievers after their bullpen did not allow a single run in game two of the series.

Cary Arbolida ultimately picked up the game-winning single for the Black Bears on a hard ground ball into shallow left field in the top of the 15th. Jeff Nelson picked up his first win as a Black Bear while Noah Serna was hit with the loss for Walla Walla.

The Sweets return to Borleske Stadium Friday night to face the Northwest Star Nighthawks starting at 7:05.