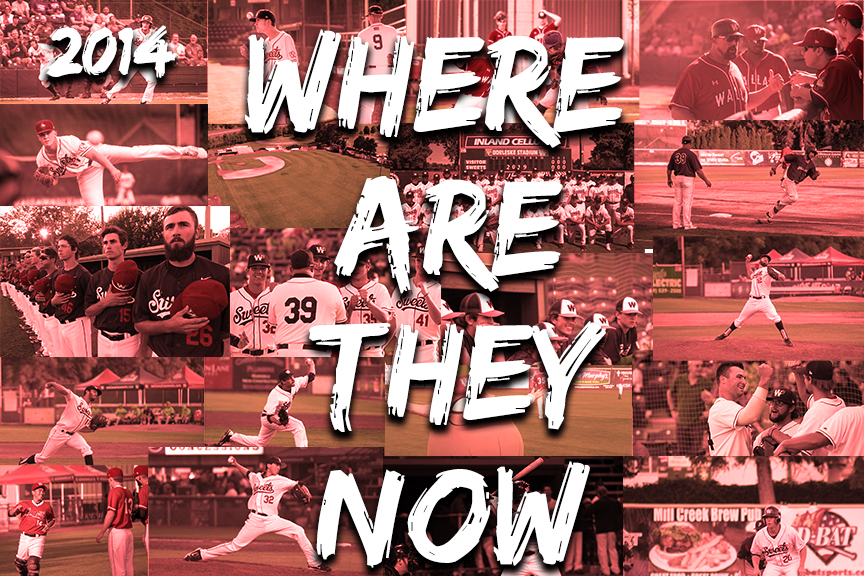 The next edition of the “Where Are They Now Series” examines the 2014 Walla Walla Sweets, the fifth team in the history of Walla Walla baseball.

After a promising campaign in 2013 that brought home the second division title in four seasons, the Sweets were unable to replicate that success in 2014. Walla Walla was unable to overcome a tough start to the season, but still managed to finish the year over .500 at 28-26. The Sweets found their rhythm toward the end of the year, winning seven of their final nine games.

The Sweets offense featured several star players across the lineup. The lineup was highlighted by Michael Duarte and Andrew Mendenhall. Both players were in the top-10 in the West Coast League in batting average. Duarte led the way with a .353 average and struck out just 17 times in 136 at-bats. Mendenhall was one of the most feared power hitters in the WCL. The Washington native hit .349 and led the team in runs scored (39), home runs (8), RBI’s (39), doubles (17), stolen bases (4) and hits (73. The offense hit 44 home runs as a team and had nine different players hit .270 or greater.

The Sweets had plenty of memorable moments throughout the 2014 season. The most memorable of those moments came early in the season in a game against Kitsap. As a Kitsap player was attempting to steal third on a hit-and-run, the backswing of the batter hit the catcher and forced him to make an errant throw. The umpire, however, did not rule the play batter’s interference and the runner came home to score.  The crowd and caching staff of Walla Walla erupted, causing manager J.C. Biagi to emerge from the dugout and argue with the umpire.

As Biagi went back to the dugout, pitching coach Mark Michaud yelled “Get the call right ump!” to the home plate umpire. After an ensuing argument, Michaud was ejected.

Later in the game, Duarte was hit in the back by a pitch, was not rewarded first base. The home plate umpire felt Duarte did not make an effort to get out of the way of the pitch. Biagi was then ejected for arguing this claim by the umpire, with the Walla Walla crowd erupting in cheer to support the claims of the coaching staff.

After five seasons that included two playoff appearances and a trip to the WCL Championship Series, Biagi stepped down at the end of the season. Following the 2014 campaign, the Sweets hired former MLB pitcher Frank Mutz as the new manager, beginning a new era of Walla Walla baseball.

Garrett Barker is currently a Broker Account Executive at UnitedHealth Group in California.

Sean Bouchard is currently in Triple-A with the Albuquerque Isotopes, an affiliate of the Colorado Rockies.

Ryan Littlefield was named the skipper of R.A. Long High School baseball in September of 2020.

Andrew Mendenhall was selected to multiple All-WCL teams and All-Star games from 2011 to 2013.

Parker Osborne was recently an assistant coach at UT-Arlington out of the Sun Belt.