Second set of brothers to play for Walla Walla 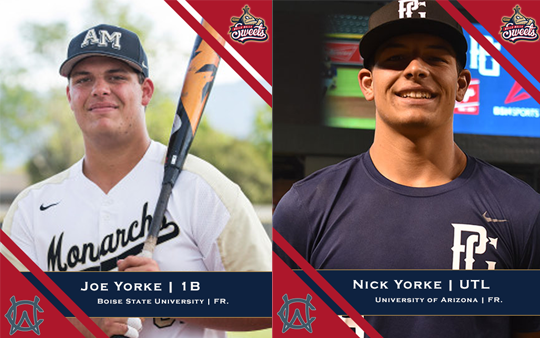 The Sweets announced another pair of brothers will join the squad in 2020 Tuesday, as Nick and Joe Yorke will play their summer ball at Borleske Stadium.

A freshman at Boise State and native of Campbell, California, Joe made an immediate impact in his first year as a Bronco. In 12 games he hit .275 and was tied for fifth in the Mountain West Conference with a .463 on-base percentage.

While his season was unfortunately cut short due to the COVID-19 pandemic, Joe said he learned a lot in the short time he was able to play, including how to step up and help his team in different facets of the game when someone is having an off night.

“My biggest takeaway from my 12 games this season at Boise State is how important it is to play as a team and pick each other up,” Yorke said. “This is what allowed us to be successful over the few games we were able to play.”

Outside of playing baseball, Joe enjoys playing golf, playing the guitar, which he has known how to do since he was six years old, and rooting for the Los Angeles Angels.

Nick, a soon-to-be graduate of Archbishop Mitty High School and one of the top prospects in the 2020 class, is committed to the University of Arizona to continue his playing career in the Pac-12. He said the coaching staff stood out the most to him during his selection process.

“The second I stepped on campus I had a gut feeling and knew I wanted to be there in the coming years,” Yorke said. “The coaching staff was great to me and we built a very comfortable relationship.”

Despite both their seasons coming to unexpected ends, the two brothers continue to polish their game and stay sharp for when baseball does return. Nick has a batting cage set up in his backyard and routinely plays catch with his younger brother.

Even though Joe and Nick compete with each other often, Nick said it motivates them both to be better. Nick also said his brother’s leadership stands out the most to him.

“We compete in almost anything we can, but he is one of my best friends and I learn a lot from him,” Yorke said.

The Sweets season is still scheduled to begin Friday June 5  against the Kelowna Falcons. First pitch is set for 6:35.