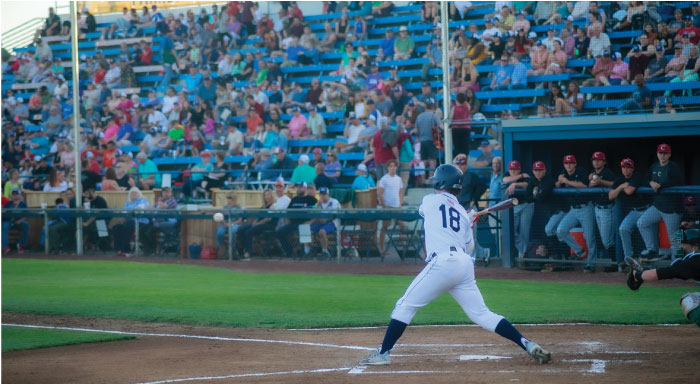 Walla Walla’s Patrick Caulfield smashed a three-run, fifth-inning home run Tuesday night that lifted the West Coast League South Division-leading Sweets to a 3-2 victory over the Portland Pickles in the opening game of a three-game series at Borleske Stadium.

Caulfield’s 376-foot blast was a mighty blow indeed and came on a night when the home team, now 9-1 on the season, was in desperate need of such a swing. Walla Walla managed just one hit through the first four-and-a-third innings and three for the game.

Sweets starting pitcher Travis Craven and his opposite number – left-hander Michael Newstrom – came away unscathed in the first inning. Craven retired the Pickles in order and Newstrom only allowed a two-out walk to Justin Folz, who entered the game as the league’s leading hitter.

John Jensen led off the Portland second by getting aboard on a three-base error. He scored when Darius Perry bounced out 5-3.

The Pickles utilized little ball to plate their final run of the game. Jensen singled to lead off the fourth inning. He stole second, advanced to third on a wild pitch, and crossed home plate on a Gabe Skoro grounder up the middle that Sweets shortstop Parker Price fielded behind the second-base bag to get the out at first.

Newstrom exited after four innings and was replaced by Trent Bixby. Left fielder Ben Fariss and catcher Caden Cortese, both making their 2019 Walla Walla debuts, earned back-to-back walks to begin the home fifth. One out later, Caulfield drove a Bixby delivery over the left-field wall for what turned out to be the final tallies of the night.

“At 2-and-2, I was looking for a breaking ball to fight off,” Caulfield said. “He threw a fastball in, I love fastballs in, and I hit it for a home run.”

Craven (two innings) and fellow pitcher Landon Boeneke (two innings) gave up a run apiece while on mound duty. Ty Hueckman, who earned the victory,  tossed the next two frames and Brennan Patterson, Nick Irwin, and Reid Sebby hurled one frame each. The group combined for 11 strikeouts.

Hueckman gave up two hits over his two innings and Patterson sent Portland down 1-2-3 in the seventh.

“I went out there with a different mentality,” Patterson said. “I had struggled the last couple of outings. (Manager Frank Mutz) told me to ‘go out there like you own it’ and I pitched well.”

Irwin got off to a rocky start in the eighth. He walked lead-off hitter John Arndorfer on four pitches. Arndorfer moved to second on a sacrifice bunt by Alex Lambeau, who crossed the first-base bag safely on the play thanks to a Walla Walla error. Then Irwin experienced a reversal of fortune when Kyle Manzardo, the WCL’s ninth-leading hitter, bunted to the left of home plate. Cortese pounced on the ball and threw a seed to Folz at third to force out Arndorfer. Jensen flew out to left field for out No. 2, and Irwin – with guts and a side of grit – fanned Perry to retire the side.

Sebby started the ninth by striking out Skoro. But back-to-back singles by pinch-hitter Chase Luttrell and Colton Cassinelli, coupled with pinch-hitter Jon Burghardt being hit by a pitch, loaded the bases. Following adversity, Sebby displayed similar traits to those of Irwin an inning earlier when he got Arndorfer to hit into a 5-4 fielder’s choice and Alex Lambeau to ground out to second to end the game.

“Pitching is all about limiting mistakes,” Sebby said. “When things go bad you can’t roll over, but instead make pitches.”

“The big difference between tonight’s pitching and the last night in Wenatchee (an 11-10 Sweets loss) was our pitchers attacked the strike zone,” Mutz said. “We had a pitcher’s meeting (Tuesday) and talked about demeanor on the mound. Sebby willed himself out of it.”

The middle game of the three-game series is Wednesday night at 6:35. 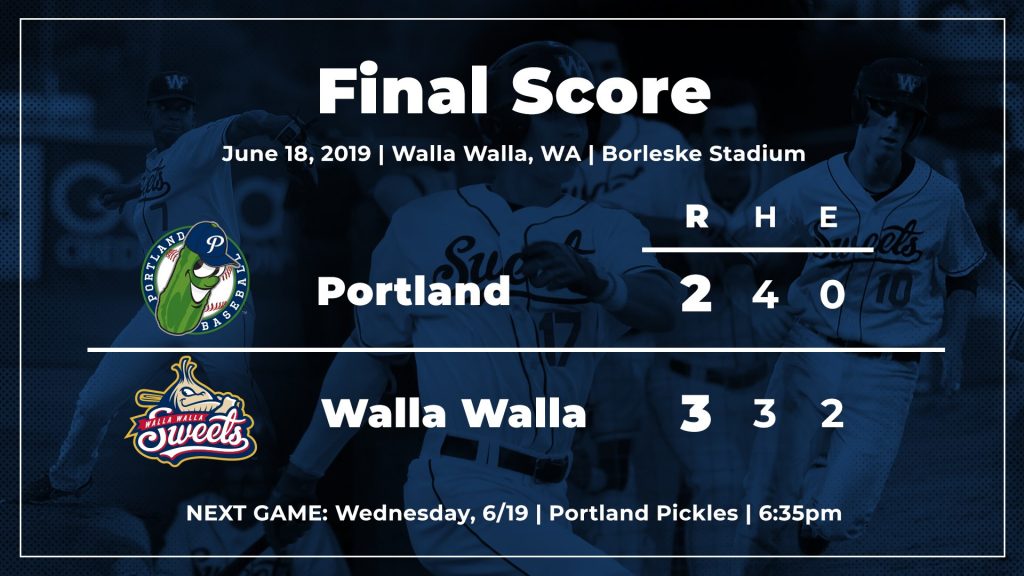