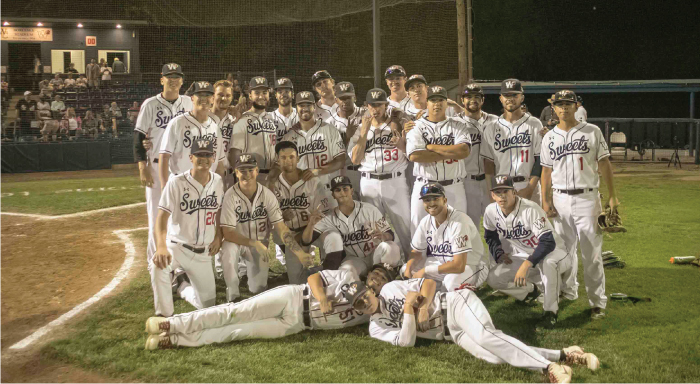 The Walla Walla Sweets have proven that they are no different than a lot of sports teams in their first nine years of West Coast League existence.

Walla Walla has experienced both, to coin a phrase, “the thrill of victory, and the agony of defeat.”

The Sweets experienced growing pains in their first year as a WCL member. Walla Walla, managed by current general manager J.C. Biagi,  stumbled out of the gate and were 7-21 just past the midway point of the 2010 campaign. However, Walla Walla went 11-9 in its final 20 contests and ended the year 18-30. Fans stayed loyal throughout the summer. So much so that the Sweets were No. 1 in the league in attendance – averaging 1,200+ fans per game. Team founder and first general manager Zachary Fraser was named WCL Executive of the Year, and the team was recognized nation-wide as the winners of the Best Marketing Campaign among summer collegiate baseball teams.

Year two produced eight more wins and an appearance in the postseason. The Sweets surprised Wenatchee two games to none before bowing to Corvallis by a similar margin. Middle infielder Alex Stanford (Gonzaga) became a West Coast League star as he set a then league record for hits in a season (66) and was named the league MVP. Five of Stanford’s teammates also received WCL  recognition. Andrew Mendenhall (Lewis-Clark State) and Tim Culligan (Nevada) were named to the second team while Ryan Richardson (Campbellsville), Elliot Stewart (Cal Poly), and Brett Watson (Walla Walla C.C.) received honorable-mention acclaim.

A 24-30 record in 2012 wasn’t a highlight, but the team did set a new standard with the hosting of the WCL All-Star Game. An event that was previously just about the game became a city-wide celebration, with a downtown block party the night before. Fans enjoyed dunking then-manager J.C. Biagi in the dunk tank and the WCL saw what a great community Walla Walla had become. Pitcher Arturo Reyes (Gonzaga) was named to the league’s first team that year and teammates Shane Zeile (UCLA), Brett Jacobs (WSU), and Hunter Virant (UCLA) were honorable-mention choices.

2014 concluded with another winning record – 28-26 – and 6-3 records against both Wenatchee and Kelowna. Mendenhall was named to the West Coast League’s first team, and set a team record for homeruns in a season, Michael Duarte (UC-Irvine) and Jay Flaa (North Dakota State) made the second team, and both Conner O’Neill (Central Arizona College) and Jarod Gonzales (Gonzaga) grabbed the honorable-mention spotlight.

The Sweets slipped to 25-29 in 2017, when Nick Nyquist (Gonzaga) was its lone selection on the WCL’s first team. J.J. Hancock and Chris Lincoln made the second team. Walla Walla returned to winning ways last year to the tune of 28-26. Bryce Moyle (Washington State) was named to the West Coast League’s first team and Nyquist was on the second team. Jordan Hovey (Creighton), Cesar Lopez (Cal Poly Pomona), who smashed a home run in the league All-Star Game, Haydn King (UNLV), Zach Penrod (NW Nazarene), and Darius Vines (Arizona State) proved themselves worthy of honorable mention..

2019 is just around the corner. And there promises to be more intrigue and excitement when Sweets season No. 10 officially begins on June 4.