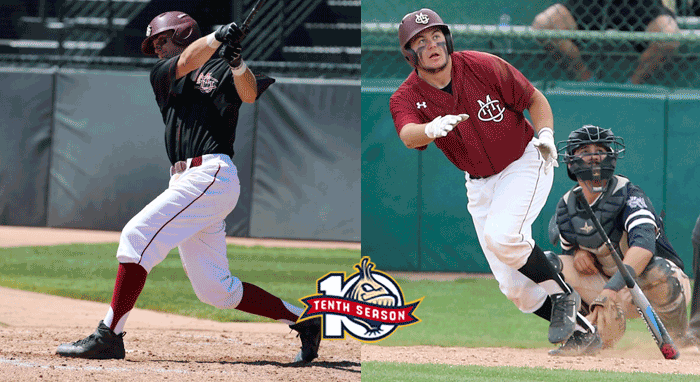 WALLA WALLA – A pair of Colorado Mesa sophomores-to-be, who helped lead the Mavericks to the championship game of the NCAA Division II South Central Regional Baseball Tournament last spring, will hone their skills this summer as members of the Walla Walla Sweets, the West Coast League team announced Thursday.

Both players participated in 42 of the team’s 59 games last season. Stubbings and Farmer started 34 and 32 games, respectively.

Stubbings, who was named the Rocky Mountain Athletic Conference’s Freshman Positional Player of the Year and cited as a second-team selection by the DII Conference Commissioner’s Association in 2018, hit .382 and led the Mavericks in home runs (11), runs batted in (53), slugging percentage (.701), and fielding percentage (.991).

“We are very young going into 2019, but we have a strong (group) of very good players,” Stubbings said. “I’m expecting us to be a top-10 team in the nation.”

Stubbings is as excited to join the organization as the team is to host him during the 2019 summer.

“There’s a lot of talent in the WCL and I have family that lives in the area. It’s going to be a great summer and I’m very excited to play with the Sweets.”


Walla Walla manager Frank Mutz stated that Stubbings, who stands 6-foot-1 and tips the scales at 235 pounds, can pound the baseball.

“We have been recruiting power and on-base percentage, and Stubbings fits the bill,” Mutz said. “He has put up solid numbers over the past two seasons in high school and his freshman year at CMU.”

Farmer, a first-team, all-league selection and the eighth-ranked freshman in DII, posted a .384 batting average and stroked a team-high 15 doubles.

“All I wanted to do was make the travel squad and help the team,” Farmer said. “My freshman year went better than I ever expected.”

“The goal is to win the national championship,” Farmer said. “We have the talent to do it.”

Like Stubbings, Farmer is looking forward to putting on a Sweets uniform.

“I’ve heard a lot of good things about them and have friends who played against them in the WCL,” Farmer said. “My goal this summer is to take my game further and hope to open some eyes to some of the scouts…and to make new friends and some good memories.”

Mutz said Farmer is an outstanding athlete who will shore up the middle of the Sweets lineup.

“He hits for average, has a high OPS, and can hit with power,” Mutz said. “Caleb has proven to be consistent through his young career offensively, which is what we are looking for for the 2019 lineup.”

Among the flurry of baseball activity the Walla Walla Sweets also opened up single game ticket sales on Tuesday for fans looking to take advantage of early selection opportunities.