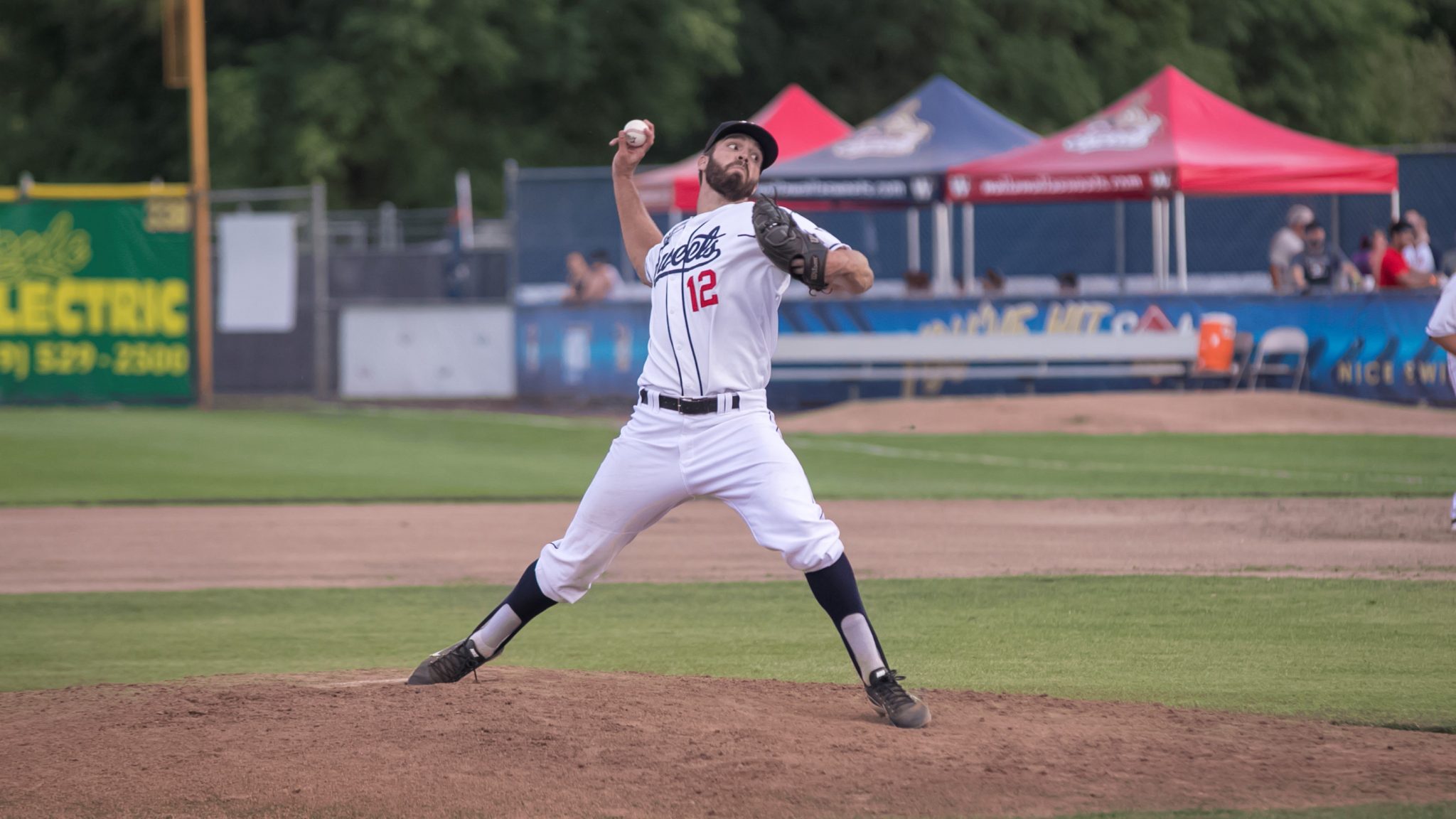 Walla Walla, Wash. – Sometimes all it takes is one good inning for a team to win a ballgame. The Sweets tallied all their runs in the bottom of the fifth to defeat the River City A’s on Friday night by a final score of 3-1 at Borleske Stadium.

Carson Woolery got the start for the Sweets in the non-league matchup and put together a truly impressive performance. He ran into some trouble several times, but that was when he was at his best as he battled through some tough innings.

A single and a walk to leadoff the top of the third put two runners on right away off Woolery. Then a balk moved both runners into scoring position at second and third with nobody out.

Woolery stood tall and wound up striking out the next three batters consecutively to strand both runners in scoring position which kept the game scoreless.

In the top of the fifth, the A’s once again tried to strike first with the score still 0-0. With runners on first and second and two outs, they executed a double-steal to put both runners in scoring position at second and third.

Then the ball was hit into the hole at short, but Quentin LaFontaine made a savvy play. Recognizing he had no shot at first, LaFontaine threw the ball to third base where Josh Kutzke slapped the tag on the runner before the runner from third had crossed home plate.

As a result, River City wound up without a run on the play as the Sweets got out of the inning while keeping the game tied at 0-0. Walla Walla rode the momentum from the big play to end the inning right into the bottom of the fifth.

Tyson Quolas led off the frame by smashing a double into the left-centerfield gap. He then made a bold play and stole third base while sliding in safely around the tag.

Then LaFontaine dropped down a safety squeeze bunt to plate Quolas from third for the first run of the game to make it 1-0. Mitch Lesmeister then singled through the left side of the infield to reach base with one out.

He promptly stole second base which brought up Matt Elser after a pop-out for an RBI opportunity with two outs. Elser delivered by drilling a double off the wall in left field which scored Lesmeister from second to make it 2-0.

Ben Fariss then strode to the box with another two-out RBI opportunity with Elser still on second. Fariss dropped a sinking line drive into right field which gave Elser enough time to cross the plate safely to extend the lead out to 3-0.

Tanner Cunha took over in the top of the sixth and immediately worked a one-two-three inning. The top of the seventh proved to be a much taller task after a single and a double to the first two batters put runners on second and third with nobody out.

Cunha got a strikeout to the next batter but walked the following hitter to load the bases with one out. He rolled up a fielder’s choice to the first baseman Isaak Gutierrez who wisely threw home to cut down the runner.

So with two outs and the bases still loaded, Cunha punched out Andrew Vargas swinging for the final out to get out of the inning with the lead still at 3-0. The A’s did not go away quietly however as they put together another daunting inning in the top of the eighth.

With Cunha still on the mound, River City got back-to-back singles to put runners on the corners with nobody out. Then Brayden Collier hit a ball just deep enough into left field to allow the runner from third to score on a sacrifice fly to cut the lead down to two at 3-1.

After a flyout to centerfield, Carson Green singled to put runners on first and second with two outs which ended Cunha’s day on the mound. Brian O’Rourke took over and walked the first batter he faced to load the bases with two outs.

Then Chase Oldham smashed a ball deep into right field that looked like it was going to drop in to tie the game or possibly give the A’s the lead. Quolas got on his horse though and flagged the ball down deep in the alley to make the catch and end the inning with the lead still intact.

A walk, a fielder’s choice and another walk put runners on first and second with one out in the top of the ninth off O’Rourke. He then worked a fly out and a groundout to end the game and give the Sweets the win by a final score of 3-1.

Walla Walla plays host to River City for one more non-league matchup on Saturday before heading to the All-Star break. First pitch for game two between the Sweets and A’s is slated for 6:35 PM.