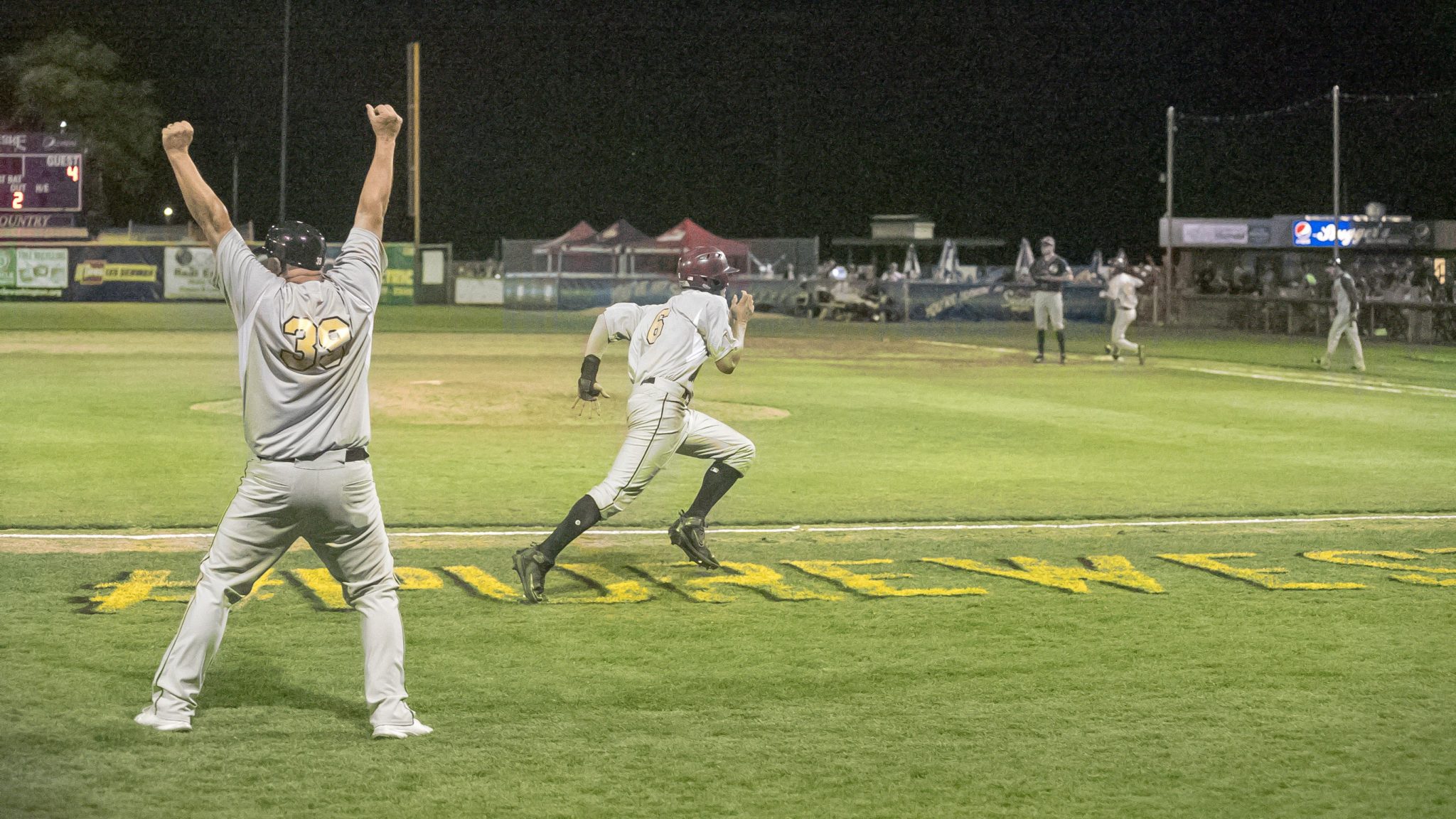 Walla Walla, Wash. – It was fitting that on Adam West Night the Sweets required a superhero-type effort late in the game to come away with the win. Those late game heroics were provided by the veteran Ryan Johnston. His bottom of the 9th, 2-out single through the infield to score Jordan Hovey gave Walla Walla the win in walk-off fashion 5-4 over the Portland Pickles.

The Pickles tallied first in the in the top of the third inning off Sweets starting pitcher Sean Sullivan. Carson Breshears drew a walk with two outs and came all the way around to score on an RBI double off the left field wall by Zander Clarke to make it 1-0.

The Sweets wasted no time in answering as they put together a big inning in the bottom of the third. With one out Walla Walla loaded the bases off Portland’s starter Connor Pellerin on a walk, a hit-by-pitch, and another walk.

That brought Nick Nyquist to the plate. The 2-time All-Star flipped a single into centerfield to plate two runs and make it 2-1. The Sweets were not done yet. With runners on second and third and two outs, Jack Filby ripped a single through the right side of the infield to score both runners and extend the lead out to 4-1.

In the top of the fifth, Portland would respond after Gio Diaz reached on a single to leadoff the inning. He stole second base and then was driven in on an RBI single by Breshears to make it 4-2.

That closed the books on Sullivan’s day on the mound for Walla Walla as he finished with five innings of work, just five hits allowed, and two runs scored.

Portland would add on in the top of the seventh off the Sweets’ Michael Peterson. The leadoff batter in the inning Diaz hit a solo homerun right down the left field line that created some controversy. The ball appeared to glance off the side of the manual scoreboard in left field in foul territory, but the home plate umpired ruled that it hit the foul pole and the call stood to make it 4-3.

Samuel Reed took to the mound in the eighth for the Sweets and he was lights out, just as he has been all year. He struck out the first four batters he faced and kept the 4-3 lead intact with one out in the top of the ninth.

Filby then took over pitching duties but he would ultimately relinquish the lead. He allowed a single to the first batter he faced but rolled up a fielder’s choice to the next batter which put Diaz on first base with two outs. Then on a 3-2 count, Breshears blasted a double into the left-centerfield gap and Diaz came all the way around to score from first to tie the game at 4-4.

It was then the Sweets turn to put together a late-game rally of their own. With two outs in the bottom of the ninth, and down to his last strike, Hovey dropped down a bunt and was able to hustle his way to reach first base safely on an infield single.

He promptly stole second base to advance into scoring position and that set the stage for the exciting conclusion. On another 3-2 count with two away, Johnston poked a ground ball through the left side of the infield that split Portland’s defenders, with Hovey sprinting around third and sliding home safely just ahead of the throw to score the game-winning run, giving the Sweets the victory with a final score of 5-4.

Walla Walla will once again host the Portland Pickles for game two of the series Saturday night with first pitch scheduled for 6:35 PM. Lefty Zach Penrod will toe the rubber as the team celebrates the Abbott & Costello routine “Who’s in First”.