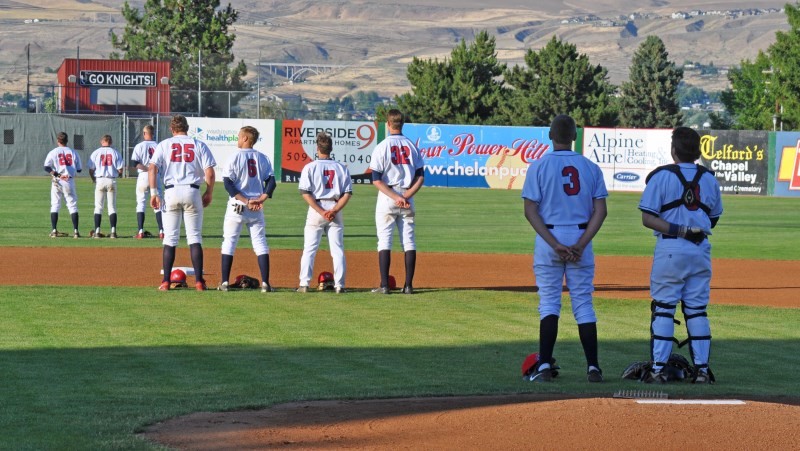 Wenatchee, Wash. – The Walla Walla Sweets took the series opener on the road against the Wenatchee AppleSox by a final score of 7-3. With the win, the Sweets have now won five-straight WCL games and have scored 42 runs during the winning streak.

Walla Walla jumped on the board in the second inning after Tyler Pritchard reached on a single through the right side of the infield and stole second base with one out in the inning. Cesar Lopez then hit a bounding chopper to third base and reached first safely on an infield singer to make it runners on the corners with two outs.

With Willy Chang up to the plate, a ball in the dirt got just far enough away from AppleSox catcher Jordan Rathbone to allow Pritchard to score on a passed ball and advanced Lopez to third on the play. Three pitches later, the ball was wide at the plate and got back to the backstop to allow Lopez to score easily on a wild pitch and make it 2-0 in favor of the Sweets.

Back for his second year with Walla Walla, Dylan Riddle got the start and threw three strong innings. He finished with three strikeouts and only surrendered one hit, albeit a solo homerun to Wenatchee’s Jake Taylor, which made the score 2-1.

The Sweets tacked on in the top of the sixth after three straight singles loaded the bases to start the inning. Danny Sinatro then reached safely on an error by the AppleSox shortstop which scored a run and kept the bases loaded with still nobody out.

Then a ball hit deep in the hole by Lopez resulted in a fielder’s choice at second but pushed across Zach Penrod at the plate. So with one out and runners on the corners, Chang dropped down a safety squeeze bunt and was thrown out at first but allowed Pritchard to score stealing from third for the third run of the inning to make it 5-1.

The AppleSox scored a pair in the sixth inning off Brayde Hirai after he surrendered back-to-back walks to start the inning. A single by Johnny Sage back up the middle scored Evan Williams from second for the first run of the inning, and then a sacrifice bunt moved Mason Marenco to third with one away. Rathbone then smoked a ball deep to right field which was flagged down by Penrod but allowed Marenco to score from third to make the score 5-3.

Jack Filby then led off the seventh with a single and Ryan Johnston followed him up with a walk to give the Sweets two runners on with nobody out. Nick Nyquist struck out swinging but then Penrod came up and drilled a single to centerfield to score Filby from second.

On a hit-and-run with Penrod at first, Pritchard would hit into a 6-4-3 groundout with Penrod advancing safely to second just ahead of the throw, which scored the runner Johnston from third to make it 7-3.

Patrick Collins and Samuel Reed were able to keet the AppleSox at bay through the seventh and eighth innings. Then Sean Sullivan took to the mound in the ninth and struck out the side to end the game giving the Sweets the victory in the series opener.

Walla Walla will be back in action tomorrow night for game two versus Wenatchee to try to take the series early with first pitch slated for 7:05 PM.