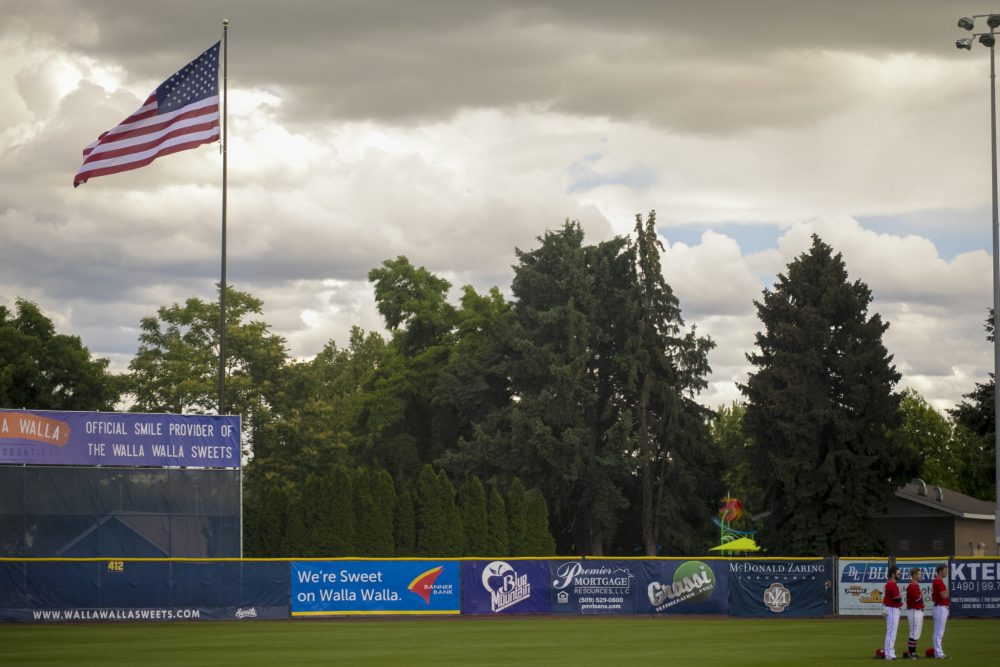 Walla Walla, Wash. – The Walla Walla Sweets had their game scheduled for Saturday night postponed due to rain, which resulted in the team hosting the Corvallis Knights for two seven-inning games on Sunday evening. The Sweets would drop the first game in a pitcher’s duel by a score of 2-1 but would rally in the second game and win a thriller by a final of 10-9.

Bryce Moyle got the start for the Sweets in game one and threw well through two frames but struggled in the third. Briley Knight drilled a ball deep into left field that eluded Sweets left fielder Matt Elser and glanced off the wall, allowing Knight to reach third base with a triple and just one away in the inning.

The next batter Chad Stevens hammered an RBI double to the left-centerfield gap to give the Knights a 1-0 lead. Following a groundout, Cameron Haskell dug in with two outs and punched a single through the right side of the infield to score Stevens and make it 2-0.

The Sweets would go scoreless until the bottom of the seventh, when they tried to spark a late-game rally. Josh Prizina led the inning off with a single through the right side of the infield and was promptly pinch ran for by Tyson Quolas.

The next batter would strikeout, bringing Jalen Garcia to the plate and he smacked a single into left field to give the sweets runners on first and second with one out in the inning. Haydn King would come on as a pinch-hitter and look at ball one in the dirt that got past the Knights’ catcher Austin Baek and move both runners into scoring position at second and third.

King lifted a fly ball into centerfield and in a full sprint, Chandler Anderson would slide in and make a beautiful grab to record the out, but Quolas would tag up from third and advance home for the Sweets first run of the ball game.

Garcia was able to advance on the play as well, so with a runner on third and two outs in the bottom of the seventh Willy Chang strode in as the Sweets’ last chance to try to extend the game. He would battle in his at-bat against newly entered pitcher Eli Morse, but Chang ultimately struck out swinging to end the game and the Knights took the victory by a score of 2-1.

Game two would be a much more high-scoring affair and it did not take long for the offense to show up for both teams.
In the top of the first inning, Knight would double to centerfield with one out and the very next batter Cody Hawken would come to plate and crush a 2-0 fastball off Sweets’ starter Ty Hueckman over the left field fence to give the Knights a quick 2-0 lead.

In the bottom of the first, the Sweets would strike back as they were able to load the bases off Knights’ starter Trevor Wells on a pair of singles and an error. So with no outs yet recorded, Zach Penrod would come up and draw a walk to push across a run and make it 2-1.

That would bring up Prizina, who dug in and promptly smoked a double down the left field line that would plate all three baserunners and give the Sweets a 4-2 lead. Matt Elser would be next as he peppered a ball hard to the shortstop Stevens who was unable to field the ball cleanly and allowed Elser to reach safely and advance Prizina to third.

Following a strikeout and a flyout, Jordan Hovey came to the plate with runners on the corners and two away in the inning and looked at a ball in the dirty that got past the catcher and allowed Prizina to come across to score for the fifth run of the inning to make it 5-2.

Both teams would tack on another run in the second inning to push the score to 6-3 and that’s where the score would stand until the bottom of the fourth inning. The Knights brought on the young right hander, Dennis Boatman who would give up three consecutive walks to start the inning and load the bases with nobody out.

Corvallis would then go to their bullpen once again and bring in Louis Crow, but Penrod would be up to the task as he delivered a two-RBI double off the right field wall to extend the lead out to 8-3. Then with one out and runners still on second and third, Elser would chop a ball to the second baseman with the only play to be made at first which would allow another run to come across on a fielder’s choice and give the Sweets a 9-3 lead.

That comfortable lead quickly evaporated however as the Knights would put together their own carousel inning in the top of the sixth. The first two batters would reach safely on an error and a ground rule double off Sweets’ pitcher Tanner Cunha, which would send Penrod to the mound in relief.
He would surrender a base hit to the first batter he faced, Alec Cook, which would score the first run of the inning. A walk to the next hitter would load the bases, and a single would push across another run and keep the bases loaded with still nobody out.

A strikeout and a fielder’s choice would give the Sweets two outs in the inning, but another run would score on the FC and keep runners on second and third. Haskell would come up for Corvallis and drill a single back up the middle to score both runners and cut the Sweets lead down to one as the inning would come to a close with the score now 9-8.

The Sweets would score a much-needed insurance run in the bottom of the sixth after Josh Kutzke would single up the middle and be pinch ran for by Darius Vines, who would advance to third on a double by the next hitter Elser.

Garcia would then come up and drive a double to left field but only score the runner from third as both runners had to wait to ensure that the ball would not be caught. That unfortunately would be the only run the Sweets would scrape across in the inning, but fortunately it would be just enough.

In the top of the seventh, Samuel Reed would come on in relief for Walla Walla and surrender a walk, get a strikeout, then another walk to make it first and second with one out. That would send Jack Filby to the mound to try to close out the game and seal the victory.

He would give up a base hit to the first batter he faced and load the bases with still one out. A ground ball to the newly entered shortstop Quentin LaFontaine would be flipped on to the second baseman for a fielder’s choice and the second run of the inning, but a run would score and cut the Sweets lead down to one.

So with two outs and the tying run just 90 feet away at third base and the go-ahead run on first, it would be Filby against Knight for the biggest at-bat of the game. The talented UCLA commit Filby would win the showdown as he would strikeout Knight swinging on three pitches to end the game and give the Sweets the victory in a thrilling, rollercoaster of a game by a final score of 10-9.

With the split in the doubleheader, the Sweets were able to take the series against the Knights 2-1. Walla Walla will be back in action on Tuesday as they open up a two-game non-league series at home against the Highline Bears with the first game scheduled to begin at 6:35 PM.