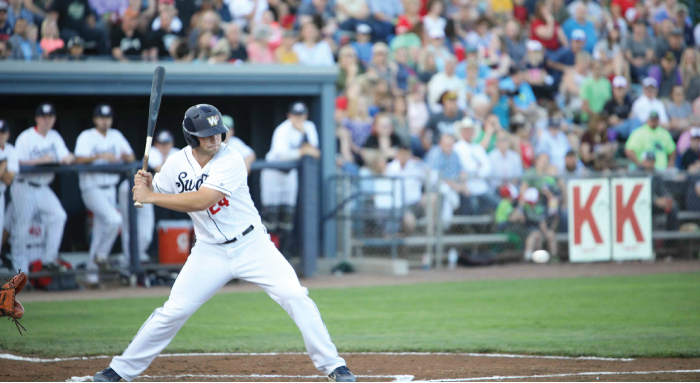 Walla Walla, Wash. – Opening Day is coming – now just a month away. The team’s home opener will be on June 8 and is being presented by Chrysler Dodge Jeep Ram of Walla Walla and is set to be bigger and better than ever.

“Opening Day has become one of the coolest traditions that we have with the Sweets, as it has become such an event in and of itself,” said Sweets general manager Dan Ferguson. “It is always exciting to begin a new campaign at Borleske. The electric atmosphere on Opening Day generated by the Sweets faithful who pack into a sold-out stadium is really something special to behold.”

There will be two giveaways on Opening Day, as the first 1000 fans will receive a Walla Walla Sweets baseball cap, and 2018 Sweets Magnet Schedules will also be available courtesy of the Union-Bulletin and KTEL 1490. The Jumpin’ Jelly Beanz Summer Fun Zone will also be active that evening for youngsters to run around in and explore throughout the game.

The biggest news will be the formal unveiling of the new 3rd base concourse and grandstand. Continuing with the history of improvements to the historic ballpark, the finished product will feature new food options (garlic fries, shrimp po’ boys, fish and chips, and shaved ice), a dunk tank, and improved 3rd base grandstand seating.

“We’re never finished improving the ballpark,” said Sweets president Zachary Fraser. “However, this feels like a big step forward in improving the experience for our fans – one that was always in the back of our minds when we started at Borleske in 2010.”

Fireworks are back and better than ever at Borleske, starting on Opening Day, as they will take place following the conclusion of the game.

“It really is the way that our community kicks off summer – Sweets at Borleske,” said Fraser.