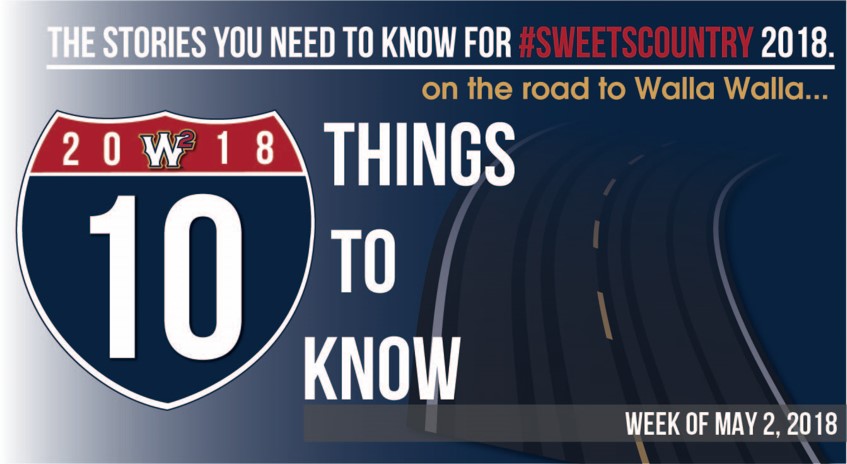 With the Sweets home opener just a little over a month away, stay up to date with how our players are performing as they wind down the college season with another edition of “10 Things to Know”!

1. In a late week series, Zach Penrod (OF) helped lead Northwest Nazarene University to win three out of four games against Concordia to keep their GNAC Championships hopes alive. He appeared in all four games and went 9-for-16 with a double, five runs scored, seven RBI, two walks, and on Monday, was named GNAC Baseball Player of the Week.

2. Saint Martin’s University should not feel badly that they could not slow down Jalen Garcia (OF) as seemingly nobody has been able to this season. Montana State University Billings split a four-game series with SMU this weekend, but Garcia went 9-for-18 with two doubles, two triples, a homerun, four runs scored, six RBI and three stolen bases. He is now batting .380 on the season for the MSUB Yellowjackets.

3. Jake MacNichols (C) continued to show off his extra-base hit prowess as Santa Clara University won two of three games against the University of San Francisco over the weekend. MacNichols appeared in two games and went 4-for-7 with two doubles, a homerun, three runs scored, five RBI, a walk and a stolen base.

4. Harvard dropped two of three games in an Ivy League conference matchup against Cornell this past weekend, but Jake Suddleson (OF) still had a strong showing. He went 4-for-12 in the series with two doubles, two runs, three RBI, two walks and a stolen base.

5. Tanner Cunha (LHP) helped wrap up a three-game sweep for Sacramento City College as they took down Folsom Lake College in action last week. He appeared in the final game of the series and struck out two over 1.1 innings of work and earned the win.

6. Washington State University lost their matchup on the road against Seattle University last Wednesday. Bryce Moyle (LHP) limited the damage for the Cougars, however, as he came in and only allowed two hits in 2.0 innings of work and added a strikeout without surrendering a run.

7. Jack Filby (Utility) has been flying around the bases as of late for C.K. McClatchy High School. Over his last two games, Filby has two triples to go along with two RBI. On the season, he carries a .368 batting average with a 1.096 OPS.

8. Richmond University won two of three games in an Atlantic 10 matchup against the University of Dayton and senior captain Vinny Capra (IF) played a key role in the team’s success. The former Sweet finished the series going 6-for-13 with a homerun, four runs scored, three RBI, two walks and a stolen base. He now has a .335 batting average on the year.

9. After a four-game slide in the middle of April, Frank Mutz has Chaminade College Prep back on track as they begin to look toward the postseason. They are 6-2 over their last eight games and have a 19-8 record with three games remaining in the regular season.

10. A series where Sweets fans will have the chance to see several 2018 players in action will be when Central Washington University travels to take on Montana State University Billings in a four-game series on Thursday (5/3) and Friday (5/4) of this week. Jalen Garcia (OF) and Carson Woolery (RHP) will look to defend their home turf for MSUB as Mitch Lesmeister will oppose them for CWU. There will be double headers played on both days and more information on the games can be found here: LINK TO SCHEDULE