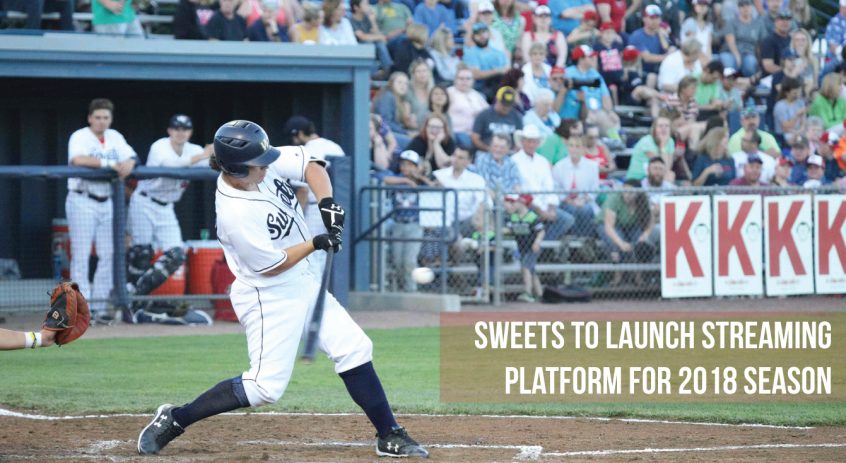 Walla Walla, Wash. – Sweets’ fans will have the chance to follow the team’s home games in a new way this year which will allow them to see more of the action. The club has announced that they will be launching live-video streaming of all games at Borleske Stadium for the 2018 season.

“We are thrilled to bring the production of a video broadcast to Walla Walla fans this season,” said Sweets general manager Dan Ferguson. “The tremendous crowds and electric atmosphere at Borleske will now be brought directly to fans across the country and the world. We are confident that Brandon [Pavlina], our broadcaster, will be exceptional at calling the action on the broadcasts as fans that can’t be in Borleske, for the first time, will be able to follow the games via video.”

The move to incorporate a video broadcast at Borleske Stadium is in conjunction with a WCL-wide initiative to bring a visual medium to each ballpark in the league. Starting with the Sweets and the Yakima Valley Pippins launching a rudimentary Periscope broadcast in 2014, the process was greatly improved when the Victoria Harbourcats brought a multi-camera platform to the league in 2016. At the 2018 Winter Meetings in Portland, the WCL board of directors approved an initiative to help each club capitalize a video-stream service in each park. For the 2018 season, it is anticipated that all clubs in the league will have some variety of a live-stream available to fans.

The Sweets video broadcast will be a single-camera operation in 2018, traditional to what is seen with many colleges across the country. Development is already in place to allow for a multi-camera broadcast in the 2019 season. The video stream will be a simulcast of audio from award-winning Sweets’ radio broadcasts on KTEL Fox News Radio 1490 AM and 99.7 FM with new, separate advertising opportunities available through the video platform. The video broadcast will be a pay-per-view style format for fans with season and single-game passes available starting in May.

The live-video stream is being built with the partnership of the Sweets with Rob Snow and Michael Sanders of Walla Walla. Snow and Sanders have been part of developing streaming entertainment options throughout the Valley over the past five years, including Whitman Athletics. The Sweets have opted to use Boxcast, a comprehensive cloud-based solution that includes a full production suite to allow for a great viewing experience.

This platform will also allow the Sweets to extend their long-standing working relationships with local high schools and colleges, as this new initiative creates paying jobs for developing multi-media and video production students. This is the aspect that most excites Sweets president Zachary Fraser.

“Similar to what we have been able to do for players and developing sports marketing professionals, this project will both fill a need for our customer, as well as create development opportunities for young men and women in our community that are interested in sports broadcasting,” Fraser said.

Twice this season, the Sweets will be featured as the WCL Game of the Week where the broadcast will be shared league-wide via the WCL website. These dates will be Thursday, July 19 against the Bellingham Bells and Thursday, August 2 against the Kelowna Falcons.

“I’m very excited to be a part of the Sweets this season and cannot wait for the opportunity to bring a visual broadcast to Borleske Stadium for the first time,” said Sweets broadcaster and media relations manager Brandon Pavlina. “I have had a great deal of experience with simulcasts and am confident I will be able to utilize that experience to provide an engaging and insightful viewing experience for Walla Walla fans.”